If you followed my blog as I found my birth family, you might remember my half sister Carol.

My birth mother didn’t want to meet me when I first contacted her, but she did give me the name of my birth father. He had died in 1996, but I tracked down his daughter Carol. I called her and told her who I was and why I was calling. “I think that makes us sisters”, I said, not sure what kind of response I would get from this stranger on the phone after I’d told her that her father had an affair in 1968.

She was the first member of either side of my birth family to meet me and welcome me. 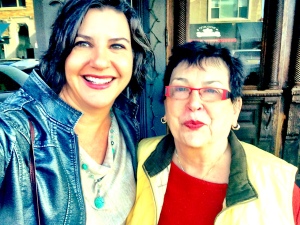 And when I got my DNA results back, and discovered my birth mother had been wrong about who my birth father was, I called Carol and told her about it. I asked if she’d be willing to take a DNA test so I could figure this out. She said, “sure, I’ll take the test, but I don’t really care what the results say. I’m keeping you. You are family”.

Carol died today. And I’m heartbroken. She and her amazing family welcomed me in to their family with such generosity and abundance that it forever changed me for the better. Her openness to welcome a stranger and immediately make room for me in her life was a masterclass in hospitality.

I’m so thankful my birth mother didn’t know who my father was because it led me to Carol. To have been her sister these past seven years has been such a gift. 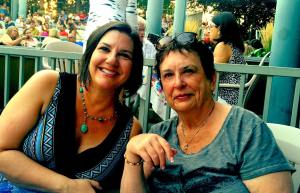 at Idaho Shakespeare when she visited me in 2015.

In gratitude for the gift of her life, I’m raising a glass, which she would have surely joined me in doing.

And I’m lifting up a prayer of gratitude for her life, her laugh, her big heart, her ability to wear lipstick so well, and for the way she claimed me as her own. My prayers are with Amy, Marc, Sally, Kelsey, Kayla, Kamryn, Brady, and Jessica as they mourn her death. She loved you all so much and was so proud of each of you. What a gift to have been loved by Carol.

“I’m keeping you”, Carol told me. May we all live lives where we claim and keep people close. Be like Carol.

May her memory be a blessing.