Like many of you, I watched the Super Bowl Sunday night. Even though my team (Go Seahawks!) had been eliminated in the play offs. Even though I’m a little horrified by the violent injuries in the game which lead to brain injury and trauma for these gladiators we call athletes.

But I dutifully tuned in Sunday night to watch the show, for an excuse to eat nachos, to see the commercials.

And ended up receiving the gift of Beyonce’s halftime show.

I confess, her style of music is not really “my thing”, so I don’t know her entire oeuvre. I’ve seen her on SNL. I’ve seen her in pop culture. She has always seemed to have a shrewd business mind, and understanding of how to “brand” herself and her image. She can dance. She married Jay Z. That was the extent of my Beyonce knowledge.

But you can call me her NUMBER ONE FAN after the Super Bowl. She was in control of that crowd from the minute the lights caught her silhouette.  She was beautiful. Strong. In control. Putting on a SHOW. She was generous on the stage—sharing it with musicians, with her former Destiny’s Child partners, and with all of the other dancers. There was room enough for them because there was abundance in her performance. There was more than enough awesome to go around.

As I watched the show with my teenaged sons, I was glad they were seeing a strong woman, in control of her own image, doing what she wanted to do.

And then Facebook and Twitter lit up with people who hated the show. I wondered, “what show were they watching?”

One person said, “if she had just worn more clothing, then people could have appreciated her performance.” 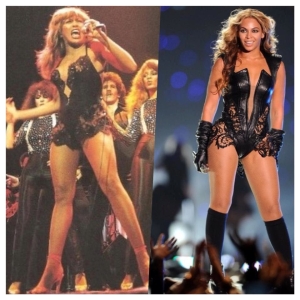 What was wrong with her outfit? It was very similar to something Tina Turner wore in the 70s. It covered more of her “bits” than many figure skating and gymnastic outfits the Olympic athletes wear. It covered far more than the Olympic Beach Volleyball players “uniform” does, for sure.

And as I’ve been thinking about those different reactions about an outfit, often by people I love, admire, and respect, I wonder just how many clothes she needed to have on in order to not offend people.

If she’d been wearing a turtleneck, a sweater vest, and mom jeans, would that have been acceptable?

How about one of Hilary Clinton’s pantsuits?

I love what I find in google searches…

Is a skirt okay, or should her legs have been completely hidden?

What about form fitting? Would a blousy top have been better?   I’m guessing cleavage is right out. 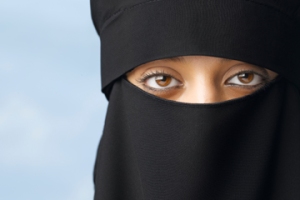 Cover up those eyes! The woman is still too beautiful.

But here’s the thing. You could have covered Beyonce up in a burqa and she still would have owned the night. Because what Beyonce displayed on that stage, in addition to her beautiful body, was power, strength, and comfort in her own skin. And that is dangerous.

People accuse a woman of causing a power outage at a football stadium, and we think they are talking about her lack of clothing? Come on, folks.

I’m no Beyonce, alas, but I face a similar dilemma—what to wear when I go to church. When I preach, I wear a robe so my clothing choice is erased from the equation. I love the anonymity of the robe, actually. But I can’t always wear the robe, and it is hot and unwieldy if you are trying to run in the foothills. I would look odd if I were to show up at the hospital for a pastoral care visit while robed.

Yesterday, for example, I was in a sartorial quandary. I was at the State Capitol yesterday at lunch, speaking in favor of legislation that would add gay, lesbian, and transgender as protected categories in the Human Rights Act in Idaho. Honored to be a part of it. No idea what to wear.

I have a suit. I could have disappeared into that outfit and become anonymous, genderless, and invisible in the halls of the capitol building.

Or I could have worn the clothes in which I am comfortable—a dress and black leather boots. I would not be anonymous, genderless, or invisible in the halls of the capitol building in my usual wardrobe.

If I wear a suit? “She’s too mannish. How pathetic to see a woman trying to work in a man’s world”.

If I wear the pretty green dress? “That’s not how a preacher should look. Ministers aren’t supposed to be sexy.”

If only my black-leather-and-lace-Beyonce-Tina-Turner-get-up weren’t at the dry cleaners….

This article was also published at There is Power in the Blog.