Leviticus 25 spells it out in more detail. In Leviticus, we are also take every 7th Sabbatical year (7 times 7 is 49, if math hasn’t changed since I was in school) and make the next year, the 50th year, a Jubilee year, where the level of re-setting is even higher.

It sounds great, doesn’t it?

The idea that if we were burdened by debt, we could get a fresh start, and get out from under the weight of our mistakes, our bad luck, those situations in life that sometimes happen.

I think about people I know with medical debt. What would jubilee be like for people who need to consider bankruptcy after an uncovered emergency surgery?

I think about people I know with big college debt, trying to start out their adult lives, seeking jobs with big salaries to service their debt, when perhaps they’d prefer to be teaching or going into ministry—jobs that matter but might not pay the bills. What would jubilee be like for them?

As you may know, one of our sons is in law school right now. And he is trying to do it with a manageable level of debt, but it is expensive to go to law school, even with scholarships. Or medical school, for that matter.

If you want to serve underserved communities, do legal aid, or free medical clinics—how possible is that, do you think, if you have crushing debt from your education? How many new lawyers and doctors have to chase the big salaries, the specialized practices, in order to pay off their loans?

I suspect most of them go into those fields to help people, but get sidetracked because of debt.

What would jubilee be like for the world, if more people were free to care for people without worrying about paying bills?

It may be easier to be enthusiastic about the remissions of debt for other people, by other people.

As we know, the companies who own the debt don’t tend to embrace the idea of debt relief every seven years ‘because the Lord’s remission has been proclaimed’.

And there are some debts that engender compassion in us. And some that don’t. We probably feel better about releasing debt for someone burdened with medical bills than we do for someone who consistently lived beyond their means, acquiring debt for things they couldn’t afford, choosing to spend money they didn’t have.

God doesn’t want us to play that game, though, where we decide whose debt is worthy of repayment and whose isn’t. ‘You should rather open your hand, willingly lending enough to meet the need, whatever it may be.’

The idea of jubilee also loses some of its luster when we think about having to forgive the debts that other people owe to us.

I trust I don’t have to elaborate further on that, right?

We want justice where we are concerned, but we’re happy for generosity when it involves other people.

People talk about ‘biblical values’ often in our cultural wars, but jubilee is never the biblical value we lift up, is it?

Jubilee may be the most radical idea of God’s, other than dying to conquer death. There were kings in the ancient Near East, and probably today too, who would free prisoners, or erase debts, or offer huge tax cuts. They would claim it was for the people, but it happened only on their whim, and likely when they needed support in the polls.

To systematize the release of debt as jubilee intends to do, to put it on a calendar that would outlast term limits, and to expect the people on the streets to do for each other what God is doing for them—that’s different.

We even  say the words each week in worship.

And forgive us our debts, as we forgive our debtors.

Jubilee is written into the Lord’s Prayer.

We may think this doesn’t have much to do with us. Most of us don’t have vast sums of money we’re loaning out to others. We don’t have slaves we need to set free. But I’ve observed a few places lately where we’ve forgotten our jubilee.

A number of presidential candidates have spoken about educational debt relief. Here are the first comments on an article from CNN about the proposal.

And this is why you never read the comments.

There are certainly legitimate questions to be asked about how debt forgiveness could/should/would work. And it is a fair question if the government should be involved or not. My observation is merely that a sense of jubilee is missing in our response to the question. Our feeling of justice seems strong and deeply entrenched. Our sense of jubilee generosity could use some attention.

One commenter, in reply to these questions, tweeted: 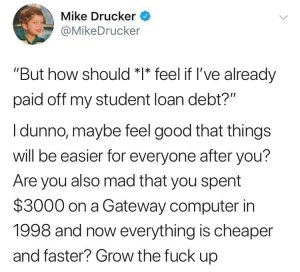 In another situation that’s been in the news, a woman who is transgender has been suing the state of Idaho. She is in prison. She is in need of gender reassignment surgery, but that state won’t pay for it.

The responses to the news stories that I have seen have included:

Why would we pay for that? She’s a criminal.

Should I commit a crime so I can get the government to pay for my cosmetic surgery?

The more compassionate questions I have heard are more along the lines of “I know people in need of gender reassignment surgery who aren’t in jail and who also can’t afford it. Our whole medical system is in need of repair and feels unjust”.

You should rather open your hand, willingly lending enough to meet the need, whatever it may be.

In Jubilee, it isn’t up to us to decide the worth of the debt that is to be repaid.

I understand that gender reassignment surgery may be a new concept for many of us, one we may not understand. (Here’s an article from the American Medical Association about this case.) And the fact that she’s in prison complicates the story too. Using the biblical model, however, the complications of the story aren’t relevant.

I’m not endorsing criminal behavior, but I’ve never spent a minute being upset that prisoners receive access to health care. I have no idea what surgeries, or procedures, or viagra prisoners receive. Yet in this story, we want to have a finely honed sense of justice. All of a sudden, we want to decide who gets cared for and who doesn’t.

I call her the Prodigal Mother Artist Danny Doughty http://www.doughtyfolkart.com/

The other story we heard this morning is a more familiar story, one where a father has two sons. One of them asks for his inheritance now, while the father is still alive. At the least, that’s bad form.

But the father gives it. To both sons.

Bad choices are made by the younger son, debts accrue, pigs are lived with. He comes home.

He receives the welcome of the prodigal. “But we had to celebrate and rejoice, because this brother of yours was dead and has come to life; he was lost and has been found.’”

What the father offers the younger son is Jubilee. What the older son wants is justice.

The older son is every commenter on Twitter. We are the older son when we hear ourselves arguing that we did it all without help, and why can’t everyone else?

We keep seeking what we think is justice. God keeps offering grace.  Sabbath is a weekly, a yearly, a continual effort to turn us back to grace.

We’re quick to look for justice, when we think we’re doing it all right. It’s Sabbath work to look for grace, to have awareness for the times we don’t get it all right, and we get second chances.

And here is the song I sang in the Invitation to the Table at communion this morning:

2 thoughts on “The Justice of Jubilee”