Two Sundays ago, during the time with the children in worship, I was telling them about how Jacob wrestled with God and how his name got changed to Israel in Gen 32. I mentioned other biblical characters who also went through name changes. I told them about a couple in our church who just got married and both took a new last name after the wedding. And I told the kids about how the first month of my life I was called Ann, but was given a new name when I was adopted and became Marcella Ruth.

I told the kids, “I didn’t have to wrestle with God for my new name…” and then I went on and said some other stuff. I have no idea what other stuff I said, because as soon as I heard myself say those words, I started having a dialogue in my own head.

“You have completely and totally wrestled for your name.”

It was a gut punch as I realized the truth of it.

I didn’t have a whole lot of time the rest of the day to wrestle over that thought, but I mentioned it to my counselor (let’s all pause and give thanks for good therapists……Amen) and realized there is so much I don’t know about the name I was first given.

My parents were told by the social worker that employees at the Children’s Home Society of Washington would take turn naming the babies. So, basically I was randomly named by a stranger.  I wonder if my birth mother thought of a name for me. By what name did she think of me when she remembered me? Was it weird for her to discover my name after all of those years, not knowing?

When Jacob wrestled with God, he demanded a blessing. And he received his blessing. But he also received a limp.

It’s been over a year now since I’ve received my original birth certificate. And there has been lots of wrestling. And even new names. I’m grateful for it all. I’ve been blessed. I think I’m also limping a little though.

Even though my birth mother doesn’t want to meet me, she has answered the questions I have asked her. While that doesn’t erase the pain of that continued closed door, it is still so much more than I had before. Learning my birth father’s name–McCourt–has given me a whole new family.

Just this week, one of my cousins from the McCourt family sent me a photo of all of the McCourt cousins in 1961 with their (our) grandmother.  It was so thoughtful of her to send it to me, all labeled with names so I would know who my cousins are. And she even wrote my name on the list, with a “not born yet” next to my name.  To be claimed and included by my birth father’s family means more than I can yet understand.

Thank you for this, Barbara!

I’ve been doing genealogical research on both my birth mother and father’s sides of the family. I’ve found Presbyterians who settled New Jersey on my birth mother’s side. And Scottish roots on both. (See the Young tartan below). 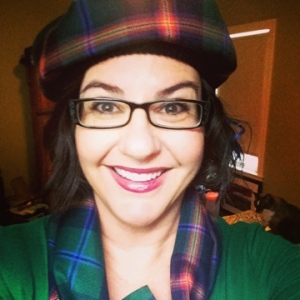 Our son Alden was named, in part, because on my mother’s (real mom, adopted mom–I’ve been wrestling with names here too) side of the family, we are related to John Alden the pilgrim. Turns out I’m a direct descendant of John Alden on my birth father’s side too. Connections to things that feel familiar from the life I was already leading have smoothed the path for me a bit. The resonances I find have helped me deal with the dissonances too.

Now that I can get glimpses of what my life would have been like had I been raised by my birth mother, I’m even more thankful for the life I have lived. The person I am today, the family I have, the children I’ve born–none of that would have happened had I not been adopted. Looking over at my birth family’s lives, I see another time stream, one where I would be a different person, with different experiences, different family, different people, different everything. I’m grateful for the glimpses into it and for the opportunity to be in relationship with my other family.

I also appreciate Jacob’s struggle in new ways. You can’t take on a new name without a lot of wrestling, some blessing, and some pain.

5 thoughts on “Wrestling for my Name”