The day before our story begins, as we heard last week, Peter and John were walking into the Temple in Jerusalem and a lame beggar, who had sat at the gate every day for years, asked them for a handout.

Instead, they healed him in the name of Jesus.

And the man got up, started dancing around, and followed them into the temple. It caused quite a ruckus, as you can imagine. People were impressed with Peter’s prowess. Peter said that it wasn’t about him. Anything he did was through the power of Jesus Christ. There was no healing apart from Jesus, he said.

So, because no good deed goes unpunished, the leaders of the Temple had them arrested.
I read that and think, “I could arrest people?”

But they could arrest people. And they did. So our text picks up when Peter and John are brought before the religious authorities in Jerusalem, after a night in the holy hoosegow. “By what power or by what name did you do this?”

Peter is filled with the Holy Spirit and boldly says, “remember that man you crucified? Well, he rose from the dead, with all apologies to you Sadducees who do not believe in the resurrection of the dead. And despite your lack of belief in him and despite your murdering him, he is still healing people. And this man standing right here next to me was healed in the name of Jesus.”

Ruth Goldthwaite and I once talked about this text, and her brilliant question, which I wrote in the margins of my bible, and which I’m using here, is what happened to Peter? Isn’t he the guy who denied Jesus 3 times before the crucifixion? How did he become so bold?

The authorities don’t like this new Peter. They want him to pipe down and go back to whatever backwater town he’s from.

“For it is obvious to all who live in Jerusalem that a notable sign has been done through them; we cannot deny it. But to keep it from spreading further among the people, let us warn them to speak no more to anyone in this name.”

Aren’t they adorable? Can you imagine any scenario where Peter, the man who just reminded them of their complicity in Jesus’ death, is going to be interested in their warnings to be silent?

Peter can’t seem to imagine that either.

“Whether it is right in God’s sight to listen to you rather than to God, you must judge; for we cannot keep from speaking about what we have seen and heard.”

We cannot keep from speaking about what we have seen and heard.

Sometimes we are afraid.

We fear confrontation and disagreement.

We fear we might offend people who disagree with us.

We fear we might be right—and are we ready to live in to the changes in store for us?

I see this playing out today on the issue of marriage equality. For a number of years, I’ve been advocating for equality. And not everyone here agrees I should be doing that.

But until recently, it has been a very theoretical conversation. We live in Idaho, after all, with both state laws and a constitutional amendment prohibiting same gender marriage. I couldn’t have legally married people in same gender marriage if I tried.

And we’re Presbyterians, a denomination that has ordination equality—men and women can be ordained regardless of sexual orientation. But we haven’t yet dealt with marriage equality. I expect something will make it to the floor of the General Assembly next month in Detroit, but at this point, our church polity has not kept up with civil law.

And then this week, a US Magistrate Judge announced Idaho’s Constitutional amendment was, in fact, unconstitutional.

Governor Otter, vowed to fight that decision all the way to the Supreme Court, so things are on hold for now.

But my theoretical views on marriage equality and the gospel became very real this week.

I believe scripture is clear that God is always working for inclusion, for welcome, for safety, for wholeness for all of God’s children. I also believe God created each one of us, with all of our differences, good and beautiful, just as we are.

I also believe marriage is sacred. No matter who is wanting to get married, it is important to me to have a relationship with the couple, to talk with them about what Christian marriage means to them.

So even as I support marriage equality, I was never planning on opening a gay-marriage-drive-through-chapel, where anyone could be instantly married by me, although I support my brothers and sisters who are planning to do exactly that.

It’s complicated. I’ve been emailing with the Session about this topic. And we’ll be talking about it further, because I recognize it is about more than just my own personal decision.

But I don’t want to be a jerk.

And we know people who boldly proclaim the gospel in a not very nice way. If you watched the Republican governor candidates and saw one of them using Scripture as a weapon, you have a sense of what I mean.

We’ve all experienced it.

People who are bold and confident in their understanding of the gospel and who confidently announce that we are going to hell—the reasons are varied. You should know there are people in town praying for your souls because you have a woman pastor. I’ve seen their letters and emails.

How do we boldly stand for the Good News in a way that people will still think it is Good News when we are finished?

Let’s think back to Peter. Peter started out with great enthusiasm. He abandoned everything to follow Jesus. He wanted to make bold claims to Jesus.

After the mountaintop transfiguration he wanted to stay there forever and build some tents!
When Jesus asks him how many times to forgive, he gives an extravagant number. 70 times 7!

Peter has enthusiasm from the beginning.

But on the night of Jesus’ arrest, he denied Jesus three times. He was not always bold.

Peter’s journey had many zigs and zags. John’s Gospel gives us a glimpse into Peter’s redemption after the resurrection. Even after his three denials, the resurrected Jesus goes to Peter and asks him, three times, “Peter, do you love me? Feed my sheep”.

And we wonder if that interaction was in Peter’s mind when he saw the lame beggar outside of the Temple. “Peter do you love me? Feed my sheep.”

The man was asking for a hand out. But Peter gave him much more than that. He welcomed him into abundant life as he’d been offered it from Jesus.

Peter, do you love me? Feed my sheep.

The love of the gospel is God’s voice in our head, asking us,  “Do you love me? Feed my sheep”.

And even in his conversation with the Temple authorities, he is feeding sheep. Yes, Peter is brutally honest with them. Yes, he is compelled to stand up for the gospel. But I think his words also leave room for the authorities to join in, because he’s acting in love for Christ’s sheep. And the temple authorities need salvation and redemption as much as the man Peter healed.

When you’ve experienced God’s love and forgiveness, when you take seriously Jesus’ command to feed the sheep, then you can speak with boldness about where you have seen God’s love.

And it is never about speaking a truth that is disconnected from love.

I don’t want to proclaim the truth of the gospel boldly, only to hurt people, especially people I love.

But I hear God’s voice in my head, “Marci, do you love me? Feed my sheep.” And I am compelled to stand with people facing injustice.

Friday, the day marriages were supposed to start taking place in Idaho, there was an event at the courthouse. What was supposed to be a day of celebration became another day marking the delay of justice for people who seek the benefits, privilege, and covenant of marriage. 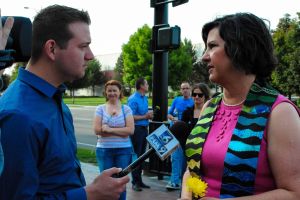 As I mentioned, I am still not clear about how I intend to navigate this new world of marriage equality in Idaho. But one thing was clear.  I heard Jesus saying, “Marci, do you love me? Feed my sheep”.

And I knew the place to be was at the courthouse, standing in solidarity with people seeking justice.  I wasn’t there because of my own merits. I was there because I know healing is possible because of the redemptive work of Jesus Christ.  Being at the marriage equality rally at the courthouse Friday felt like a small way to feed Christ’s sheep. It didn’t feel bold. It didn’t feel courageous.  It just felt right.

We’re all figuring this journey out as we go along. Some days we get it right. Other days, not so much. I’m thankful for this community, willing to love each other through it all.

As the body of Christ, we have each been given different gifts. Seeking to be bold for the gospel will look different for each of us. How are you called to boldly share the good news of Jesus Christ? How can we support and care for each other as we discern how we are to feed God’s sheep, even when we don’t agree about it?

My hope and prayer is that if we remember Christ’s command to feed his sheep, if we remember our call to love our neighbor as ourselves, then the Good News of God’s love will be proclaimed, even sometimes with boldness.