So, each year on Epiphany, the day the church celebrates the wisemen’s visit to Jesus, our congregation passes out stars that have words written on them. People are invited to pray through the word on their star and see what God has to say to them in the process.

I’ve written about it before. (At the top of the blog masthead, click on the link that says “STARward” to see the posts).

My word this year has been ADVENTURE. You can read my initial thoughts on the word here. And a mid year check in is here.

Despite my initial reticence about the word, it has grown on me, and it has settled in the cracks of my life, making me think it will stick around long after a new word has been chosen on Epiphany in January.

I’m not sure most people would look at me 12 months later and say, “my, she really has become more adventurous, hasn’t she?”

And it is true that I’m still not jumping out of airplanes or eating bugs or however the cool kids define “adventure” these days.

But I’m much more comfortable in my own skin than I used to be.

And while nobody wants to read too much personal transformation blah blah blah, let me just say it has occurred to me adventure requires a level of self awareness and security. In order to step out and try something new, you have to trust what you have to fall back on.

And at earlier stages in my life, I’m not sure I trusted myself enough to think I could tolerate voluntary failure, disaster, or embarrassment.

Sure, I experienced plenty of all of those things. But there is life that happens to you and you have to respond. And then there is you, voluntarily stepping out in risk.

I spend a fair amount of time not trying new things because of this fear of failure.

This goes way back in my life.

I’ve written about this before, but when I was 6 and my family was headed to Tijuana for the day, I refused to go because I was afraid to leave the country.  There’s no way I’d heard of Mexican jails as a first grader. What was I afraid of?

In 5th grade, I hid in shrubbery rather than talk to a boy on whom I had a huge crush.

I didn’t study abroad in college.

And what I’ve discovered about ADVENTURE this year is when the fear of failure keeps you from trying something new, adventure is almost impossible.

I’m sure this seems obvious to most normal human beings, but it has been a hard lesson for me to learn.

And I’m thankful for the lesson.

Because taking on the ADVENTURE word this year required me to trust in myself, and trust in the God who created and equipped me.

Actively seeking adventure required me to believe that any failures or embarrassments could be overcome, and that the risk of failure was not stronger than the possibility of new things .

It required me to believe there was a gift for me in the attempting of new things, and not just in the success of new things.

And as the year of adventure unfolded, I was able to step further and further away from my protective shell.

And I had so much fun.

the wonderful women with whom I get to dance

I wore odd costumes in public. 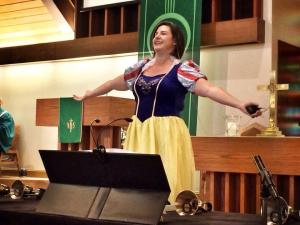 I take no blame for the halo in this picture.

And in other, less visible ways, I stepped out into adventure, and did more than survive. It freed me in so many ways.

When I first wrote about my word, I noted the connection to the word ADVENT. We’re thick in the season of Advent in the church right now, the season of preparation and waiting for the birth of the child who came to bring light and life to the world.

Our adult education class this past week had an Advent discussion about this painting by Tim Mooney.

Thanks to Tim Mooney for letting me share his art.
Theotokos 2005

It was a great conversation. As I sat in the back of the sanctuary and listened in, I was so thankful for the many observations people were willing to share. And noted how the painting was different for everyone.

Some noticed the man standing up with back pain, clearly unhappy to be in the state he was in.

Others noticed the woman with her hand on the seat. Was she protecting her privacy or inviting him to sit down?

Some noticed how the older woman seemed happy and at peace about her pregnancy.

I kept noticing the “are you ready for adventure” at the top of the painting.

Here are some definitions of Adventure I found.

1. an exciting or very unusual experience.
2. participation in exciting undertakings or enterprises: the spirit of adventure.
3. a bold, usually risky undertaking; hazardous action of uncertain outcome.
4. a commercial or financial speculation of any kind; venture.
5. Obsolete .
a. peril; danger; risk.
b. chance; fortune; luck.

And after a year of adventure, I am most attached to the origin from “a thing about to happen”.

My year of ADVENTURE has reminded me to look for gift in the unknown future.

And that seems a fitting reminder in the season of Advent.

As Christians, we proclaim there is a “thing about to happen” at Christmas. It is about both a child to be born but also about God still preparing to break in to the world in ways we’ve not yet experienced.

Are you ready for adventure?