A sermon preached for Southminster Presbyterian Church in Boise Idaho

Last week on Easter, we heard the original ending of Mark’s Gospel, where the women encountered a man in the tomb who told them not to be alarmed, for Jesus has been raised, he is not here.

And remember the womens’ response:

“They went out and fled from the tomb, for terror and amazement had seized them; and they said nothing to anyone, for they were afraid.”

And there Mark ended his gospel. In the Greek, it even ends with a preposition, causing Mark’s 8th grade grammar teacher to hang her head and weep!

Today, we heard the second ending to Mark’s gospel, the one that scholars are very confident Mark didn’t put there himself, but was added on by editors trying to help Mark out.

Normally, I ignore this longer ending to Mark’s gospel. Normally, I’m fine with the unfinished way he left his story.

But I confess, I wanted to edit Mark’s gospel myself this week, because we were finished with the Lentiest Lent we’d ever Lented,
and we had sung Hallelujah,
and we’d made it to Easter.

It feels just like it did before Easter. We’re still in our houses. We’re still on hold while we try to stay healthy and slow the spread of this virus. We’re still missing our communities and our extended families, and our restaurants.

It still feels like Lent to me, because we’re still in a season of giving up things that matter to us. I’ve had a hard time feeling Eastery at all.

The Narrative Lectionary, which we’d normally be hearing from, had Acts 1 as the assigned text. It is the passage where, at the end of 40 days after the resurrection, Jesus ascends to heaven. And I read it, and thought, “nope. nope. nope. I’m not ready for ascension right now. I need me some Jesus to come visit me while I’m locked away in my house”.

So I took preacher’s prerogative, and changed the text for today. For the first time in my life, I understand the desire by scripture editors to change the ending of the story. I see why the terror and amazement seemed like a bad place to stop the story.

This Eastertide, I appreciate the post resurrection visitation stories in new ways, and so we’ll be reading through them over the coming month. One of the things I realize is how much we have in common with the first disciples.

We generally think resurrection would have made things clearer for the disciples, easier to believe, even if maybe it doesn’t always seem that way for us.

But even in Mark’s second ending, when people are told by Mary Magdalene that she’s seen the risen Jesus, they don’t believe her.

The next encounter sounds similar to the Road to Emmaus story in Luke, which we’ll read next month. “After this Jesus appeared in another form to two of them, as they were walking into the country. And they went back and told the rest, but they did not believe them.”

And then Jesus has to show up his own self to the remaining eleven disciples. “Later he appeared to the eleven themselves as they were sitting at the table; and he upbraided them for their lack of faith and stubbornness, because they had not believed those who saw him after he had risen”.

It occurs to me that when Jesus shows up to the original disciples, it’s not the way Jesus wanted the story to go. What would have been the good second ending to this story is if Mary Magdalene and the two who saw Jesus on their journey had been believed when they told their stories.

For faith to take hold, people have to believe other people’s stories of resurrection. We can’t all be eyewitnesses.

I trust Jesus was going to pay a visit to the disciples in any case. But I’m pretty sure he wasn’t wanting to have to remind them to trust the voices of women and the voices of people who weren’t in their inner circle. He upbraided them!

I had to look that up in the Greek, because upbraid! We don’t down braid people. Or braid them. The word translated as upbraided is also translated as “rebuked” or “reviled” at other points in the New Testament.

“he upbraided them for their lack of faith and stubbornness” can be translated more closely as “He rebuked them for their unbelief and their hardness of heart”. Resurrected Jesus keeps it real with his friends.

I am somehow comforted by the truth that not even Jesus gets a picture perfect ending to the story.

Or maybe he does. Maybe Jesus doesn’t want to edit out the fact that the people he loves, that we, make mistakes and doubt and are skeptical. Maybe he’s fine letting his anger and upbraiding be visible to the world.

I wonder what the disciples thought about their rebuking. It is likely also not what they dreamed a resurrection appearance would be like.

Then again, maybe they didn’t care about the upbraiding that much because they were so relieved to see Jesus for themselves. Maybe they just needed Jesus, to meet them exactly as they were.

Maybe right now I don’t need a perfect resurrection appearance story either. I just need Jesus, to show up, point out my flaws, look askance at me for watching Tiger King while wearing my pajamas for the third week in a row, have dinner with me, and then commission me to share the Good News for all of creation.

The way Mark’s editors added to his ending is not the way I would have done it. I could do without the snake handling, at the least.

But ours is not.

We do get to write part of the story. It won’t make it into bibles as the third ending of Mark’s gospel. Like the disciples, we will go out into the world, out of our homes again, and continue our part in the story.

And my question for us is this. What kind of story do we want to tell when we are free again to leave our houses?

I hope we are seeing this time as a chance to consider the things that are important, and that we want to make sure is built in to whatever returns.

Can we tell a story of a society that is more gentle on the earth than the one we knew? If you haven’t seen the photos of America’s big cities without pollution, go look for them. As our busy-ness has stopped, with factories and cars not adding pollution to the skies, our earth has started to heal. This is not the time to relax environmental controls on industry. This is the time to protect what has returned. In this ending of Mark’s gospel, note that the Good News Jesus sends his disciples out with was for all of creation. How can we tell a new story of good news for all of God’s creation? 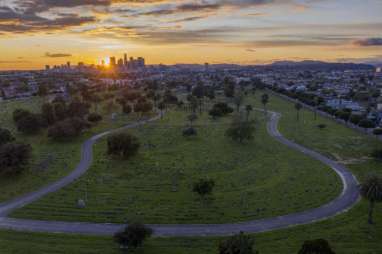 Can we tell a story of a society that has remembered that the way we spend our time and our money is an indication of our values? What I’ve missed these past six weeks isn’t being busy. I’ve missed seeing friends and family. I’ve enjoyed having dinner each night with Justin and Elliott, having time with them to just talk and to be. I’ve missed going to concerts and plays, and have been grateful for artists who have given us concerts and poetry from their homes.

What is the ending to this quarantine we want to write?

Mark’s ending to his gospel points to a beginning. The angel tells the women to go to Galilee, and there they will see Jesus, just as he told them. The ministry begins where the gospel ends. Even in the second ending, it tells the story of the beginning of the church, with the disciples going to the whole world to bring Good News to the whole of creation.

As we work toward the ending of quarantine, which may still be off a ways, I pray we will be as intent to work toward better beginnings too. What is the story we want to tell with the way we live our lives? Let’s write a good one.

One thought on “Second Endings”