Just last week, you heard the story of Jesus being baptized by John in the Jordan River. God’s voice spoke from heaven about how Jesus was God’s beloved son, in whom God was well pleased.

And in the very next verse, with which our passage began this morning, Jesus was led by the Spirit into the wilderness to be tempted by the devil. Jesus doesn’t even get a few minutes to bask in the experience of being called ‘beloved’ before God’s own Spirit sends him to the wilderness.

Temptation is not unrelated to God, it is a part of being beloved.  Being a part of the family of God, whether you’re God’s own son or an adopted family member as we are–- is no guarantee of an easy journey, or of worldly success or material gain.

When people say, “if only she prayed more….” or “if only he were more faithful, he wouldn’t have these troubles and difficulties”, they are operating under a false premise. To think that people who pray, people who are faithful, don’t undergo temptations and trials is in conflict with these texts. Temptation is a part of our life in faith.

The story of Jesus’ temptation is a story about who Jesus is as he navigates the voice of the tempter in his own life. If the tempter were to show up today, he couldn’t, realistically, tempt us to turn stones into bread, or tempt us to save ourselves after we jump off the tallest building in town, or tempt us to believe we could truly rule the world. This isn’t a passage to instruct us to avoid the temptation to perform miracles we couldn’t perform in the first place.

I wish those were the temptations I faced. If the devil came to me today and said “since you are a daughter of God, go run a marathon tomorrow!”, it would be easy for me to answer, “ ‘Again it is written, “Do not put the Lord your God to the test.” ’ I couldn’t run a marathon if my life depended on it. It’s an easy temptation to pass up.

The things that tempt me are often more subtle and pernicious. And I don’t only mean carbs.

Recently I was on preacher cruise, my annual study leave week with a group of clergy women. There were 63 of us from many traditions and from the US, Canada, and the UK.
It was a great week. I avoided none of the carbs. The class challenged and stretched my reading of the Old Testament. The women were wonderful and fun to be with.

There was also a situation that affected some women on the trip that made me consider temptation in different ways. Some of the women of color in our group faced an issue that we don’t have time to fully unpack here this morning. But it was about race and gender. And the response from the cruise line was bad. It revealed the way people often aren’t aware of their prejudice and bias, and revealed the power those unconscious biases have to harm people.

I was with some of those women one night when round 2 of the initial issue took place. We decided, as a group, to go to guest services to voice objection to the continued bad behavior of the particular staff member. And this is where my temptation hit.

“It isn’t really your issue”, I heard the voice say in my head. On one level, that’s true. I hadn’t been affected by the earlier incident of racist misogyny.

But that’s how systemic racism works. It tells white people, “this didn’t happen to you, so it isn’t really a problem.” 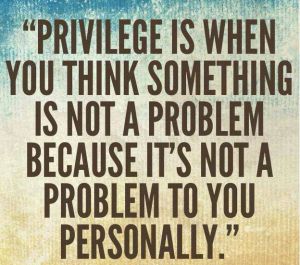 (If you don’t fully understand the difference between individual acts of racism and the broader systemic ways it works in our society, take a look at this article. )

I’m willing to stand up for and with people, but I was still raised and conditioned to not cause a scene. (I’m sure many of you don’t quite believe that about me, but it’s true). And here I was, at midnight on a cruise ship, in a scene where security was called on us. (And this article talks about the way niceness contributes to racism).

Earlier that night, one of our members had watched a man yell at a customer service person for over 15 minutes and security was never called. When some women of color started raising voices to be heard, security was called within 5 minutes. One of the staff people said he didn’t feel safe talking to us, even though no threats had been spoken.

I’m thankful that on that particular night, I managed to ignore that voice that told me not to worry about someone else’s problem because it was late and because I was tired.

Because systemic racism is my problem. And for too long I wasn’t aware that was the case.

I could also share about a million stories of the times I listened to the voice, but I confess to you I was not aware, in those previous moments, that it was a temptation that I gave into without a fight. For too long in my life, I was unaware of the privilege and power that come along with being white skinned in our country.

I was talking about it with my roommate, who was also there with me that night. And we recognized that the only reason we were even in the position to be able stand with our sisters is because we were with them when it happened.

We joked that the lesson for us is “always go dancing at the club when invited by the sisters”. But there’s truth in that. Too often, our lives are siloed and separated.

And we aren’t just separated along racial lines. But political divisions, socioeconomic and class divisions too. How can I be there with and for people if I am not in conversation and relationship with them? How will I even know what is happening in their lives if I don’t listen to what they say and observe what happens?

I also think about the temptation to ignore the effect that humans have on the climate of the earth. I continue to drive a gas powered car, and use electricity from coal fired power plants to heat, cool, and light my house. All while glaciers are disappearing and other effects of human caused climate change are endangering lives.

Maybe the biggest temptations are the ones we don’t even notice. The ones that tell us we’re just doing what everyone else is doing, and what’s the big deal after all.

The temptations we face may be as complex as ignoring the health of our planet and as simple as ignoring the humanity of the person in front of us. And what is a temptation for one person holds no danger for the next person. Which means it is up to us to be aware. And to know who we are.

I’ve mentioned before that I’m trying to do more centering prayer, where I sit in silence for 20 minutes each day. I haven’t quite figured out how to make 20 minutes not seem like 43 hours, but I’m getting better at sitting through my fidgety-ness. And I’m discovering that on the days I sit in silence for 20 minutes, I’m more productive with the rest of my day, I’m more creative. Thoughts don’t get as jumbled. And I feel more in tune with who I really am.

This might be the scariest part of the story of Jesus in the wilderness for me. God didn’t send him out there for 20 minutes, which would be plenty long enough to be left with my thoughts, thank you very much. God sent Jesus to the wilderness for 40 days.

The more introverted and withdrawing among you might see that as paradise, to be called away from everything for such a season. But 40 days. That’s a long time. The human body can make it 3 to 4 days without water. And after three weeks without food or water, people die.

Jesus’ trip into the wilderness is more than a camping trip. He had to rely on more than his own ability to survive. Matthew says he fasted 40 days and 40 nights, which is longer than a human body can make it without food or water. Jesus trip to the wilderness required him to rely on God’s provision, because it was past the limits of what Jesus could control or take care of on his own.

And maybe that’s what Jesus needed to make it through his temptations. When God had kept him alive for 40 days, what is the temptation of a loaf of bread?

When you really know who you are, what is the temptation of public fame?

When you really know who you are, when God has called you beloved and kept you alive, what’s the temptation to worship the devil?

One of my favorite poets died this past week. I’ve shared poems by Mary Oliver with you before. She overcame a difficult childhood of abuse and neglect by finding solace in words and in nature.

In her poems she reminds us to look for wonder and beauty, and to remain true to who you really are, no matter the temptations.
Here’s her poem The Journey:
One day you finally knew
what you had to do, and began,
though the voices around you
kept shouting
their bad advice —

though the whole house
began to tremble
and you felt the old tug
at your ankles.

“Mend my life!”
each voice cried.
But you didn’t stop.
You knew what you had to do,
though the wind pried
with its stiff fingers
at the very foundations,
though their melancholy
was terrible.

It was already late
enough, and a wild night,
and the road full of fallen
branches and stones.

But little by little,
as you left their voices behind,
the stars began to burn
through the sheets of clouds,
and there was a new voice
which you slowly
recognized as your own,
that kept you company
as you strode deeper and deeper
into the world,
determined to do
the only thing you could do —
determined to save
the only life that you could save.

I wonder if temptation stories are reminders for us to live our lives with great confidence and passion about who we are, who we have been called to be, and how we can make a difference in the world, even as the world is tugging at our ankles.
I don’t recommend 40 days and nights of fasting in a row for us. I do invite you to spend enough time each day, though, in prayer, in service to others, and on the lookout for wonder, so that when the temptations arise, we may recognize them for what they are, and we may remain true to the journey God is calling us to take.