I recently dressed like Wonder Woman at our church’s Trunk or Treat event. It was great fun. I’ve been planning the costume since I saw the film in the theater. Hours before the event, however, this conversation took place in my mind.

Voice: You shouldn’t wear that costume. You were going to lose weight over the summer, remember?

Me: Yeah, I remember. Somehow that plan got waylaid, but I really enjoyed my summer and learned about sticky toffee pudding.

Me: …….. (long pause) …….. Shut up. I’ve wanted to be Wonder Woman since I first saw Lynda Carter twirl into her costume. Gal Gadot just confirmed my love.

(The Voice then offered some very rude comments, something to the effect that I look like I swallowed Lynda Carter, and maybe Gal Gadot too.)

Me: Fuck you. Shut up. I’m going to be Wonder Woman.

And I was Wonder Woman. And it was awesome.

I’m not relaying this conversation with you because I need you to tell me anything about how I looked (really, I don’t need that). Thank you, though, to those of you who said nice things when I shared photos on Facebook.

I’m relaying this conversation because I suspect most women have some version of this conversation in their heads. More often than we’d like. And too often, that voice in our head gives us really bad advice. And we miss out on chances to be Wonder Woman.

I thought about being Wonder Woman for Halloween about 10 years ago and I didn’t do it because I was worried I was too overweight to wear such a costume. Much of my life I have avoided wearing the swimsuit, or the costume, or the things that might draw any attention to my body. 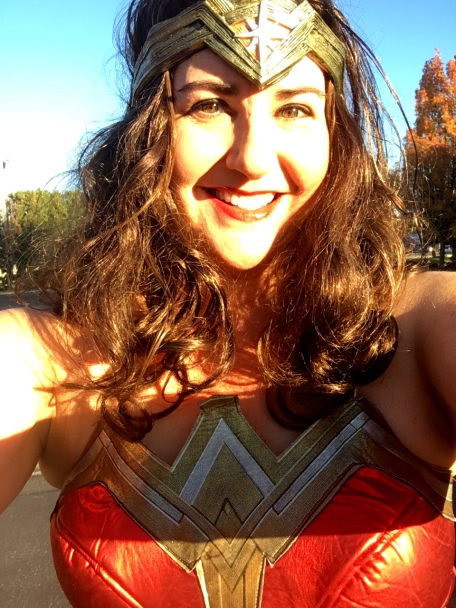 After the fun I had Saturday night dressed as Wonder Woman, I’m fighting an impulse to feel regret–for the opportunities lost to have that kind of fun in the past. Generally, regret is not where I want to put a lot of my energy.

And so I decided to share my story with you in case it might save you regret at some point in the future.

The Voice is fickle.

The Voice is fed by the images we see on screen, in print, and everywhere in our culture, reflecting back to us a standard of beauty that is often disconnected from our lived experience.

The voice can also function protectively, reminding us of experiences women have had when we’ve been too revealing, too sexy, too whatever. The Voice knows how our “too much–ness” has made us even more vulnerable to the judgment and violence of men, and then made us culpable for the violence we experience.

In a world of too much “me too”, we do have to discern whether it’s a time to listen to the Voice. Or whether it’s time to wear the costume.

This weekend, it was time to wear the costume.

Not everyone wants to be Wonder Woman (don’t ask me how that’s possible), but I hope you’ll wear whatever costume or do whatever it is that your Voice tries to keep you from. Don’t miss out on the fun. Wear the costume.

9 thoughts on “Wear the Costume”