President Trump signed an executive order on Jan. 27 that bars Syrian refugees from entering the U.S. indefinitely and bars all other refugees for 120 days, and keeps out visitors for 90 days from seven predominantly Muslim countries: Iraq, Syria, Iran, Sudan, Libya, Somalia and Yemen. Initially, as ABC News reported, administration officials said the ban also applied to U.S. green card holders reentering the United States from those seven countries, though they could get a waiver to reenter. But two days after Trump signed the executive order, administration officials said green card holders, who are permanent residents, would be admitted on a case-by-case basis after additional security screening.

The issue, apparently, is keeping the USA safe from terror.

Is there a risk in welcoming people to the US? Yes, because people are people. We harm each other. We are not always kind. We have differing levels of mental health and stability. We have complicated family relationships and different understandings of how to live together.

Would there possibly be a country from which we could welcome people with a guarantee that they would never harm us? No. We humans are a risky business.

The risk is there. And it is worth attending to how other countries have acculturated and welcomed refugees because it is not easy when any two cultures come together. Change is required by both sides and we should pay attention to that.

The issue is the nature of the risk.

Statistics show us that our fears about where we think danger lies are notoriously unhelpful. In 2006, when I went to the Middle East for 3 weeks, it is safe to say that some people in my family had some anxiety about my safety as I traveled in Syria, Jordan, Egypt, Israel, Palestine, Lebanon, and Greece.

Could I have died in a terror incident? Sure. But I was 50 times more likely to die in a car accident while living my regular life at home.

Here’s a chart from Huffington Post this past fall with some statistics for comparison. Note–these numbers do not include the 50 people killed in the Pulse Nightclub shooting in Orlando, so if you averaged those into the 10 year numbers, they go up a little.

Even with adjusted numbers, we have a far greater chance of dying by being hit by a bus or falling out of bed, than we do of dying by terror from a refugee from one of the countries listed on the ban.

And, while I know this will get some people in a froth, we have a SERIOUSLY higher chance of being shot by another American (adult or toddler). Gun violence will never go away completely. But the fact that some risk of it will remain is a horrible reason for us to do nothing. And nothing is all we have done in years, even though any steps we would take would make America demonstrably safer than this ban on refugees could ever do. (For more statistics on gun violence, see here).

Statistics reveal that fear is not rational. If it were, Trump would be attending to gun violence and those dangerous beds we keep falling out of.

Which means that the response to our fear needs to be education and not walls (either literal walls across our Southern border or figurative walls at Customs desks at the airport).

Plenty of people are in favor of Trump’s ban on refugees, and I hear their fear in their support. Fear of the “other”. Fear of people speaking other languages and bringing different cultures to our shore.  When we encounter the fear that would lead us to forget our American values of being a nation of immigrants, we need to listen to each other, and help each other place our fears in context.

You know who else knows fear? Refugees. People don’t become refugees by choice. When your village is bombed, you flee. When ISIS invades your area, you flee. When famine or war make living in your home unsafe, you flee.

If you don’t know any refugees, make some effort to meet some and hear their stories.

When we turn people away who are in need of safety and a second chance, we communicate fear and scarcity, and we  that America is not a great, vibrant country that can adapt to the needs of a hurting world. When fear makes our decisions, we forget our hopes and ideals. 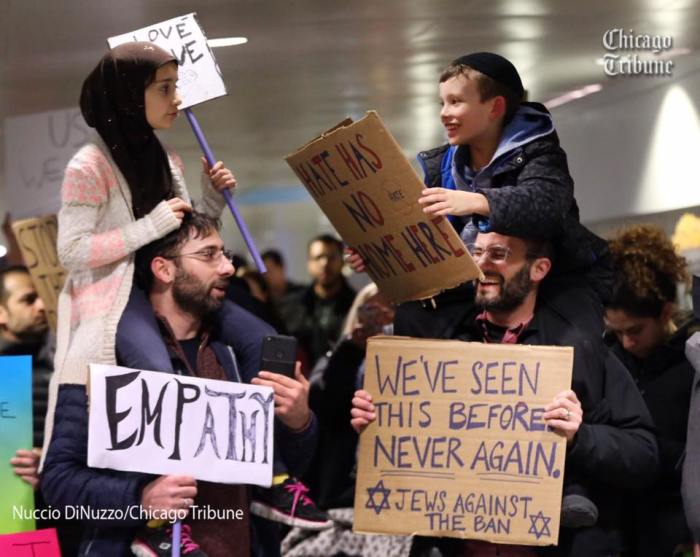 When we turn people away who are in need of safety and a second chance,  we breed mistrust. I don’t know any ISIS recruiters, but I’m willing to bet they are great fans of Trump’s new plan.

Are there risks to welcoming refugees? Yes. I’m honestly more worried about the risks to us, and to our humanity, that comes by turning them away.

Because the world is dangerous is no reason to stop being kind. Fear need not define us.