Here’s a longer version of an upcoming newsletter article I’ve written for the congregation I serve.

Last week, a gunman opened fire in a nightclub full of members of Orlando’s gay community. As I write this, 49 people are dead, with many more in the hospital. It is the deadliest mass shooting in American history. So far.

There are so many issues at play in a tragedy like this– access to assault rifles, the American born killer’s supposed allegiance to the Islamic State. Homophobia. etc, etc. After the Sandy Hook Massacre at an elementary school, we said mass shootings (where 4 or more people are shot) will  “never again” happen. Well, never again has happened 1,002 times in the US since that time. We can no longer allow the complexity of the problem to keep us from seeking a solution.

People of faith have a particular responsibility after the Orlando shooting. While the gunman was not a Christian, his hatred for people who are gay, lesbian, and transgender was fed by the culture of homophobia that is often fueled by Christian rhetoric that privileges a few verses of scripture, removed from their original context. And in the days after the massacre, more than one “Christian” preacher celebrated the attack and said they wished more people had died. More than one “Christian” quoted scripture to justify the violence committed against these young people. More than one “Christian” elected to congress quoted scripture to justify not protecting the lives of the LGBTQ community.

Those of us who are not a part of the LGBTQ community may not understand how important gay clubs are to that community, serving as sanctuary, safe place, and family for people who have often been excluded from sanctuaries, safe places, and family because of their sexual orientation and gender identity. I use the word “sanctuary” intentionally. I think of how grateful I am for the community, support, and love I experience in the sanctuary of Southminster. I can hardly imagine the pain and fear I would feel if a church sanctuary became the site of a similar massacre.

In the wake of the Orlando massacre, we who claim to be followers of Christ must be louder and clearer in our repudiation of hatred that is spread in the name of religion. Life is too short to let the voice of hatred go unchallenged. We must challenge their hatred when it is offered in the name of the God of Love.

We recognize we live in a world with multiple viewpoints, multiple interpretations of scripture, and multiple ways of living out faith. We support diversity in religious practice. Yet, as we have been silent in the name of tolerance, people have been killed. We can no longer tolerate the intolerance that fuels hatred and leads to the death of innocent people.

People are being killed every day for being gay, lesbian, transgender. It happened in Orlando on a big scale. It happened in Nampa at Lake Lowell recently when Steven Nelson was beaten, robbed, and left for dead because he was gay.

Southminster is already a fairly safe place, another sanctuary in the community for people in the LGBTQ community, and I am grateful for the ways you witness to the powerful Love of God by being a place of welcome.

As long as our friends in the LGBTQ community remain at risk, our work is not done.

The Board of the RevGalBlogPals, a group of clergy women with whom I do study leave every winter, released a statement after Orlando. I think this paragraph characterizes my feelings well.

“We renounce, saying no in the strongest way possible, the forces that oppose God, which lead to the Orlando massacre: homophobia, transphobia, misogyny, self-hatred, heresy, idolatry of weapons and weaponization, racism, and blindness to human and creation connectedness. We firmly reject any of these having any place in the world. Additionally, we are committed to all of these having no home, no toehold, no shadow, no sanctuary in any institution that considers itself to be church in the name of love.”

So we speak out, and we acknowledge the limitations to our support and understanding. To be good allies, we can’t pretend there are not differences in our experience. I will never know the fear of being gay, lesbian, or trans in our culture, even if I know fear in other contexts. I found this tweet about being an ally helpful.

To be a good ally, call your friends who are gay, lesbian and trans and let them know you love them. Ask them how you can support them.

If you’ve never been afraid of being fired because of our sexual orientation, or if you don’t know what it is like to be afraid to show affection to your loved ones in public, then you can use your voice to advocate with your elected officials on behalf of your friends who face those fears every single day in our society.

William Sloan Coffin wrote a benediction I occasionally use. He prays God will give us:

If you’re in town this weekend, please join us at the PRIDE festival. At a time when the LGBTQ community is facing fear, let’s be present with them and offer them love and hope. 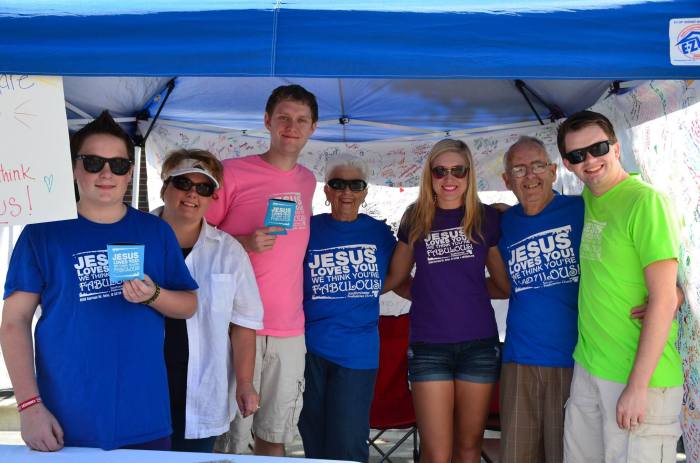 In these days, that is my prayer for us. Grateful to be on the journey with you.