All of the Star Wars movies start out with the line “A long time ago, in a galaxy far, far away….”

It is a “once upon a time” signal, a phrase that tells us we are entering a mythical tale, a story that will explore essential human experiences. Almost every culture and language tells these stories, and they all have their own way of signaling ‘once upon a time’.

In the Star Wars stories, before the first scene comes on screen, we know that the story doesn’t take place in Boise or Buffalo, but in a far off galaxy.

I’m (clearly) a fan of the Star Wars movies, but I also can acknowledge some of the acting is….not the best, and there may be a few plot holes big enough for the Millenium Falcon to fly through.  I love the films not because they are perfect, but because they tell a big mythic story, where characters have to choose to do the right thing, when doing the wrong thing seems to be easier.

Darth Vader, and later his grandson Kylo Ren, aren’t inherently evil people. They have set aside their humanity for a system of power.  Vader tells Luke to join him “If you only knew the power of the dark side”, and then later when Kylo Ren tries to get Rey to join him too,  and the struggle we see in both moments in Luke and Rey is because of their refusal to abandon their humanity for power.

We may never have visited the planets of Tatooine, Dagoba, or Naboo, but we recognize ourselves in the experiences of the characters, because we recognize the stories they live out. These characters struggle with good and evil, in the world, and in themselves. They seek hope when it is hard to see. They get by with a little help from their friends.

The Christmas story doesn’t actually begin with “in a Galilee far, far away….” although Galilee is indeed far away from where we are.

It begins with “In those days a decree went out from Emperor Augustus that all the world should be registered. 2This was the first registration and was taken while Quirinius was governor of Syria.”

Augustus sits on the throne in Rome and decides he wants to do a census, to make sure he knows exactly how many people are under his dominion and how many people he can tax.

Luke frames the birth of Jesus with a particularly political story that transcends its particularity to be recognizable to us.

Even though Augustus is not the name of our emperor, we see people on the news today who are also displaced and unvalued by the leaders of nations.

A long time ago in a Galilee far far away feels somehow familiar.

This is no time for a child to be born,
With the earth betrayed by war & hate
And a comet slashing the sky to warn
That time runs out & the sun burns late.

That was no time for a child to be born,
In a land in the crushing grip of Rome;
Honour & truth were trampled by scorn–
Yet here did the Saviour make his home.

When is the time for love to be born?
The inn is full on the planet earth,
And by a comet the sky is torn–
Yet Love still takes the risk of birth.

By taking the risk of birth, God shows us that divine love stands on the side of vulnerability and human connection. Jesus the adult had the power to heal and to work miracles. Jesus the infant needed protection, needed someone to feed him and diaper him, needed guidance as he learned to walk, to speak.

God could have shazammed divine power into an adult ruler on a throne somewhere, validating a particular earthly system of power.

God didn’t do that. God took the risk of birth, in the middle of a world unsettled by systems of power, and trusted that human goodness would protect the child as he grew.

I don’t know how many of you have seen the new Star Wars show the Mandalorian. Even if you haven’t seen the show, you may have heard of its breakout star, the Child, popularly known as Baby Yoda.

I started watching the show over Thanksgiving break with my nieces. And for the first part of the first episode, none of us were convinced we’d watch the second episode.

And then the Child arrived. Baby Yoda is the most adorable thing I’ve ever seen, and my own children were (are) very adorable. 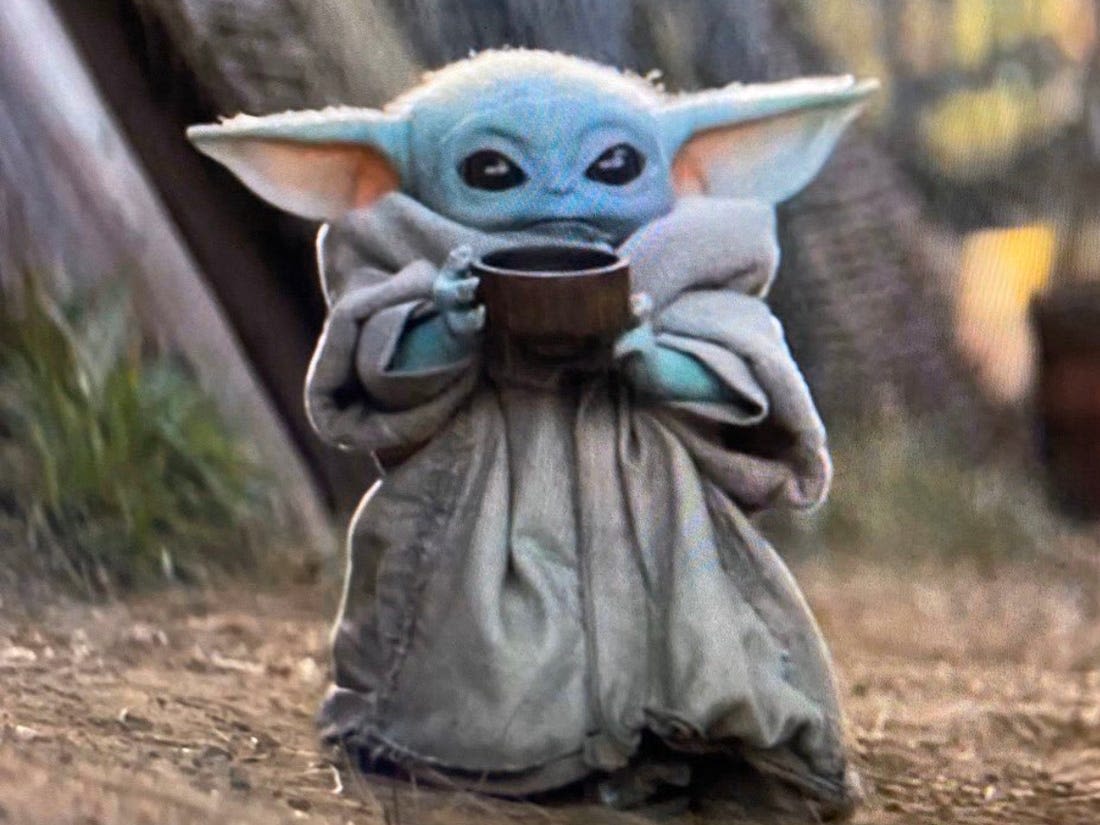 One of the actors in the series reported that when he first saw the puppet, he cried because it was so realistic. Baby Yoda made Werner Herzog cry.

As soon as Baby Yoda was on the screen, I was all in. I would watch any episode of TV with this character, even if, so far, the series seems to be the exploits of a man making questionable parenting choices.

Watching the Mandalorian character, who is a bounty hunter, protect this Child as he travels the galaxy got me thinking about what it is about children that turns the bounty hunter in all of us into fools who squish up our faces and make goo goo noises at babies.

Luke doesn’t report it, but you know the shepherds showed up after the angel told them about the good news of great joy, and they started cooing at baby Jesus. Who’s a good boy? You’re a good boy. Who’s got your toes?

We respond differently to babies than we do to adults. Bounty hunters like the Mandalorian have no problem capturing adults and turning them in for the bounty, but when he encountered the child, something else kicked in. He walked away from a job, put his reputation at risk, all to save the child.

Not all adults do protect children, of course. And when we see children taken from their parents, or children being trafficked, or children put in harm’s way, we are called to remember that some people and rulers forget their humanity in order to gain power. May we never forget ours.

When is the time for love to be born?
The inn is full on the planet earth,
And by a comet the sky is torn–
Yet Love still takes the risk of birth.

God sent a child, and risked birth. God sent a child, Jesus, so divine power could model for us how to inhabit human power.  By being vulnerable. By needing help and support from other people. By bringing out the goodness in others.

May we build a world where it isn’t as big a risk to be born.

A long time ago, in a Galilee far, far away God showed us how to love each other by risking birth and giving us a child. May we remember the power of vulnerable love, this night and always.

Merry Christmas to you and yours.

Here’s the video I shared during the Time with the Children: