There has been much brouhaha lately about a policy Vice President Pence and his wife have in their marriage. He has said he won’t be alone with a woman other than his wife and will not be in a place where alcohol is being served unless his wife is with him. This included, apparently, not eating with a woman in a restaurant if it were just the two of them.

Many people have jumped to his defense and pointed out that what one couple does in their marriage is nobody else’s business. While that seems like a good policy on the surface of things, we also know that when he was Governor of Indiana, Mr Pence felt that other people’s marriages were exactly his business and he passed legislation that interfered with LGBTQ people’s ability to marry, or have wedding cakes, etc. Religious “freedom” bills cause serious actual havoc and discrimination in actual lives of people who are denied access to services available to the rest of us. Any opinions I and others may have about his marriage policy will cause him no harm. If he really thinks that what happens in another couple’s marriage is not fair game for conversation, I trust he will change his mind about opposition to marriages that do not involve him. 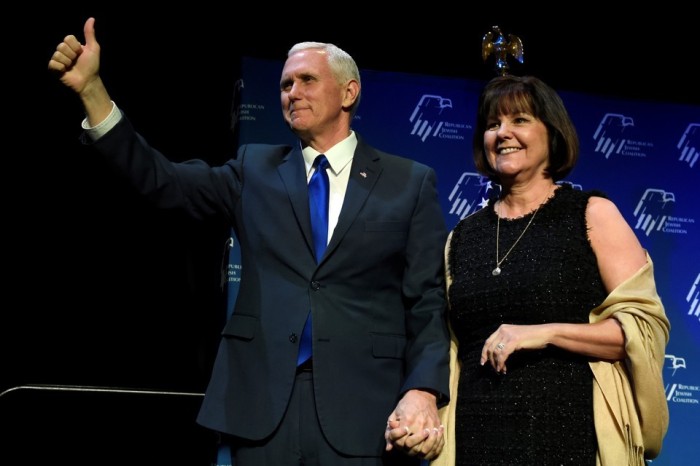 Other people have suggested that if he were to eat dinner in a restaurant with a woman who wasn’t his wife, people would accuse him of having an affair. Really? Is that the first thought we have? Or, we might just observe they are having dinner. Perhaps we might wonder if they were coming up with a solution to fix the Affordable Care Act? Or seeking a compromise for the Supreme Court nomination mess? Surely I am not the only woman in America who has successfully eaten a meal with a man without having an affair with him, right?

I do trust the Pences have all good intentions in their policy. It comes from a policy Billy Graham started back in the day. He was a charismatic evangelist in his prime. And we have seen how famous religious leaders, and politicians, have been brought to ruin because of misconduct in their marriages, so I understand efforts to be above the fray.

When I do pastoral counseling, I make sure someone else is in the building. I don’t share hotel rooms with my male friends. Any conversations I have with male friends are topics I have already discussed with my husband. In our world of text messaging and snapchat, what constitutes appropriate boundaries is certainly worthy of conversation.

Here’s why their marriage policy has me so twitchy. It perpetuates at least 3 lies about men and women. First, it suggests that men are not to be trusted, that they cannot remain faithful to their spouses unless they put up walls and rules to protect their fidelity.

Another lie it perpetuates is the idea that women are temptresses/sexual objects–that the only reason someone would have dinner with a woman is so he could sleep with her later. Heaven forbid that she might have something else to share with the world beyond being a sexual object.

A third lie is the idea that women have no agency, no ability to make up her own mind about having sex with her dinner companion. A dentist fired his assistant because he was attracted to her and she was a danger to his marriage. You can read about that story here. She didn’t want to have an affair with him. She rebuffed and ignored his inappropriate comments, and yet she was the one who lost her job. This lie is pervasive and sneaky in our culture.

You can also see that lie playing out in the debate to defund Planned Parenthood. Republican politicians, including Vice President Pence, want to remove federal health care dollars from Planned Parenthood. They claim it is because they are opposed to abortion. But federal money doesn’t pay for abortions, and abortions are a very small percentage of the healthcare provided by Planned Parenthood. So to take away money from PP is to say, “even though this doesn’t affect abortion funding at all, we want to punish you for having different a different viewpoint about this than we do. Until you make up your mind the way we tell you to believe, you can’t have money to pay for pap smears, birth control, or mammograms.”

This lie about women not having agency over their own bodies plays out in violence to women. Rape. Assault. “Jokes” by the President of the United States, who famously said:

I moved on her and I failed. I’ll admit it. I did try and fuck her. She was married. I moved on her like a bitch, but I couldn’t get there. And she was married. Then all of a sudden I see her, she’s now got the big phony tits and everything. She’s totally changed her look.

While conservative, religious VP Pence may seem the opposite of President Trump, in fact, they are opposite sides of the same lie about women. The only man from whom Pence needs to “protect” his wife is his running mate. Why would a man, led so strongly by his faith choose to align himself politically with a man who jokes about assaulting women? Perhaps because they both see women as theirs for the taking–it’s just that Pence is trying not to “take” them.

In addition to the lies it perpetuates about men and women and their ability to be in faithful marriages, it has terrible implications for women who would like to be employed. In any job. I could not do my job if I could not meet with my male colleagues, parishioners, or other people who come by the church to do business with us.

If Vice President Pence can’t be (won’t be?) alone with a woman other than his wife, how could he hire a woman to work alongside him?  If men in the halls of power, like Pence, exclude women from working with them in the halls of power, how can the gifts of women to lead, to advise, to set policy, to enact legislation be exercised?

I hope we will have a real conversation about appropriate boundaries and ways to live lives of faithfulness and fidelity.  As we do that, however, I hope we will expose these “modesty” rules for the misogynistic and limiting rules they are. Just because patriarchy is couched in religious language of faithfulness doesn’t make it better for women. Honestly, it doesn’t make it better for marriage, either.

Women are not yours for the taking.

6 thoughts on “Not Yours for the Taking”