Despite the title of this post, I promise it is not entirely political.

But I’ve been thinking about my body. Because I’ve been running again, by which I mean I have been very slowly jogging for short bursts before my oxygen runs out and I collapse in a pathetic heap. And I have a love/hate relationship with running, as many of you know.

The reason I run might best be summed up by what Lester says in this clip from American Beauty:

In any case, I used to run. I even ran a Half Marathon once, in what seems like another lifetime. But then I had injuries. And running hurt. So I stopped running, but I never really found a good replacement for it. Because I hate gyms. And I am a wee bit lazy. And I am a huge bit insecure and completely unwilling to wear spandex in a room full of beautiful bodied strangers.

But after too long of a break, I have been recently able to return to running. And I still struggle with it. I don’t like not being good at things, for one. I wish I could just snap my fingers and “voila! Marci is a runner!” But I can’t. It takes work. It takes routine. It takes time. It takes practice.  (You can see my thoughts on practice here.)

And it was all going pretty well until the cold and dark weather hit. And I had more than a few mornings when I chose to stay under the warm covers rather than go out and run. But I realized if I waited for good weather to run, it might be April. So I have been doing better at pushing myself out the door in the morning.

And this is what it looked like yesterday when I started my run in the dark and the fog. 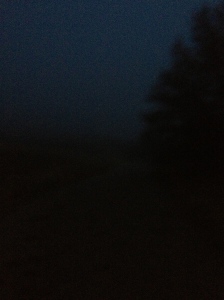 And I was all alone on the trails. Only the birds were up with me. It was disorienting to run the trails I know so well, without the aid of visual landmarks. It messed with  my understanding of distance. By the time I was halfway through my run, it was still foggy, but much lighter. 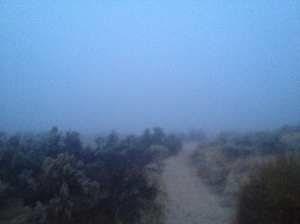 on the “moors” of Boise

One of the things I do love, unequivocally about running is the time alone with my thoughts. I can’t talk on the phone and run. Can’t check my email and run. Maybe some people can. But I would certainly hurt myself if I tried.

So I am left to just put one foot in front of the other.  Many of my better sermons have been written first in my head while running.

And when I was running on this “bleak midwinter” sort of morning, with no companions on the trails, with nothing but my thoughts, the sadly loud sounds of my lungs struggling for oxygen, and the rhythmic pounding of my feet on the trails, I thought about my body.

I thought about how thankful I am for this return to health that allows me to run again. Because I know there are many people who do not have the physical ability to do it.

I thought about how thankful I am to have the financial resources to afford good running shoes, and to have a job that allows me enough time to run in the morning. I know there are many people who are working hard just to make ends meet and for them, I suspect that the time to go run in the hills is a leisure they may feel they can’t afford.

But I thought about my body and how thankful I am that I have the ability to make choices for my body. If I get out of bed and run, it is my choice. If I don’t, it is also my choice.

There are a lot of things I can’t control. My left ankle, the sesamoiditis in my left foot, my knees are at the top of that list. But the choice to get out of bed and run, even in the foggy dark, is my choice.

And I can make that choice for good reasons or bad. I confess I run to look good naked, as Lester said in the clip above. But I also run because I want to be healthy. I want to model that for my kids, even though most days they model it for me. I run because I don’t want to end up with obesity, Type 2 Diabetes, and/or high blood pressure.

Choosing to run is one way of claiming that I am worth the time spent on my own health, which is exceedingly important, I think, for people in careers where caring for other peoples’ physical or spiritual health can take the front seat.

I thought about my body on this dark and foggy run because I realized I have “come to terms” with some truths about myself.

1. If I don’t exercise first thing in the morning, it won’t happen. Ever.

2. I will never be a marathon runner. And that is okay. The first of my running problems developed while training for that half marathon in 2006. Running this time around has taught me to just enjoy it. While it would be nice to be able to train for another race, it may or may not happen. And that is okay.

4. And I’ve learned that the best choices I make are the ones I make, not the ones other people try to make for me. My sweet wonderful husband is a super runner. He can run for 40 miles at a stretch. He will run at 3 in the morning if that is the only time he has that day. He once ran a marathon with a torn something or other in his leg. I admire everything about him. But I am not him. And I know that he (and others) have been trying for years, with all good intentions, to help me get in shape. 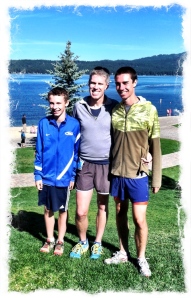 my running men. Elliott had just won his age group in the 5K. Justin had just run around Payette Lake. Alden had just won the Men’s 5K. (Any of them can run a 5K in the time it takes me to run a mile, and that’s okay.)

I don’t mean to imply that he has ever tried to make me go run or something. But what I’ve come to realize is that as much as he may be lovingly concerned about my cholesterol levels and general health, I can’t do it for him. I have to see and hear his concern in his love for me, and then I have to make it my choice, my decision.

And so I make that choice. I get out of bed and I go slowly jog through the foothills.

And this is where I might get a little political.

Because there are politicians out there who want to make choices for my body. And I’ll tell you right now that if I don’t want my husband, who I love more than anything, to make my choices, you can imagine what I think of politicians determining things for me.

Whether you agree with me or not, I encourage you to vote November 6. And I encourage you to pay attention to the platforms of the party of the candidate for whom you vote. Yes, I care about the economy. Yes, I care about foreign policy. And I agree with my candidate, broadly speaking, on those issues. But for me, in this election, women’s issues are the most important issue.

Thanks for still being here at the end of a long and somewhat rambling post. I invite you to consider your own body, give thanks for it, and then make the choices your own body tells you to make for your own best life. May we all continue to have that privilege and that freedom.