In the beginning when God created the heavens and the earth, the earth was a formless void and darkness covered the face of the deep, while a wind from God swept over the face of the waters.
Then God said, “Let there be light”; and there was light.
And God saw that the light was good; and God separated the light from the darkness.

Today is Trinity Sunday, the day that pastors try to explain our doctrine, or church teaching, of the Trinity—God the Father, God the Son, and God the Holy Spirit. This is a day that pastors across the country, if they are wise, take vacation.

Hear, O Israel: The LORD is God, the LORD is one.

This is Israel’s claim and has been for thousands of years. There is ONE God. Not the pantheon of gods and goddesses that other neighboring cultures worshipped. Just ONE.

We join with Israel and the other monotheistic world religion, Islam, in claiming that there is just ONE God.

But then we have the minor detail of Jesus Christ. The Son of God. For Jesus to claim to be one with God was scandalous to his Jewish neighbors. If there’s one God, there can’t be two. It was that simple.

But we are people who claim that Jesus was both human and divine. We believe that through the life, teachings, ministry, death, and resurrection of Jesus of Nazareth, we have a clearer picture of the Divine than we did before him.

Here’s how the Confession of 1967 describes it:

“The one sufficient revelation of God is Jesus Christ, the Word of God
incarnate, to whom the Holy Spirit bears unique and authoritative witness through the Holy Scriptures, which are received and obeyed as the word of God written.” (9.27)

And further complicating our understanding of God is the presence of the Holy Spirit. Our passage from Genesis this morning speaks of the spirit, the breath, the wind of God, moving across the face of the water at creation. So in the very beginning of the beginning, the Spirit is a way we know about who God is, what God does, and how God cares for us.

The prologue to John’s gospel is beautiful, if slightly mysterious, in English. It is even more beautiful in the original Greek, and reminds us of what we lose when poetic language is translated. We don’t, commonly, refer to a person as “the Word”. Yet, that is one of the ways we refer to Jesus.

There are lots of passages in scripture, like these, that suggested to the early church leaders the understanding that God is ONE and God is THREE.  But, sadly, Paul never wrote the Book of Trinity as a textbook on how to make it all clear and easy to understand.

And if my favorite apostle Paul didn’t feel a need to over analyze it, I’ll fight the urge too.

But we cannot, this side of Heaven, have a complete picture of God.

I would like us to consider one implication of being people who claim to follow a triune God. By claiming that God is Father, Son, and Holy Spirit, we claim that God exists, always, in community. From the beginning, God has chosen to exist as community, Father, Son, and Spirit.

It means that there is never a time when one person of the Trinity takes a vacation and leaves the other two in charge.

It means that there is never a time when one person of the Trinity starts thinking, “I think I could do just fine on my own—this community business is too much work.”

It means that there is never a time when one person of the Trinity puts the interests or concerns of self over the concerns and needs of the three.

We were not intended to be solitary beings, separated from others.

And I know this is somewhat at odds with American mythology. 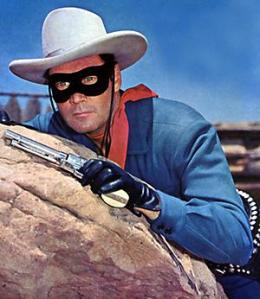 –Indiana Jones, who always thinks he can tackle his problems on his own

–Frank Sinatra singing “I did it my way”
Or think of these phrases:

–“pull yourself up by your own bootstraps”

–“look out for number one”

If you think I’m exaggerating about American individuality, let me give you an illustration. Different cultures see community and individuality different than we do.

If you and I hear news of a person doing something bad—Timothy McVeigh bombing the courthouse in Oklahoma City, Jeffrey Dahmer murdering people, or Ted Kascinski sending bombs through the mail—how is that connected to you, personally?
I hear those stories and think, “those people were disturbed individuals” but I don’t think it has much bearing on me personally.

But when I was in seminary, a student at Virginia Tech opened fire on campus and murdered 32 people. The shooter was a Korean American. There is a large population of Korean students at Columbia Theological Seminary and they sent out an apology letter to the seminary community. These students apologized for his actions just because he was also Korean.

I remember reading that email and being completely baffled.

Why, on earth, were they apologizing for the act of a man in another state, who they did not know?

Because he was from their community.

How would we live differently if we believed that the actions of individuals were connected to us?

What would it be like for us to apologize to people when someone in our community killed their child? The Robert Manwill trial is under way right now, but regardless of what the jury decides, this child did not have the protections he deserved. If we are Trinitarian, then it is clear that the community, that we, failed this child. Just as we have failed every other child killed in domestic violence.

We can’t just point our fingers somewhere else and say, “those horrible people did that to him.” Even though that maybe true.

We have to also say, “what are we doing to make sure this never happens again?”

How is our community supporting families? How are we supporting children? How are we advocating for children? When we baptize children, we make vows to care for them, to look out for them. And those vows extend beyond these walls. When one child dies, all of us suffer.

I recognize that taking claims of Trinitarian theology to this degree can be depressing because there is so much to do. There are so many people needing our help. Yes, that’s true.

But a Trinitarian understanding of how we order our lives and culture should give us hope. Because we are not alone.

If we model our living on the Trinitarian relationship of God, we’ll pay more attention to others. I just heard a story from a friend about a little girl who came home from school and told her mother that a little boy in her class never got what he wanted when he went through the lunch line. Kids could select chicken nuggets, or spaghetti, or whatever. But whenever this particular child went through the line, he always got a peanut butter sandwich, even if he asked for pizza.

So the mom looked into it and realized that the boy couldn’t pay for lunch and his parents hadn’t applied for free or reduced lunch, for whatever reason. So this family quietly paid for this boy to have lunch for the rest of the year. The daughter came home from school one day, not long after, and said, “mom! My friend got to pick his lunch today! He didn’t have to eat peanut butter!”

That little girl and her parents are living a trinitarian life.

When you volunteer at Grace Jordan, helping out in the classrooms, you live a Trinitarian life.

When you send money to Haiti, or Joplin, or Japan—to benefit people you don’t now—you are living a Trinitarian life.

When you go to the PRIDE Festival, as so many of you did yesterday, telling people who have been hurt by the church that God loves them, you live a Trinitarian life. 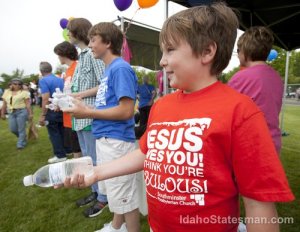 But then a twister went through the town in April, killing 24 and injuring many more.

So the Phil Campbells decided to turn their convention into a relief effort. This weekend, they have arrived from all over the globe to clean up, to rebuild, to raise money for a town they’ve never visited before.

That is Trinitarian living.

I also want to address the myth of non-trinitarian living. The Lone Ranger may have been called the Lone Ranger, but where would he have been without Tonto? Nowhere.

Superman may have had super powers, but if the Kent family wouldn’t have taken him in when his spaceship crashed on their farm, what would have happened to him?

And Indiana Jones always tried to go it alone, but even he had to be rescued at times. In one movie, he even needed his dad to help! 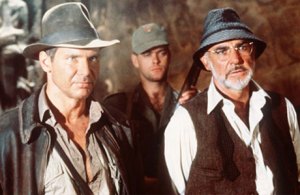 So, you will see people in our culture who are trying to tell us that we don’t need anyone else. You will hear comments about individuals and how we each need to take care of our own___________________ (fill in the blank). And I do agree that personal responsibility matters. But it isn’t everything.

None of us are where we are today only because of our own bootstrap pulling.

The myth of the individual is powerful, but it is a myth. “No one is an island, entire of itself”, as poet John Donne wrote. We are not a group of self-concerned individuals. We are connected, each to the other.

So each time you hear yourself or someone else start talking about the self-reliance of an individual, remember the Trinity. Remember that not even God chooses to go it alone. Thanks be to God.

3 thoughts on “Myth of the Individual”