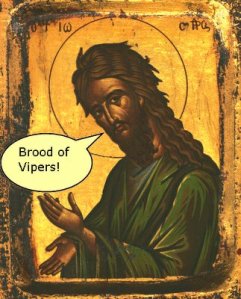 While the gospel writers all have different ways to tell the story of Jesus, they ALL begin the story of Jesus by telling us about John the Baptist. Each year we hear about John the Baptist in the Advent readings. It makes sense—Advent is about preparing the way for Christ’s birth and Christ’s eventual return and John is the one who calls us to get ready for that—but that doesn’t make it easy to accept. His message is impolite. It demands things of us. He is an equal opportunity prophet—he is as frustrated with those who do follow him as he is with those who don’t.

Before we can get to the sweet baby born in a manger, we have to deal with John.

Well, let’s see. What does the text say?
“You brood of vipers! Who warned you to flee from the wrath to come?”

How’s that for an evangelistic message?
“Welcome! We’re so glad you’re here, children of poisonous snakes!”

John, by calling them a brood of vipers, as opposed to a passel of vipers, or a crowd, or a bunch, or a gaggle, is claiming that they are the children, the offspring, of these vipers. And surely the snakes from whom they are descended didn’t lead them to repentance. John has not much nice to say about the religious leaders of his community.
So John asks them—who warned you to flee from the wrath to come? Who, he wants to know, called them to this repentance.

I imagine the crowd on the riverbanks started to reconsider following this guy. “Umm…you did, John. You’re the one who called us here. Remember? Voice crying out in the wilderness and all that?”
But what were they expecting when they came to the riverbanks? One event that would magically change their lives so that nothing bad would ever happen to them? An easy, “presto!” moment of salvation that doesn’t require any change in your life?

John is calling them to something much deeper. Sure, he can baptize large crowds, but if they are just going to go home and live as if everything is the same, except now they have magic salvation power, then it is just a waste of everyone’s time.

To the crowd’s credit, they seem to get it. At the end of this long lecture about vipers, axes leaning against trees, and everlasting fire, instead of fleeing back to the comfort of their homes, they ask him “what, then, should we do?”

His answers are specific to different people as well. If you are a tax collector, those people who made their living by collecting money from their own people to give to the occupying Roman leaders, they are told to only collect what has been assigned—no skimming off the top at the expense of your people.
If you are a soldier, you should be a soldier with integrity.

Interestingly, his instructions are fairly modest. He doesn’t tell the tax collectors to stop being agents of the Romans. He doesn’t tell the soldiers to become pacifists. Following God’s call, for John, means to be who you are, with integrity. Not everyone needs to quit their jobs and become Pharisees, preachers, or prophets. But you need to approach your work differently.

So, heeding John’s call to repentance means that your life should be “of a piece”. In other words, you shouldn’t come to church on Sunday to be a Christian, and then rob, cheat, or steal during the rest of the week.
Bummer, isn’t it?

For John, “repentance had …everything to do with how one handled riches, executed public service, and exercised stewardship.”(Jennifer Ayres, Feasting on the Word, Year C, Vol 1 , page 68.)

So, every year during Advent, we are confronted by John. We just want to jump to a comfortable Christmas morn, when all is well. But in order to get there, we have to look at our lives. How are we living as Christ’s followers as we prepare for Christ’s coming among us?

John wanted those who were coming to be baptized to understand the life altering implications of their actions. Living as people of repentance means we share what we have, look out for others, live with integrity, and by so doing, prepare a way in the wilderness, making a straight highway for our God.

Because God is coming to live among us. To become flesh, to be incarnate.
And we are to prepare for that divine mystery.

Our other reading this morning was from Zephaniah. We don’t hear much about him most of the year. He won’t show up in your year of the bible readings until the end of May. Not much is known about this prophet, other than what he writes about himself. It is likely from the mid 7th century BCE, located in the reign of King Josiah of Judah.

Zephaniah didn’t know he was talking about Jesus, but in the passage we heard this morning, he says, “the King of Israel, the Lord, is in your midst; you shall fear disaster no more. The Lord your God, is in your midst, a warrior who gives victory.”

God is coming to our midst.
And not just to say howdy.

This time that commenced at the birth of Jesus is still playing out. God will come back to remove disaster, to deal with our oppressors, to save the lame, and gather the outcast.

Advent is calling us toward that time as well.

Christmas is getting closer. The kids have one more week of school. The Christmas specials are airing 24/7 on TV.

But we are reminded by John the Baptist that there is work yet to be done.
People need to be treated with integrity and fairness.

Cold people need coats and shelter. Children at Grace Jordan Elementary need hats and gloves and are so thankful for your generosity in providing them.

Hungry people need food. And so we feed them, bringing in food for the pantry and for the Thanksgiving and Christmas dinners the Mission Committee sponsors for various agencies in town.