I am fortunate. While not all of my dates in my youth were great, all of my dates were safe, consensual, and respectful. When I told boys to stop, they did. Even if a few of them spent time trying to convince me to change my mind, I was a really good debater and none of their skillz matched mine. None of the boys I kissed put their hands over my mouth to cover my screams or had a friend lock the door so nobody would disturb us. Allegedly.

I know so many women from my generation who had close escapes, or were raped. By strangers. By dates. By boyfriends.

Many of the stories I didn’t know at the time. Only recently have women had the cultural ‘cover’ and safety to speak their truth. There are ways the “me too” movement have been problematic, but I will forever be grateful for the way it has allowed people to share their stories, and to have their stories be believed.

We have a candidate for the US Supreme Court right now who has been credibly accused of assaulting a 15 year old girl when he 17 years old.

I have heard lots of comments about why her complaint is only “about politics” and why it shouldn’t be worthy of an investigation.

“It happened so long ago”.

“Why didn’t she come forward then?”

“It was a different time. Our understandings of relationships have changed“.

All of those comments make me want to scream.

It was a different time, sure. But if rape or sexual assault were “okay” for men (or teenaged boys) back then, why did he need to cover her mouth so nobody would hear her screams?

It was absolutely not that “different” of a time. Rape and assault are not behavior that decent men need cover for, excuses for, and a pass. My sons are all adults now, but they were not raised to believe that because, or while, they were boys they could treat women with violent disrespect as Judge Kavanaugh has been accused of doing.

If Judge Kavanaugh did not do what Dr. Ford has reported, we should have a full investigation into the matter to clear his name. (For those who worry that will take too much time, the FBI investigated Anita Hill’s claims in 1991 and it took 3 days).

We must resist and reject those comments people are making right now to defend a man who has been accused of sexual assault. Because each of those comments demeans and diminishes the woman who was his victim.

But, Marci, why did she wait so long to come forward?

Dr Ford has had to go into hiding because of death threats she’s received. Still wondering why she (or any woman) waits so long to speak of her story? Primarily male victims of clergy sexual abuse come forward after a similar length of years and people don’t ask the same question about why did they wait so long. We must stop questioning women when they decide to remain silent. I promise, if they don’t feel it is safe, they won’t speak. And if they do speak, in the face of the danger, why are we not listening?

Why won’t she just speak to the Senate Judiciary committee who want to hear her story?

Here’s what Senate Judiciary members have said about the situation:

“This woman, whoever she is, is mixed up.” He also said that even if the assault accusation were true, the past wouldn’t matter so much: “It would be hard for senators not to consider who he is today.”

Senator Bob Corker expressed sympathy for Kavanaugh, but none for Ford:

“I mean, I can’t imagine the horror of being accused of something like this.”

“It would be a disservice to Dr. Ford, Judge Kavanaugh, this committee and the American people to delay this hearing any further.” 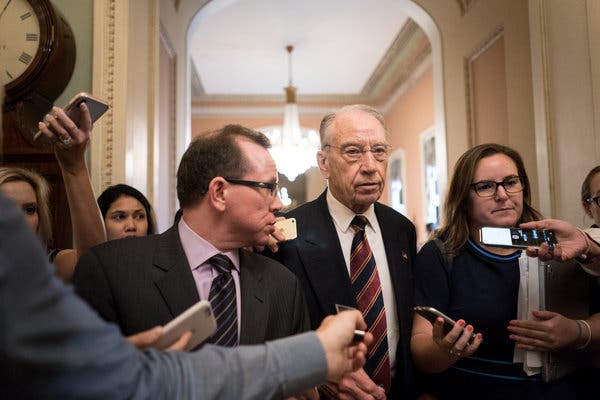 Do those comments suggest she would get a fair hearing before the committee?

Are you still wondering why women wait so long to come forward with their stories of abuse, assault, and rape?

“The Risk of Accusing the Powerful” This is exactly what it feels like! It’s death-defying. I know because I’ve experienced it many times when I’ve questioned or challenged a spiritual leader. Once I just allowed a woman to share her story on my blog, didn’t silence her, and that was enough to get me in serious trouble. This famous powerful progressive Christian dude rallied all his famous powerful progressive Christian dudes and made my life a living hell. I’m still feeling the very real ramifications of not silencing a woman. This is what perpetrators do. They have power. That means they’re well connected. That means their connections can be called to duty at any time to not only defend them but totally destroy their accusers. It happens all the time. You want to know what else is really sad? Yes, there are the perpetrators and their alliances that try to intimidate the victim further into silence. But there are all the other people who could have defended you but felt they couldn’t because they knew they would put their own lives at risk. Understandably so. I wouldn’t wish the torture that woman went through, I went through, and we all continue to go through, on anybody. The system is adversarial from the start. Small fish up against a frenzy of sharks. No wonder so many victims do not share their stories. They know the cost. This is why we shouldn’t silence women or other victims and survivors. This is why we admire them so much when they do speak up and share their story. #cartoon #comic #sharks #fish #abuse #assault #report #metoo

Before you make, or abide the hearing of, any more comments that explain away a terrible act, think.

Start believing women. Start giving girls safe places to tell their stories. Stop excusing violence against women. Create a world where they don’t have to wait so long to come forward and speak their truth.

Demand an investigation into Kavanaugh. We deserve better representatives on the US Supreme Court.

9 thoughts on “Waiting to Come Forward”