I am up early this morning, waiting to hear for news from the Supreme Court on marriage equality. But as I wait, I am thinking about a conversation earlier this week at the Idaho State Capitol, when there was a presentation to a senate and house committee on why we should include sexual orientation and gender identity to the Idaho Human Rights Codes.

There were some questions asked by conservative lawmakers (whom I suspect would not want to vote in favor of this) that seemed they were trying to find any loophole to help them in their opposition to this legislation. One asked the Boise Police Chief (who is my new civic leader crush, btw, after his wonderful testimony) something to the effect of “since you said there haven’t been any reported cases of violence since Boise enacted non-discrimination language, does that mean there really isn’t a problem and we can just move on?” (As I said, not a direct quote.) The Police Chief replied with (also not a direct quote), “No. People are still afraid to report this kind of violence because there is no state wide protection.”

I encountered it this past summer at the Presbyterian Church (USA) General Assembly too. People who were unhappy about the recent move toward ordination equality in our denomination were afraid of what was going to happen if we approved same gender marriage too.

Equality is arriving quickly, no matter how slowly it is arriving to those who are facing discrimination. But the shift in our culture is gaining more steam with each court decision, with each referendum, with each vote, with each politician, football player,  and pastor coming out in favor of it. In my lifetime, we’ve gone from open discrimination to same gender marriage in a number of states and other countries. And while the shift to equality and justice has not happened in time for too many people, it will happen. 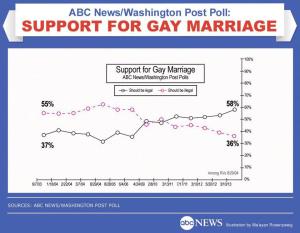 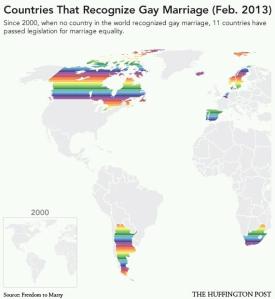 What has been dawning on me, ever since seeing the fear in my colleagues this summer at GA, is as we move forward with equality, how can we do so with grace?  And yes, I know that many opponents to equality have not been extending grace in their rhetoric.

How can we move forward with grace? 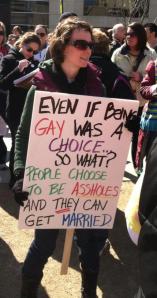 Take this protest sign, for instance. It is clever. But it also says people who are opposed to gay marriage are all assholes.

Or this image, which equates people who oppose gay marriage with racists. 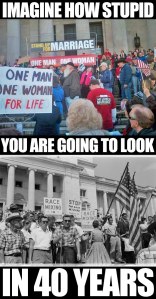 I’m not claiming either of those images are wrong. Are they helpful?

As we seek to move forward into this new world where equality is coming, how can we do so in a way that invites our opponents to join us? If we’ve called them racist assholes, they might be less interested in accepting these changes.

Because people who disagree with me on this issue are in the pews on Sunday morning as I preach. They are beloved people in my family. They are gifted colleagues and friends in ministry. I believe things need to change and we need to end discrimination. But I don’t want to demonize the people who see this issue differently.

As Walter Wink writes, “…the means we employ must be commensurate with the new order we desire.” (“The Powers that Be: Theology for a New Millenium p 113). So, are our means matching our desires?

I don’t have the answer to my own question. I’m hoping you will comment and continue the discussion. I wonder both about the process and strategy we use moving forward. And I wonder about how we will live together once the inequality is erased from the law.

Moving forward, I love the campaigns that show real people affected by the inequality in our laws and church practices.  Here is a video showing the first people to get marriage licenses in Washington State after it became law in December 2012.

I am thankful for my friends who share their stories without casting aspersions on anyone else’s stories. This story by my friend, Martha, is a good illustration.

I am sure I have made that argument many times. And it isn’t incorrect. But it leaves my brothers and sisters in Christ to be equated as racists and sexists if they don’t agree with me.

I have recently joined the Board of the Covenant Network of Presbyterians. I am thrilled to become more involved in this work. Covenant Network seeks to work toward a church “as generous and just as God’s grace”. Here is the statement Covenant Network filed in support of marriage equality. I appreciate the way Covenant Network is seeking to live into this future in ways that allow churches who support equality to live out that calling while giving space for those who don’t support it to continue their own calling.

So, what do you think? Can we support the rights of one minority without demonizing another group in the process?

13 thoughts on “Equality, with Grace”