A sermon preached at Southminster Presbyterian Church in Boise, Idaho on July 5, 2015

It is hard to go home again, isn’t it?

Jesus has already experienced this in Mark’s gospel. A few chapters ago, after people accused him of being possessed by the Devil…

“A crowd was sitting around him; and they said to him, ‘Your mother and your brothers and sisters are outside, asking for you.’ And he replied, ‘Who are my mother and my brothers?’ “

He’s already faced the tension of how a family system handles change. In most of our homes, that change looks less like denying who our parents are and more like figuring out how many household responsibilities a college student has when he comes home for the summer. All families face change.

And Jesus, too, is changing. He’s not the kid who played football in the street anymore.  He has left Nazareth, and everything Jesus had seen had given him a much bigger perspective on the world. He had encountered both people and cosmic forces who saw him in different ways than did Mr and Mrs Liebowitz from across the street.

“That Jesus. Such a nice boy. Always polite and helpful. Glad to hear he has done well for himself, reading scripture in the temple, even!”

You can hear those voices in the text. All of the praise for his reading, being astounded at his wisdom. Surprise that a hometown boy could make it big. 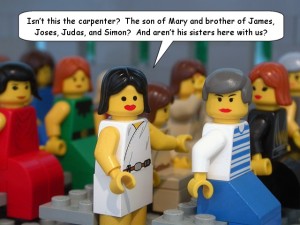 But we can see Jesus’ frustration, can’t we? He has seen the world, it’s problems, it’s temptations, and his neighbors are stuck wondering if Mary’s son could be doing these things?

Really? Ain’t nobody got time for that.

Mark doesn’t report what scripture Jesus read in the synagogue. He doesn’t tell us what Jesus said when he taught. But he reports that the hometown crowd took offense at Jesus. People often get offended when things change.

I think there are times when we ought to be offended too.

If we aren’t offended, perhaps we aren’t paying attention to how things have changed and to how we are being called in new ways. Jesus doesn’t just challenge other people. He comes home, walks right back into the place where all of you nice people taught him Sunday School and baked him treats for Vacation Bible School, and he starts telling us what we need to know.

I can imagine Southminster of Nazareth was proud to hear stories of when Jesus told those pharisees in Jerusalem about the errors of their ways. I suspect they were silently thrilled and proud when they heard of his teaching and healing on the shore of the Sea of Galilee. Because those people, you know, those other people who aren’t us, they need to be healed. They need to be taught.

And when he walked into their midst and started preaching a similar message to them—to HIS people—they took offense.

Are we offended by the Gospel too and by the change that Jesus brings to how we live in the world?

Are we willing to acknowledge that while Jesus is off healing other people who can’t quite get it figured out themselves—he’s also here to heal us?

Are we willing to acknowledge that while Jesus is off casting demons out of other poor souls who don’t have their lives all together, he’s also here to cast those demons out of our lives too?

Are we willing to acknowledge that while Jesus is preaching a difficult message to those other people in other churches, he’s also here to make sure we hear it too?

We don’t really know what happens to his home congregation after Jesus leaves and sends the disciples out to heal and teach.

I hope they snapped out of the offense and jumped into action. Considering they had always liked and trusted Jesus when he was a kid in his dad’s carpentry shop, then maybe they could trust him now and join in the work of proclaiming the Lord’s favor.

What we don’t want to be is the hometown where Jesus can’t do any deeds of power. We don’t hear much about Nazareth in the rest of the gospel. It is a place from where nothing good can supposedly come. It is the hometown of Jesus. It is not the site of many miracles.

Jesus goes to other villages and accomplishes all sort of things. Heals lepers, rebukes demons, heals the crowds, feeds 5,000, and preaches in the synagogue.

Maybe the problem with Nazareth was only that they got offended about the wrong things.

Instead of worrying about whether or not Jesus had offended them, what if they had chosen instead to be offended on behalf of the injustices in their world?

Instead of worrying about how things might change for them, what if they had chosen to worry about how they might help other people navigate the new world they were in, where Jesus came home and called them to new ways of understanding God and themselves?

The people in the other towns where Jesus healed were able to accept him as he was—as he had changed to become who God was calling him to be–a healer, a prophet, a good preacher in the synagogue. The people of Nazareth couldn’t seem to get over their notions of who Jesus was supposed to be. They couldn’t let go of who he had been—the boy running through the streets of the village, the kid who asked all the questions during the Time with the Children, the young man who made the most beautiful furniture, Joseph and Mary’s boy.

We have to pay attention to that too. Do we define Jesus by who we think he should be? Or do we welcome him into our midst as he is now, ushering in God’s new kingdom? Are we limited by who he used to be?

One of the reminders of the “it is hard to go home again” stories is that people change. We don’t always see the change in the midst of our day to day lives. But then we go back home, and we realize we aren’t exactly the same people we were before.

And even Jesus faced this.

And so we have to fight our tendency to pretend change doesn’t happen. By becoming flesh and living among us, God gave us new ways to understand God. God remains sovereign, but God, in Jesus, grows up, changes, lives a life of change.

Because we are people who serve a God who changed. From the child born in a manger to the man who died on a cross—we worship a God who is sovereign through all change. What have we to fear?

We will come to the table in a few minutes, to celebrate communion. Communion is another way God helped us see change. God changed the sacrificial system of the temple into a meal where we remember who we are and whose we are. From a meal shared among friends, Jesus showed us how much the Divine loves us and wants us to love each other.

So, as we come to the Table, know that God is with us in the midst of the change of the world. We just need eyes and hearts and minds open to see Jesus as he is, so we can join in the work of the kingdom.