John the Baptizer had said a lot of things in his life that were controversial. Mark doesn’t report much of his preaching, but we get more from Luke’s gospel, where John called God’s chosen people a “brood of vipers”. He called out religious leaders.

He called everyone to repentance and made clear that Jesus was changing the world:
“He will baptize you with the Holy Spirit and fire. His winnowing-fork is in his hand, to clear his threshing-floor and to gather the wheat into his granary; but the chaff he will burn with unquenchable fire.’” (Luke 3: 16-17)

I’m sure John considered the risks. When you say unpopular things, when you anger authorities and challenge religious and political assumptions, when you ask people to change, you face backlash.

John, like the prophets before and after him, was still compelled to preach the message God had given him to preach.

I think of what Martin Luther King, Jr said the night before he was assassinated in Memphis:
“Well, I don’t know what will happen to me now. We’ve got some difficult days ahead. But it doesn’t matter what happens to me now. Because I’ve been to the mountaintop. And I don’t mind. Like anybody, I would like to live a long life. Longevity has its place. But I’m not concerned about that now. I just want to do God’s will. And He’s allowed me to go up to the mountain. And I’ve looked over. And I’ve seen the promised land. I may not get there with you. But I want you to know tonight that we, as a people will get to the promised land. And I’m happy tonight. I’m not worried about anything. I’m not fearing any man. Mine eyes have seen the glory of the coming of the Lord.”

The prison were John had been held, interestingly, is on a hill on the east side of the Sea of Jordan. So he would have literally seen the Promised Land from his prison cell.

I trust and pray that John had a similar sense of peace that came along with the challenge of his prophetic call.

But I wonder if John ever thought his critique of Herodias and the dance of her daughter would be what got him killed?

Herodias was not just an angry woman, insulted by a prophet, although people like to portray her as just that. She married a man who was the son of Herod the Great and the grandson of the high priest. Political and religious dynasty family. Imagine a child of George Bush married a child of Billy Graham.

And she walked away from that marriage and married her husband’s half brother. Women get in trouble for doing that today. Just think about it happening 2,000 years ago.

And Herod Antipas, we’re told, is “pleased” by the dancing of his step daughter/niece, which makes me go “eww”.

Just in case you think this is only a made up story from long ago and nobody would do that, really….Donald Trump, when asked about his daughter, said, and I quote:
“I don’t think my daughter would pose for Playboy, although she does have a very nice figure. I’ve said if Ivanka weren’t my daughter, perhaps I’d be dating her.”

And Herodias’ response to her husband’s “pleasure” at her own daughter’s dancing is to use his nasty mind for her political gain.

The Herodian dynasty is a soap opera. And I’m sure people in Jerusalem loved the scandal in the same way people today care about keeping up with the Kardashians.

Their familial drama served as a distraction to bigger issues and systemic political problems. Herod Antipas held the Jewish people and traditions in contempt and “built his capital city, Tiberias, on an ancient burial ground, rendering the city ritually unclean to religiously observant Jews.”¹  I wonder how valued by their government did the Jewish people feel with that level of disregard?

This story reminds us that we get distracted by salacious details of private lives and miss the real scandal of bad public policy.

Notice this the next time CNN is fixated on Caitlin Jenner or the fake scandal de jour while the real news is ignored.

I am glad South Carolina decided to take down the Confederate Battle Flag from the capitol grounds this week. It had been raised 50 years ago in defiance of the civil rights movement and its time to be lowered was long past. The home grown terrorist who killed 9 people at the church in Charleston was photographed with that flag. It was clearly being used as a sign of hatred by him and its removal from the state is one appropriate response to the tragedy. 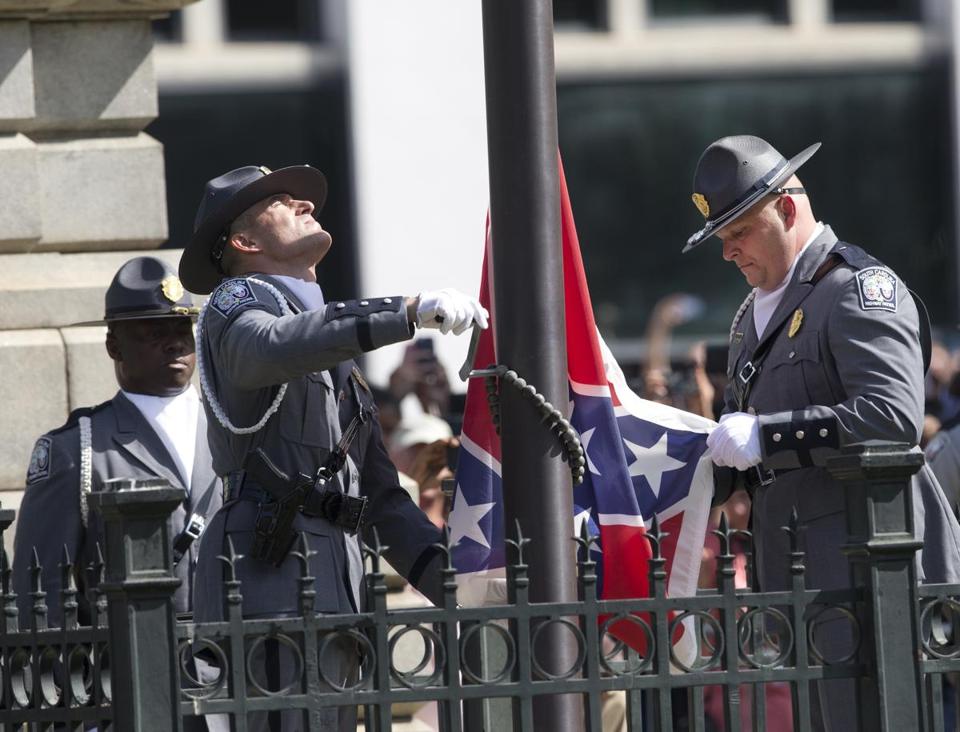 My fear, as has been voiced by many people, is that we will focus all of our attention on the scandal of the confederate flag and ignore the systemic scourge of racism that permeates our culture so deeply that many of us don’t even notice its presence.

I hope that we won’t look at this act of lowering the flag and decide “mission accomplished”. I pray this will be a beginning of work for some of us and that we will join in the continuation of struggle that some people have been living with their entire lives long. Let’s not get distracted.

Here’s what the historian Josephus wrote about Herod and John at the time:

“Herod had John put to death, though he was a good man and had exhorted the Jews to live righteous lives…..When others too joined the crowds about him, because they were aroused to the highest degree by his words, Herod became alarmed. Eloquence that had so great an effect on the people might lead to some form of sedition, for it looked as if they would be guided by John in everything that they did. Herod decided, therefore, that it would be much better to strike first and be rid of him before his work led to an uprising, than to wait for an upheaval, get involved in a difficult situation, and see his mistake”. ²

Mark’s purpose in telling the story is different than Josephus’ purpose, of course. Mark is not trying to give us a history lesson. He’s making an ideological point about who Jesus is, who John was, who Herod is— and Mark places this story right in the middle of a narrative, cutting another story in half to fit this one in.

Last week we heard of Jesus’ reception in his hometown and how he then sent the disciples out in pairs, with authority over unclean spirits, to heal and cast out demons. This story we heard this morning is followed by the return of the disciples and the report they give to Jesus about their success.

And Mark very intentionally inserts this Game of Herodians story right into the middle of it.

We’re told Herod had heard of Jesus, for Jesus’ name had become known. And the fears Herod had about John the Baptizer were perhaps even greater about this peasant who had been baptized by John and was now healing people and casting out demons—and even worse, was commissioning and equipping others to do it in his name.

Herod thought he’d metaphorically cut off the head of the snake when he literally cut John the Baptist’s head from his body. Now it seems it has grown back and multiplied. How was he going to put down this insurrection when it happened? It was no longer as simple as removing one person from the scene.

While the disciples and the followers of Jesus seem a little confused at times about who he is, Herod seems to see him quite clearly—Jesus is a threat to the stability of the powers that be.

And perhaps one of the reasons Mark dumps the story right here in the middle of the commissioning of the disciples is to remind us both that being disciples is dangerous work and that comparisons of Jesus and John the Baptist are to be highlighted, not dismissed.

Jesus is carrying out the work of John, and embodying his message, and equipping others to spread the message too. And with this interlude of palace intrigue and prophet murder, Mark reminds us that this Message is dangerous to the way things are. And when we obey Christ’s command to go out and heal people and proclaim his Good News, the leaders will notice. And they will not be amused.

Do we live as if the Gospel is dangerous?

I wonder if another reason Mark adds the Game of Herodians story here is to level a pointed political critique at the establishment. If you follow Jesus, you can’t also follow Herod.
—Jesus is bringing God’s kingdom to the world—release to the captives, justice to the oppressed, and hope for all.
—Herod is bringing a bankrupt kingdom where the lecherous promise of a drunk man to his step daughter can cost an innocent man his life.

Who are we going to follow? And are we willing to stand up to systems of oppression, and brush aside the shiny distractions of celebrity scandal to call attention to the real problems in our world? Or do we want to just tune in each night to be distracted away from the things that need our attention?

Rep. John Lewis, a leader of the Civil Rights movement and one of the people who was beaten as he crossed the Edmund Pettis Bridge in Selma, won’t let us get distracted or complacent. He showed up at Comic Con this week, a giant convention of people who dress up like their favorite super heroes and comic book characters. Rep. Lewis, however, wasn’t dressed like Superman. He was wearing what he wore the day he walked across that bridge in Selma.

“In America right now we’re just too silent,” Lewis said during a presentation for the second chapter of his autobiographical graphic novel March. “We need to make some noise.”

// Darla Wilson made the video I showed at the start of worship today (I will share on Facebook–I don’t have permission to make it work on the blog), one example of not being distracted by the side show but of focusing on the real loss that happened for 9 families in South Carolina. And at the beginning of the video was the voice of Rev Clementa Pinckney talking about being a disciple:

Whether we live it out or not, he said, the church is about freedom to fully be what God intends us to be. And sometimes you gotta make noise to do that.

Rev. Pinckney understood the story of John the Baptist. He knew how dangerous it was to preach of God’s love. And he did it anyway, and publicly. Because he knew that what the world needs now is not more scandal and distraction. It needs people who are willing to be messengers of God’s love, going out into the villages, two by two, sent by Jesus to do the work of the kingdom.

Friends. Are we done being distracted? Are we ready to be sent?

One thought on “Game of Herodians”