I’ve spent much of the week listening to testimony for and against House Bill 2, which would Add the Words “sexual orientation” and “gender identity” to the Idaho Human Rights Act. My testimony to the House State Affairs Committee is here.

There were some beautiful stories shared, particularly when parents of trans children spoke of their journeys of acceptance and understanding and asked for protection for their children.

There were some heartbreaking stories shared as well.

–stories of people who have been assaulted and injured

–stories of people who are afraid to use public restrooms, or afraid to talk to their co-workers for fear of revealing their sexuality at work and risking their jobs

190 people testified over the three days. Of those, 134 spoke in favor, 54 spoke against, and two were neutral.

I expected there would be people speaking against this bill. But I never expected the level of hatred, prejudice, and vitriol that was directed at Idaho’s gay and trans citizens. It was horrible. Truly frightening to me that people would go “on the record” before a legislative committee and say those things. I told the committee that the testimony against the bill was proof the bill was needed.

“I have deep love and compassion for all people, as Christ has taught me and by the incredible example of my parents growing up,” Laurie Burchfield said at a House State Affairs Committee hearing on House Bill 2. “With that said, that love and compassion does not mean I condone the LGBT lifestyle.”

She said the terms sexual orientation and gender identity were “undefined and open up a Pandora’s Box of sexual preferences.”

“Ladies and gentlemen, do you really want to legalize under this bill pedophilia, sadism, bestiality, necrophilia, exhibitionism, polygamy and many others?” Burchfield asked. “Those are all within this undefined term.”

She was not alone. Without a fault, every person who carried a Bible to the lectern went on to say hateful and dehumanizing things about Idaho’s gay and trans people. Some people said hateful things without the Bible in hand, but even most of them invoked it or quoted from it. 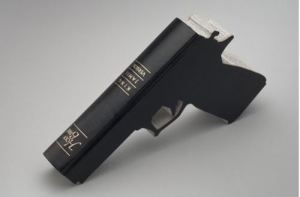 Thankfully, there were lots of religious leaders there to speak for the bill. And their testimony was good and powerful.

But. Still. I just can’t get over the visual of those men (the people with Bibles were all men–hatred came from both men and women) wielding the Bible as a weapon, spewing hatred and malice.

Thursday morning, the House State Affairs Committee will debate and vote on the House Bill 2. They have the power to send it out of committee to the floor of the House. Who knows what they will do, but my word for the year is “miracle”, so a girl can dream, right?

One possibility, if this bill makes it out of committee, would be for them to add some sort of religious exemption, which would allow people with “deeply held religious beliefs” to not be held accountable to the law.

Yes, conservative Christians who testified against this bill, I’m looking at you. You have taken the Good News of Jesus Christ and used it as a weapon of hate. People in our state need protection from you because you have chosen to privilege your fear of homosexuality over God’s call to love our neighbors as ourselves.

A religious exemption would be like passing a law prohibiting foxes from going into the hen house, but then telling the foxes you’ll leave the door open all night, wink, wink, nudge, nudge.

I saw this on Twitter tonight. It about sums it up.

You will never, ever be able to shout, shove, or shame anyone into holiness–but you CAN shout, shove, and shame them away from God.

We must do better. People are dying while “Christians” speak of love and then preach hatred. It is time to Add the Words, with no religious exemptions.

15 thoughts on “The Bible as a Weapon”