Donald and Lynn Knapp are licensed ministers in the International Church of the Foursquare Gospel. Which is great and all.

They also own a wedding business in City of Coeur D’Alene that illustrates how sacred marriage is by removing it from the church and putting it in a for-profit business called “The Hitching Post”.

They claim to have married “roughly 35,000 couples” which indicates how discerning they are in making sure the couples they marry are really ready to enter into this life long covenant. In the 25 years they’ve owned the Hitching Post, that’s around 1,400 weddings a year. When you’re officiating only 1,400 weddings a year, you have plenty of time to offer pre-marital counseling and have conversations with the couples who are entering into this sacred covenant of “biblical marriage”.

Because “biblical marriage” is what they believe in.

I’m guessing they are choosing to only believe in the relatively late biblical model of one man and one woman, as opposed to other biblical models of polygamy, or having children through slaves, or women becoming property of their husbands. King Solomon had 700 wives and 300 concubines, but the Hitching Post could not accommodate a crowd of that size.

Now that the State of Idaho is recognizing same gender marriage, and because the Knapps live in Coeur D’Alene, which has a non-discrimination ordinance on the books, the Knapps have filed for a Temporary Restraining Order, claiming that forcing them to make equal accommodations to all couples, regardless of sexual orientation, is unconstitutional.

Actually, that would be the facts of the case, which doesn’t seem to concern them much, because, well, Jesus. Their actual claim is the government is over-reaching and forcing ministers to violate their religious beliefs.

I hate to be the one to point this out to the Reverends Knapp, but they are not, in fact, pastors of a church. They own a wedding mill.

The government has not compelled, nor will it compel, ministers to officiate at any weddings. Clergy have great discretion about the marriages we participate in. I didn’t sign licenses for 3 years because of marriage inequality in Idaho. The government never once compelled me to sign a license.

I fully support the Knapps in their decision not to personally officiate at weddings that violate the sanctity of marriage. And clearly, by marrying only 35,000 couples, they have maintained a high scrutiny in their standards.

As business owners, however, they need to make accommodations equally for the couples who believe the faux Western façade of the Hitching Post is the venue where they want to celebrate their life long commitment. 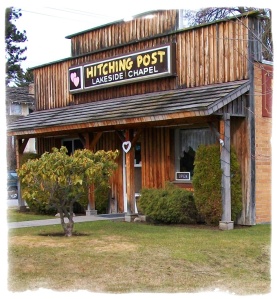 Adding a faux facade to a building really makes it look more Biblical Marriage-y. Am I right?

So here’s an idea. You could easily find a minister who would be happy to participate in same gender weddings. There are plenty of us.

Or here’s another idea. You could also let go of the self-righteous indignation and moral outrage.

Because if you really cared about “Biblical Marriage”, you would want couples to celebrate their covenants in the presence of their faith communities, before God, and with some solemnity, and not across the street from the courthouse in a one stop shop wedding mill.

28 thoughts on “Sanctity of the Wedding Mill”