A sermon preached at Southminster Presbyterian Church in Boise, Idaho May 10, 2015

That was the word that stuck with me all week from this short passage.

To remain. To continue. To stay. To dwell. To reside.

To put up with. To tolerate. To withstand. To wait for.

In ways both personal and cultural, I kept thinking about what it means to abide.

Because abiding requires being willing to play a long game, to stick around when you want to leave. Jesus ties it in with directions to love, as Deanna so eloquently spoke of last week in her sermon. ‘This is my commandment, that you love one another as I have loved you. No one has greater love than this, to lay down one’s life for one’s friends.’

I want love to be easy. I want abiding in love to be easy. And then Jesus talks about laying down one’s life for a friend. And it makes me want to run the other way. Because that is decidedly not easy. I think of all of the churches who have left our denomination rather than abide with us in love, done with struggling through the difficulties of holding different view points in tension. Often the opposite of abiding in love is walking away, leaving brokenness behind.

But I get it. There are times where the easier thing to do feels like the safer, the simpler, the righteous thing to do. Abiding in love, as Jesus describes it here, doesn’t seem to be safe, simple or the love that makes us feel like we always have the right answers. Sometimes it makes us doubt.

I did something a while back that hurt someone I love. It was certainly not my intention to do that. And when they told me why they were upset, it brought a lot of doubt into the story for me. Because I knew I hadn’t meant to hurt them. But had I read the situation completely wrong? Was I at fault? What did I need to do to make it right? And it felt awful. I didn’t want to hurt someone I love. But abiding with someone who is angry with you is no fun either. I wanted to run away. Instead I picked up the phone and called. Abiding requires the other person’s abiding as well. And I couldn’t make them answer the phone.

Sometimes abiding means sitting in a holding pattern, hoping that relationships can be fixed.

I was just at a Board meeting of the Covenant Network, where we find ourselves at an interesting time in the life of the church. The Network was founded after the GA in 1996 approved discriminatory ordination standards in the Book of Order. They thought it would take a year to overturn them. That one year took until 2011, after Amendment 10A was ratified. I’m grateful for the people who abided all of those years. Both the people who waited for the church they loved to recognize and accept their gifts and the people who continued to seek changes on behalf of others.

I am a very recent arrival to this work in the church and it is no exaggeration to say being invited to join the Board of the Covenant Network has been a highlight of my professional life. I am so grateful for those who abided, for many long years, to receive justice and welcome, for themselves and for others. I know there were times when some of you wondered why we bothered. Why keep going to presbytery meetings where people would say things that would make us hurt? Why keep following rules that were unjust and unfair?

“No one has greater love than this, to lay down one’s life for one’s friends. You are my friends if you do what I command you.”

Covenant Network didn’t go away after ordination changes were legislated. Because they recognized it would take the church some time to abide with and abide in the changes. We still know that to be true today, 4 years later. And now that we are done, we think, with our legislative work, we have more time to spend in other ways, as we work for the unity of the church. And as presbyteries recently approved marriage equality, they also approved the Belhar Confession from South Africa, an important document that reminds us of our call to reconciliation.

So the Covenant Network, in addition to continuing to work for full inclusion of LGBT people in the life of the church, is also committing to being Belhar people, and walking alongside others in the church who are already working for reconciliation and justice. Abiding and accompanying.

Here’s a part of the Belhar confession:

We believe
• that Christ’s work of reconciliation is made manifest in the church as the community of believers who have been reconciled with God and with one another;
• that unity is, therefore, both a gift and an obligation for the church of Jesus Christ;
that through the working of God’s Spirit it is a binding force, yet simultaneously a reality which must be earnestly pursued and sought; one which the people of God must continually be built up to attain;
• that this unity must become visible so that the world may believe that separation, enmity and hatred between people and groups is sin which Christ has already conquered, and accordingly that anything which threatens this unity may have no place in the church and must be resisted;
• that this unity of the people of God must be manifested and be active in a variety of ways;
• in that we love one another;
• that we experience, practice and pursue community with one another;
• that we are obligated to give ourselves willingly and joyfully to be of benefit and blessing to one another;
• that we share one faith, have one calling, are of one soul and one mind; have one God and Father, are filled with one Spirit are baptized with one baptism, eat of one bread and drink of one cup, confess one name, are obedient to one Lord, work for one cause, and share one hope;
•together come to know the height and the breadth and the depth of the love of Christ.
•together are built up to the stature of Christ, to the new humanity;
•together know and bear one another’s burdens, thereby fulfilling the law of Christ;
•that we need one another and upbuild one another, admonishing and comforting one another;
• that we suffer with one another for the sake of righteousness; pray together;
•together serve God in this world; and together fight against all which may threaten or hinder this unity.

I’m curious to know where you see resonance with this confession and with our community. Living into unity, working for reconciliation, abiding in love—it is holy work to which we have been called. And while it is not easy, it is also not thankless. The moments of reconciliation and reunion can bring life.

Last year, the New York Times ran some photos of people from Rwanda who had been on the opposite side of that country’s horrible war. There was a project to bring together perpetrators and their victims. Some were only willing to be photographed together. Others have worked for healing and restoration in a reconciliation project.

From the article: “These people can’t go anywhere else — they have to make peace. Forgiveness is not born out of some airy-fairy sense of benevolence. It’s more out of a survival instinct.” Yet the practical necessity of reconciliation does not detract from the emotional strength required of these Rwandans to forge it — or to be photographed, for that matter, side by side.

This is Jean Pierre Karenzi and Viviane Nyiramana: 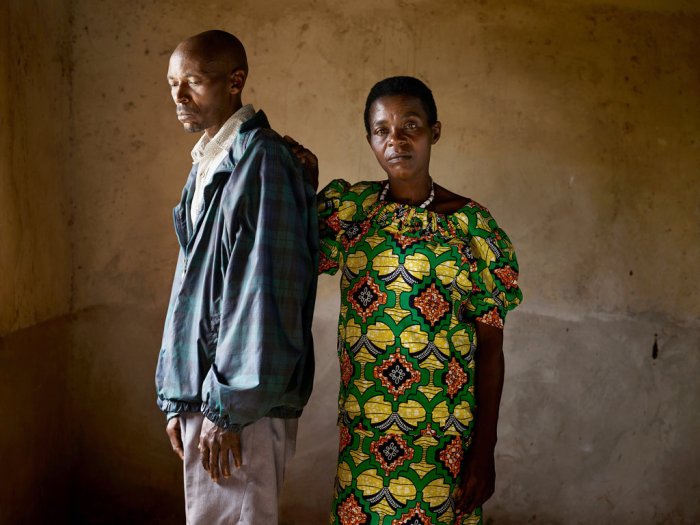 Karenzi: “My conscience was not quiet, and when I would see her I was very ashamed. After being trained about unity and reconciliation, I went to her house and asked for forgiveness. Then I shook her hand. So far, we are on good terms.”

Nyiramana: “He killed my father and three brothers. He did these killings with other people, but he came alone to me and asked for pardon. He and a group of other offenders who had been in prison helped me build a house with a covered roof. I was afraid of him — now I have granted him pardon, things have become normal, and in my mind I feel clear.”

The reconciliation and conversations you and I may be involved in here in this community and in the church are likely not to feel as life and death as those conversations in Rwanda. That doesn’t mean they will be easy. But we do this work in hope. Jesus said, I have said these things to you so that my joy may be in you, and that your joy may be complete. And so we trust in Jesus’ instructions to abide in love and we abide for joy. Thankful to be abiding with you. Can’t imagine a better place to abide in Christ’s love together.

One thought on “Abide”