Before our story you heard this morning, Jesus has just asked his disciples “who do people say that I am?”

And right after this passage, Jesus is transfigured on the mountainside, which we heard a few weeks ago.

Before we can see the glory, Mark wants us to wrestle with questions of identity.

Who do you say that I am?

In response to the question, Peter gives the right answer. “You are the Messiah.”

So then Jesus begins to teach them some things. To make sure that everyone understands the word “messiah” the same way Jesus does.

There will be great suffering;
Rejection by the elders, chief priests and scribes;
He will be killed;
He will rise again from the dead three days later.

And in a gospel where Jesus spends a lot of time telling people to be quiet about what they’ve seen and heard, here he says these things quite openly.

There is no messianic secret here.

Mark makes clear that if you want to know one thing about Jesus, it is that he must undergo great suffering, rejection by the authorities, death on a cross, and resurrection from the dead. The centerpiece of this gospel is this message right here.

I am on the sidelines cheering Peter on, though.

Because, really, is this the message anyone wants to hear?

Do you know how long I wrestled with this text this week? I don’t want to preach this. I, like Peter, want Jesus to be a Messiah who will deliver us from the bad guys. I wonder what Peter said when he rebuked Jesus. “Let’s stop this nonsense of suffering and death, Jesus. We know enough about suffering. We don’t want these burdens. Let’s talk about power. Let’s talk about bringing back the throne of David. Let’s make people happy!”

But, of course, Jesus is having none of that.

Peter should know that the man who rebukes the wind will have no trouble rebuking him. “Get behind me, Satan. For you are setting your mind not on divine things but on human things.”

I can’t imagine anything worse than the person I love the most telling me that.

I’m so grateful Peter and Jesus had a relationship that allowed them to say difficult things to each other and to then move beyond it. I’m grateful for the people in my life who would, and do, “rebuke” me when I’m headed down the wrong path.

And I’m thankful that Peter is able to receive this public rebuke for what it was—a truth telling and not a shaming. He goes on to be the rock on which Jesus says he will build the church.  We need to be people who tell truth to each other, even difficult truths. We need to not be people who tell truth to shame people, driving them away from the community that could help and support them. We need to lead each other toward reconciliation and hope, giving people a chance to redeem their mistakes.

Those are often difficult conversations. They require us to say things we’d rather not say to people we love.

And when those conversations are directed our way, they require us to swallow our pride, to acknowledge when another person’s perspective can help us live into better community and into stronger truth.

An odd thing happened on the interwebs this week. It, in no way, is comparable to Jesus discussing his suffering, death, and resurrection. I want to be clear on that from the start.

It was about a dress.

What color does this dress appear to be?

Thursday night lots of people posted pictures of this dress asking what color people thought it was. At first I thought it was some sort of joke, because there was only one right answer to that question, right?

In the first picture I saw, the dress appeared to be white and gold. I showed it to Elliott and he agreed with me. I commented as much on a friend’s page and then I went to the gym.

I got home an hour later and saw the same picture of the same dress and thought, “wait a minute. What happened? How did the dress become blue and brown?” I showed it to Elliott and Justin and they both agreed I was insane because the dress was clearly white and gold.

Now, there are all sorts of reasons for why our eyes adjust the colors of things we see and I’ll leave all that to science. Yay, science!

But I found it interesting that 3 people, looking at the exact same picture of the exact same dress could see such different things. And could so quickly declare that their loved one was “insane” for seeing it differently.

This crazy dress illustrates something and it is more than just an internet time waster.

As Momastery said: NO ONE TELLS IT LIKE IT IS. We can only tell it LIKE WE SEE IT –

It is something to remember in little conversations about unimportant things—like the color of a dress.

or
what does the church say about same gender marriage?

or
what does Jesus mean when he says we should take up our crosses and follow him?

Reading this story again, I wonder if the most shocking part of this is not Jesus’ talking about rising from the dead, but was Jesus and Peter rebuking each other and still being good friends at the end.

After the rebuking, Jesus calls to the crowds. He extends the conversation beyond the one he was having with his close friends and invites other people to join it.

They have to leave the crowd if they want to be disciples. They can’t be observers and watchers on the sidelines and have the relationships you need to have to get through the cross carrying and the losing your life for his sake.

Jesus tells the crowds that if any one of them want to follow him, they’ll have to pick up a cross and follow him. Crowds can’t be rebuked. And crowds can’t carry his cross.

To be a disciple of Jesus, you can’t stay in the crowd. At some point, you have to step out of the anonymity of the crowd and pick up a cross. Not to suffer just so you can say you suffered, but to stand for something. To set your mind on divine things rather than human things. Being a disciple is a decision to turn toward relationship with God and with each other.

And it can’t be done from the anonymous crowd.

It takes work to live into relationships that are real, vulnerable, supportive, and loving. As we, as a society, spend more time interacting with each other online, I think we are challenged to keep our relationships deep and authentic. It is easy to throw out a comment that doesn’t rebuke someone in love, but just in anger.

I know I’ve done it.

I know it has been done to me.

On my blog, I’ve had to delete comments and block a few people from being able to post comments. It isn’t because they disagree with me. I wouldn’t have many comments if that were the standard. I fully expect people to disagree with me.

But if a person tells me that I, or someone I love, is headed to Hell because we don’t read the bible the way they do, I don’t engage. I delete. It is one thing to come to my office and talk scripture interpretation. It is another to condemn me to hell without knowing anything about me. That is not rebuking done in love.

At a rally at the state house earlier this winter, a “christian woman” came up to the Southminster people on the steps and told them they should read the Bible, and they should obey God, and they should change their ways. Andy told her she could go ahead and leave. And she did. She went over to another group to instruct them.

After he told me about it, I went up to her and told her she was welcome to come meet with me during the week and she could tell me her story and I would tell her ours. I told her it was not okay to tell people from my congregation that they were going to hell. She has not come to meet with me. She didn’t want relationship. She wanted only to judge.

I heard a story last month on This American Life about a woman who was being seriously trolled on the internet. People were saying awful things to Lindy West online, all day, every day, and were doing so anonymously. She wrote about the worst troll, the one who pretended to be her recently deceased father, saying she was a disappointment to her father from beyond the grave.

She wrote an article about how much that hurt. And then, much to her surprise, her troll wrote her and apologized. They ended up having a conversation. She was able to ask him questions about why he did what he did. He was able to hear her pain as she told him that his stunt was the meanest thing anyone had ever done to her. She was able to rebuke him in a way that changed him and helped him live into a new way of being.

Here’s what she shared at the end of the story.

“I don’t wish my trolls any pain. Their pain is what got us here in the first place. That’s what I learned from my troll.…I can’t give purpose and fulfillment to millions of anonymous strangers, but I can remember not to lose sight of their humanity the way they lost sight of mine. Humans can be reached. I have proof.”

You hopefully do not have to deal with internet trolls.

As we continue on this Lenten journey, however, how can we live into deeper and more vulnerable relationships? With each other, and with people who do not see the world the same way we do?

Moving out of the crowd and into discipleship means being intentional about building relationships with the people around us on the journey.

Is there someone you need to know better in order to understand why they see things so differently than you do?

There’s a quote I’ve seen often, attributed to people from Plato to a Scottish pastor from the 19th century. It reads, “Be kind. Everyone you meet is carrying a heavy burden.” 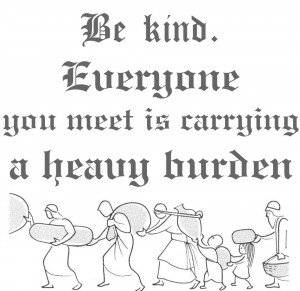 Isn’t that what carrying a cross is like too?

This week, as we move further down the lenten path, headed toward the cross, as we pick up our crosses and follow Jesus, I invite us to attend to the burdens we each carry, and seek to understand the burdens others carry. Let us help each other in love, even the love that leads to rebuke and leads to discipleship.

One thought on “What We Carry”