A friend shared an article on Facebook today that has left me conflicted and pondering things in my heart.

The article, from the New York Times, is about universities and evangelical Christian student groups in conflict over non-discrimination policies.

In a collision between religious freedom and anti-discrimination policies, the student group, and its advisers, have refused to agree to the college’s demand that any student, regardless of his or her religious beliefs, should be able to run for election as a leader of any group, including the Christian association.

I’m a fan of religious freedom (which is different than using religion to discriminate in the public sphere). Religious freedom is what allows the congregation and denomination I serve to practice our faith as we feel led by God and not the way the government tells us we must.

But student groups at colleges are not churches. They are groups of students. They are fraternities and sororities. They are clubs. They are affinity groups (political, religious and otherwise).

I have a child headed to college in the fall. I confess I don’t want him to wander into a group where he would face discrimination of any kind. We specifically did not let him apply to one college (not sure he would have wanted to go to this particular school anyway) because they only hire Christians–from the groundskeepers to the university president. And while that college can choose to do that, I choose to believe college is the time to expand your horizons, not limit them. College ought to be the time to meet people of other religious traditions, to be challenged in class by people who see things differently, and to learn and build friendships with people outside of your own tradition.

I’ve heard people say, “well a gay student should just join a different group and stay away from the evangelicals who want to discriminate“. Which would be fine. Unless the gay student happened to be evangelical.

This trend among colleges to enact these policies is gaining steam because, I suspect, evangelical Christians continue to assert that the only way they can practice their faith is by discriminating and excluding gays and lesbians from leadership, or perhaps even membership.

And it makes me wonder how long the evangelical corner of the church is going to continue to claim they can only practice their faith freely if they are allowed to discriminate? Would we even be in this mess if they weren’t so loudly claiming their own persecution and the rest of our sinfulness?

Just this morning I saw this article, where a megachurch pastor said this about churches like the one I serve:

“They have no allegiance to the Bible,” he said. “You go back to every one of those seminaries … for a century [they] have been deniers of biblical authority, they have no relationship to scripture, they are the apostate church, they are Satan’s church.”

And I saw this picture being passed around Facebook. Even though the sign appears to be fake, it speaks to a perspective in our culture that condones this kind of judgment.  (Can anyone find out if this is a real church with this sign?) 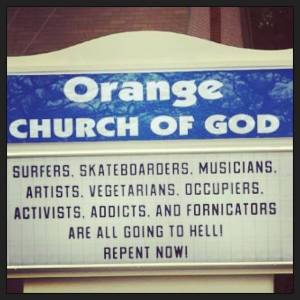 Orange you glad you don’t go to this church?

In the denomination I serve, clergy are now able to preside at same gender weddings in jurisdictions where that is legal. Nobody is required to do so. Some churches are now leaving the denomination because of this change. Even though they do not have to participate in same gender marriages, they choose not to stay in our fellowship. Here is a comment from my blog post about marriage equality in the PCUSA, when I asked why they needed to leave:

“Your heresy has changed the perception of everyone in our community toward this faithful congregation. If we stay, we carry continuously, the shame of your sin. If we leave, presbytery will strip the members of everything they have sacrificed to contribute to the church.
Why would a congregation leave? Well, for faithful Presbyterians, it is always in response to Scripture: “Do not be yoked with unbelievers. For what do righteousness and wickedness have in common? Or what fellowship can light have with darkness?” 2 Cor 6:14”

Evangelicals can continue to make statements like these all they like. I’m not sure why they would be surprised when society tells them this kind of discrimination has no place in our public sphere. They should also not be surprised when people stop going to their churches.

The life-giving, Good News of Jesus Christ has nothing to do with discriminating. What has attracted people to the person of Jesus for the last 2,000 years is that he consistently welcomed the outcast, included the people excluded by society, and spoke against structures that sought to narrow the welcome and love of God.

4 thoughts on “the Faith of Discrimination”