This past Thursday was the day the church celebrates the Ascension, which is the 40th day after Easter, when we commemorate the Ascension of Christ into Heaven.

And I know that we live in a world where people don’t get carted off into the clouds. Or at least I don’t live in that world. I have never seen someone ascending to heaven.

But don’t discount these texts because of that fact. The people for whom these texts were written came from a tradition of ascension. Moses ascended Mt Sinai and was gone 40 days, up in the clouds on the mountain, receiving the Law. And Elijah the prophet ascended up into heaven when his time as prophet was over. 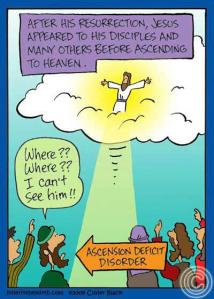 A friend shared a cartoon with me about ascension, because pastors are church nerds who share cartoons about churchy things. It shows Jesus ascending into the clouds while the disciples look up into the sky. Except for the one guy who is crying out “where!? Where?! I can’t see him!” and the cartoon reads,  Ascension Deficit Disorder.

While the cartoon is clever, it made me consider our Ascension Deficit Disorder when I look around at our society.

It isn’t that we can’t see Jesus ascending, as the cartoon jokes about. It’s that we seem to live as if we don’t believe he ascended.

Because, to believe Jesus ascended into heaven, would mean we believe what the writer of Ephesians wrote when he said,

“God put this power to work in Christ when he raised him from the dead and seated him at his right hand in the heavenly places, far above all rule and authority and power and dominion, and above every name that is named, not only in this age but also in the age to come. And he has put all things under his feet and has made him the head over all things for the church, which is his body, the fullness of him who fills all in all.”

Now this may not be our language, the way we would describe our relationships to each other. But maybe this is like a corporate flow chart of the heavenly places.

If early Christians were trying to figure out who Jesus was, now that he’d ascended back to heaven and wasn’t walking around Jerusalem any more, they are told here that God had lifted him up to heaven, seated him at the right hand, with all power and authority and dominion and power. Now and in the age to come.

And everything is under his feet, including the church.

There’s God. And then Jesus. And then way down below Jesus’ feet, is the church.

Quite a straightforward description.

And the reason I worry we have Ascension Deficit Disorder is because we seem to have gotten confused about whose job it is to save the world.

If you read the news and pay attention to what some church leaders are saying, it would seem they think we, the church, has all power, dominion, and authority, and that we need to start exercising that power if we want to save God.

I’ll give you some examples of that, but to be clear, the Ephesians style corporate flow chart of some Christian leaders today is that the church has been lifted up and has all dominion, power, and authority in this age and the age to come and that Jesus is under their feet.

Here’s one illustration we’ve seen before and I’m sure will come back in a few months. The War on Christmas.

There are people who claim the fact that some people wish people “Happy Holidays” instead of “Merry Christmas” is a sign that the powers and principalities of this world are waging a war against the birthday of Jesus—and are winning.

If we believe in a risen savior and in the God who raised him from the dead, then do we really believe a “war on Christmas” could even be successful, were it really being waged? Could the way we greet people in December actually diminish the powerful miracle of Christ’s birth in any way? Not a chance.

Another illustration. I’ve been invited to some local/regional events with a theme of “taking back the nation for Jesus”. I suspect these events come from people whose hearts are in the right place. They want the world to know about the love of God in Jesus Christ, and that’s a good thing. But the premise that Jesus could have been “taken out” of our nation in the first place is Ascension Deficit Disorder.

Because if God has given the risen Jesus a seat at the right hand of God in the heavenly places, do we really think any human invention or philosophy could over power him?

Whenever people claim their religious freedoms are being squashed because someone else is being given religious freedoms they don’t agree with—that’s Ascension Deficit Disorder. Because if we believe in a risen Lord who is over all things, then can’t we trust him to even be over all those who differ from us?

Whenever we battle on Jesus’ behalf, acting as if he’s weak and helpless and needs us to survive—Ascension Deficit Disorder.

We all do this. This isn’t just something I’m criticizing those “other” Christians for, although that is clearly more fun. We suffer from the disorder at times too.

When we fret and worry over things that are beyond our ability to change or control.
When we believe our future is in our hands and not resting securely in the hand of the God who created us.

The symptom list of Ascension Deficit Disorder is long.

And it isn’t a new Disorder, even if we might be seeing it in new ways. We confuse heavenly power with earthly might and political control. We want to believe if Jesus is in charge over this age and the age to come, then it means he will literally fight our battles here on earth and will put our guy in the White House. We want him to take some of this “immeasurable greatness of his power” and use it to actually put our enemies under his feet, so he can squash them like a bug.

Before he ascended into heaven, listen to Jesus reply in Acts when the disciples asked him about this:

So when they had come together, they asked him, ‘Lord, is this the time when you will restore the kingdom to Israel?’ He replied, ‘It is not for you to know the times or periods that the Father has set by his own authority. But you will receive power when the Holy Spirit has come upon you; and you will be my witnesses in Jerusalem, in all Judea and Samaria, and to the ends of the earth.’

They wanted him to restore the political kingdom of Israel. He told them to go be witnesses.

They asked about military takeover. He answered with instructions to share the story of Jesus with the people they were to meet, in Jerusalem, in all Judea and Samara, and to the ends of the earth, even to San Francisco.

Being told to be witnesses instead of being military generals or political ambassadors is a reminder to us of how we relate to Jesus. We are not the ones seated at the right hand of God. We are the ones in whom the fullness of his love dwells.

And so we go out into the world and tell people of that love as witnesses. Of course, to be a witness requires some integrity.

When people hear our testimony, they have to be able to trust and believe what we say.

So we talk about where we have seen God working in our own lives, and then we live as if we believe that to be true. That is why we serve others, it is why we reach out into the community, it is why we seek to make this a place of welcome—because the God who raised Jesus and exalted him with all power, glory, and dominion is the same God who loves us, who cares for us, who shelters us under his wing.

So, when you see people around you, or on the news, suffering from Ascension Deficit Disorder, remember the treatment for this disease is not to respond in force, but to stand as witness and testify.

I suspect most of you are worshiping today because someone once testified in your life. They may have invited you to church. Or they may have just lived their lives with such joy that you wanted to be around them more.

I’ve heard stories from you of your grandmothers or friends who first brought you to church.

I think about the men and women who taught my Sunday school classes each week. And while we had fun with flannel board Jesus, they also had to run interference when little boys cut my hair with blunt scissors. Their constancy, through it all, was a gift, showing me the abiding love of God even when we weren’t particularly lovable.

Whether it is those people who sit with you in silence through the difficult times, or the voice of challenge who calls you back to a healthier path, those quiet, faithful testimonies are the antidote to Ascension Deficit Disorder. In their humble love, we see what heavenly might and power looks like.

So, what are we to do with Ascension? Once we get over the Ascension Deficit Disorder, and recognize our call to be witnesses and not to be Jesus who is seated at the right hand of God almighty, what are we to make of Ascension?

I want to support the disciples in this. And I promise if I ever see one of you lifted into the clouds, I will stare agape until well after the soles of your feet have vanished from sight.

I don’t think that’s the way we will rise, or are called to rise, in truth.

But maybe Ascension is our reminder to rise.
Not to the skies, perhaps.
We rise, above those things that try to limit us, to keep us from being the people God has called us to be.
We rise. By challenging ourselves to continually understand God and this journey in new ways.
We rise. By helping other people rise—out of poverty, out of hunger, out of loneliness and loss.
We rise. By working for justice, so all of God’s children can live their lives in freedom and peace, with the same rights and privileges we take for granted.

“People of Calvary, why do you stand looking up toward Heaven?”
We look to heaven because we need the reminder to rise.

As Jesus rose into the clouds, he left his disciples with these words:
But you will receive power when the Holy Spirit has come upon you; and you will be my witnesses in Jerusalem, in all Judea and Samaria, and to the ends of the earth.’

Thanks be to God for those who have testified and been our witnesses along the way. Through them we have seen the glory of God. May we rise up and continue our work of testimony in words and gestures of love, kindness, and service. Amen.