Our passage today gives us a glimpse of Paul’s missionary journeys. Paul had been preaching and teaching before this, and aware the authorities were not on their side. King Herod Agrippa, we’re told, “laid violent hands upon some who belonged to the church. He had James, the brother of John, killed with the sword.”

After Herod saw how that pleased the crowds, he arrested Peter too. The church is being hunted. People are in hiding. And the communities into which they are going to take the good news are afraid to get on Herod’s bad side. In chapter 12, the people of Tyre and Sidon, beg Herod to get in his good graces, to not be seen as trouble makers like these evangelists. They cry out to Herod that he has “the voice of a god, and not of a mortal”. (12:22)

But the word of God continued to advance and gain adherents. (12:24)

It is into this context that Barnabas and Paul are set apart by the Holy Spirit to the work God called them to do.

When we hear that the Holy Spirit called Barnabas and Paul, but did not call Simon the Niger or Lucius of Cyrene, or Manaen from Herod’s court—I felt a little bad for Simon, Lucius and Manaen. Sitting through the Holy Spirit draft and not getting picked even as a backup player for the Cleveland Browns.

Also, I realize the Holy Spirit never calls everyone to the same work. Maybe Simon was great at handling details behind the scene, but was a terrible preacher. Maybe Lucius was needed to offer a ministry of compassion and healing. Maybe the Holy Spirit needed Manaen to stay at Herod’s court, to continue to witness to God’s mercy from within the palace.

Paul and Barnabas, though, have whatever gifts the Holy Spirit discerned was needed for this trip. And they say ‘yes’ to the Spirit’s call that is confirmed by the local congregation. And off they go.

We heard tonight about their trip to Lystra.’ 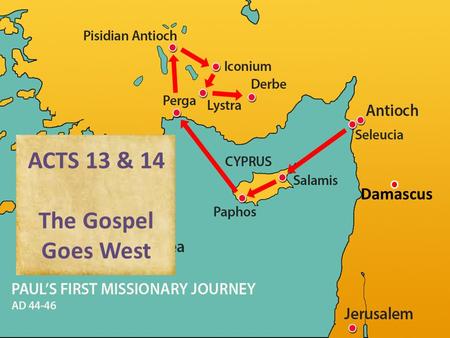 Lystra was in what today is Turkey, and had been colonized by Rome about the time Jesus was born. There, Paul heals a man who had been physically disabled since birth. And the crowd goes nuts! “The gods have come down to us in human form!”

They name Barnabas ‘Zeus’ and Paul ‘Hermes’. I’d want to be Athena, if anyone wants to give me a god name. The Lystrans want to offer sacrifices to these gods who have come and healed in their presence.

Paul and Barnabas, facing a realization that the situation has escalated quickly, again, try to talk them down.

Before we get to that, though, let’s acknowledge that we all experience the world through the lenses of what we already know. In the culture of Lystra, the gods they knew were the Greek gods. And they had started to learn about the Roman gods, who went by different names, even if the gods, themselves, weren’t so different. Zeus was named ‘Jupiter’ in Roman mythology. It is natural that they would see a miracle performed in the name of some god they’d never heard of and then figure it must be the gods they knew with another name.

Looking around at our world, I think there are plenty of illustrations of people trying to worship mortals as if they were gods. Remember, they’d told Herod Agrippa that he spoke as a god and not as a mortal. They said that to Herod right before God struck him down. Dead. Turns out Herod was speaking as a mortal after all.

The people of Lystra are no different than we are. The only difference is the name of the gods we want to apply to Paul and Barnabas.

So the priest from the temple of Zeus shows up with garlands and oxen to sacrifice and the crowd is there. for. it. Crowds of any era love a good flag waving rally where someone tells them they’ve got all the answers and all we have to do is follow them so that everything will be great again.

Paul and Barnabas try to talk them down from the frenzy.

“Friends, why are you doing this? We are mortals just like you, and we bring you good news, that you should turn from these worthless things to the living God, who made the heaven and the earth and the sea and all that is in them.”

I think it’s a fine sermon from Paul. I love the way he points to rains from heaven and fruitful seasons—connecting God to things the people would know.

But Paul’s message didn’t really connect with the crowd.

Some biblical scholars think Lystra was one of the first places the gospel spread to a gentile community without going through a common ground of Judaism. There were some Jews in Lystra, but not a synagogue.

Think about how hard it would be to cross those cultural and language barriers in order to talk about Jesus, let alone to talk about the weather or ask for directions to the local Starbucks.

There was a young man worshiping here for a time. Many of you may remember him. He had just moved here from Thailand and was unfamiliar with Christianity and was learning English. Bruce brought him here so he could get acclimated to life in the US, and meet some kids his age. One morning, as I was saying the words of institution before communion, “this is my body, broken for you”, he turned to Bruce, and said, “wait. Whose body are we about to eat?!?”

Some things get lost in translation.

Bruce wasn’t able, in that moment in worship, to explain the intricacies of a Presbyterian understanding of the Lord’s Supper in the minute they had before it was time to walk forward. So he said, “I’ll explain it later, but it’s bread we’re eating today. Not an actual body”.

In Lystra, Paul wasn’t able, in that moment, to translate the love of God in Jesus Christ in a way that connected with the crowd. In part, I think, it’s harder to connect about things like this in a crowd. One on one conversations give people more space to ask questions, to absorb information at your own pace. Maybe Paul could have won over the crowd with his preaching if he’d had more time.

But people showed up to compete for the crowd’s attention. And a crowd’s attention is fickle. Religious leaders from neighboring towns show up and win the crowd over. The crowd that was ready to worship Paul and Barnabas as gods now starts to stone them. (With rocks, not marijuana).

They stop throwing rocks when Paul appears to be dead and disciples gather around his body. I guess they finally believed Paul was a mortal, and not a god. Paul and Barnabas are able to leave the city and head to the next town.

Paul will come back to Lystra, despite that reception. On their way home from this missionary tour, they stop back to encourage the believers. And on his next tour, he’ll come back and Timothy will join him and Silas. The first visit wasn’t a success in the moment, but it wasn’t a failure either.

People in crowds don’t make disciples. But people finding support from other believers, and staying in touch with Paul as he travels, and learning from each other, and weeding the flower beds, and gathering for potlucks, and all of that other stuff that goes along with being church—that’s where disciples are formed. Timothy’s faith was nurtured not in the big throngs of a crowd calling Paul a god, but in the in between times.

There are lots of ways we are lost in translation these days. More and more people identify as “none”, having no religious affiliation. Fewer and fewer people are familiar with the stories of scripture or the language of faith. If I invited people to celebrate the eucharist in the narthex and then attend a class on the doctrine of soteriology led by the teaching elder—very few people would have a clue what I was inviting you to do. (Translation—have communion in the hallway and then attend a class on the teachings of salvation led by the pastor). Even if we stopped using all churchy language when talking to people in the community, the truth remains that the gospel is hard to translate.

We preach power through vulnerability, and wisdom through foolishness.

We preach the first will be last and the last will be first.

We follow a man who refused to become an earthly king and was skeptical of the flattery of the crowd.

Our God cares for the poor, the hungry, the widowed, the imprisoned because there is awareness that the rich, the well fed, and the free will and do care for themselves.

How are we going to work on our translation?

I replied that I’d rather see churches willing to get out in to the community, where they could meet people in ways that build relationship. If we go out to do good things in the community with the purpose of capturing them to become new members here, people won’t fall for it.

A number of years ago when we started going to the PRIDE festival, we intentionally went because it was the place the church was called to be, not because we expected that the people we met would follow us back to church. Did some people find us because we were there? Yes. But that’s not why we went.

This video is what gave a member of the church the idea to go to PRIDE. Watch this:

I love this video because I think she translates the message of God so well. And to people who were told they weren’t allowed to speak God’s language. She gives it back to them.

There are lots of ways to translate the gospel into language that people can understand.

The old hymn ‘There is a Balm in Gilead’ has a line that sums this up.

May we find each other in translation.
Amen