Last week, we were introduced to Moses, encountering God in a burning bush. His curiosity led to answering God’s call to lead God’s people out of slavery and into the Promised Land. We jumped over a lot of excitement, so I hope you’re reading between the preaching stories.

As the Israelites wandered in the Wilderness, God and Moses have continued to be in conversation. Often because the Israelites were complaining and grumbling—some version of “are we there yet?” and “why did you bring us to the wilderness to die?”

At all of those junctures, God has heard their cries and responded to Moses’ pleas for help. Manna in the wilderness to eat, water out of a rock, etc. The people have seen God’s provision. It hasn’t yet led them to really trust God the way we think we would trust God if we could just see one miracle or sign. Even God seems to think true obedience and trust is just around the corner of one more miracle or sign.  Just before today’s passage, God says to Moses: ‘I am going to come to you in a dense cloud, in order that the people may hear when I speak with you and so trust you ever after.’

Narrator: They will not trust him ever after.

God offers a whole laser light show extravaganza. The mountain shakes and smokes. There’s a cloud around it. Moses would speak and God would answer in thunder. Right after the verses we heard this morning, we’re told, “When all the people witnessed the thunder and lightning, the sound of the trumpet, and the mountain smoking, they were afraid and trembled and stood at a distance, and said to Moses, ‘You speak to us, and we will listen; but do not let God speak to us, or we will die.’ “

Moses stays on the mountain, talking with God, for 4 more chapters, I mean, for a total of 40 days and 40 nights.

Lots more instruction is given to Moses in those days and nights. Helpful things like:
—guidelines for a man who sells his daughter
—and punishment for children who curse or strike their parents
—what to do if someone leaves a pit open and someone falls in it
—God is opposed to female sorcerers, but there’s oddly no mention of what to do to male sorcerers.

Those chapters have a lot of “eye for an eye” style justice language.
Some of the instruction sounds odd to our ears.

Some of it sounds timely:
“You shall not wrong or oppress a resident alien, for you were aliens in the land of Egypt. You shall not abuse any widow or orphan. If you do abuse them, when they cry out to me, I will surely heed their cry.”

Anyone notice what was missing in the story of the 10 commandments we heard this morning?

The famous tablets of stone. They don’t make an appearance until chapter 24.

A friend of mine posted this picture on instagram. When I first saw the picture, I wondered who the person who made this “monument” to the 10 commandments was making it for? As a gentle reminder to themselves? As a not so subtle reminder to their neighbor?

At some point Friday, while I wasn’t doing so well at focusing on writing this sermon, I had to look up where the picture was. I needed to know! Turns out there is an entire 10 Commandments Theme Park in North Carolina where you can see this. It’s almost 400 feet across. Nearly 400 steps to reach the top.

Ready for the best part?

If only there were a commandment about remembering the sabbath and keeping it holy.

A few years ago, I was returning a Bible at Barnes and Noble for exchange when the salesman stopped to remove the anti-theft sticker in the Bible.

“We have to add anti-theft devices to Bibles. They are our most stolen merchandise,” he told me.

“Really? Bibles are stolen more than any other book? That is not a good statement about the state of American Christianity”, I said.

You shall not steal.

We seem to enjoy using our rules to help other people live, and seem to be less interested in having them help us know how to live.

It is better for God to be the one writing in stone. We want to edit. We like to make qualifications, find exceptions.

Remember the Sabbath Day and keep it Holy*–
(*unless you have a really busy week ahead, and then it is okay to work on the Sabbath).

Or
You shall not steal*–
(*unless you really need it and they have enough and wouldn’t miss it anyway.)

Or
You shall honor your mother and father*–
(*unless they embarrass you in front of your friends or expect you to unload the dishwasher).

So, what are we to make of these commandments? They were important enough for God to make sure the Israelites really understood them. God gave the commandments to them in stone.  AND  They seem to be things that we break on a daily basis.

What are we to do with rules we are more comfortable applying to other people’s lives than to our own?

God has chosen to be our God not because of our worthiness, but because of the mysterious grace of God.

Let’s pause there for a second.

God doesn’t love us, or choose to be in relationship with us because we have made ourselves great,  or because we have done big things,  or made lots of money,  or lost all that weight we said we were going to lose,  or gotten our lives organized,  or because we got a big promotion at work,  or even because we were kind to that person who needed help carrying their groceries to the car.

All of those things may be wonderful attributes of ours. Or not. But they aren’t why God is in relationship with us.

God chose us before any of that.

What that evokes in me is gratitude.  It calls me to ask, “how can I respond to such a gift?”

The 10 Commandments give us an idea of our response. God spoke all those words to help us live together in Covenant before God and with each other.

Narrator. She will, don’t worry.

But the truth is, if I’m not attending to Sabbath in my own life, it doesn’t matter whether someone else does or not.

The 10 Commandments remind us to do our own work, to attend to our own behavior, so we can love our neighbors better, and we can love God better. 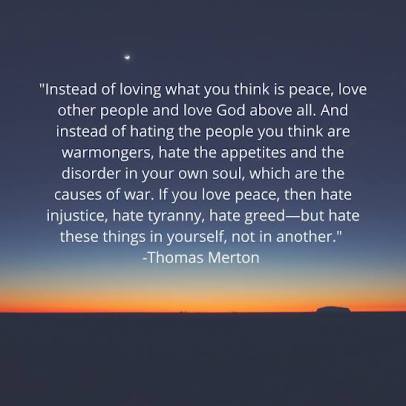 I might disagree with Merton’s use of the word “hate”. I think the word hate leads us toward destructive criticism of ourselves and away from the observational awareness of our own behavior that can lead to transformation. In any case, how would our society be better if we could focus more on our own behavior and less on the behavior of others? What if we could love our neighbors as God loved us?

Ultimately, of course, the 10 Commandments are only pertinent for people who see a value in living in community, who care about people other than themselves. It has less relevance, perhaps, to people who go off and live in a cave, never interacting with, or caring about,  another person. If each of us were an island, unto ourselves, we wouldn’t have to worry about coveting our neighbors cows or porsches. We wouldn’t be stealing, committing adultery, or murdering because we’d have no neighbors from whom to steal, with whom to commit adultery, or to murder.

The 10 Commandments call us into healthier behavior in ourselves, so we can be in better relationships with each other.

Dr. Robert Waldinger leads the Harvard Study of Adult Development, the longest study of adult life, ever. After following a group of people, for over 75 years, they’ve discovered that good relationships are more likely to make us happier and healthier.

“This message that good, close relationships are good for our health and well-being – this is wisdom that’s as old as the hills. Why is this so hard to get and so easy to ignore? Relationships are messy, and they’re complicated. And the hard work of tending to family and friends – it’s not sexy or glamorous. It’s also lifelong. It never ends.

This wisdom that’s as old as the hills finds its root in the 10 Commandments. And every time we choose relationship over division, we choose our own flourishing and make space for the flourishing of others.

May it be so.
Amen

One thought on “Top 10 Ways to Improve Other People”