I try to understand Simon Peter. I want to understand him. He’s impetuous and wears it all on his sleeve. He says things the rest of us may be thinking, but aren’t bold enough to say out loud.

Lord? Are you going to wash my feet?

I suspect most of you are like me—I have the same thought Peter does about God washing my feet. It upends the order of things. It makes me uncomfortable, and not just because feet seem private and I don’t really want anyone near my feet. It makes me uncomfortable to think of having dinner with Jesus, who is my hero, my rabbi, my leader—and to have him wrap a towel around his waist, kneel down, and start washing my feet.

So I’m glad Peter asks the question we’re all thinking about.

Jesus responds with, ‘You do not know now what I am doing, but later you will understand.’

For all of Peter’s good intentions, and his sincere desire to be the bestest disciple ever, he’s a man wrapped up in the immediate. He completely misses the “later you will understand” part in favor of crushing it as a disciple.

“Ok. We’re doing this! Jesus, I want you to wash my feet, and then I’d like a spa pedicure and manicure. My hair could use a shampoo too!….” 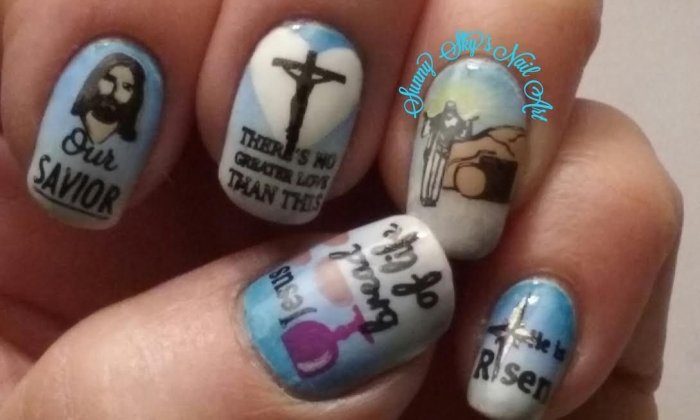 Peter would totally have gotten these nails.

Jesus says, “chill, Peter. It’s just the feet. That’s all we’re doing today.”  (The NRSV translation of this scene might be a little different than mine.)

And then Jesus, after he washes everyone’s feet, puts his robe back on and says, ‘Do you know what I have done to you?’

I’ve said before that I often hear new things in familiar biblical texts. This week, I noticed Jesus doesn’t say “do you know what I have done for you?”  It’s what he has done TO them.

As Jesus explains the foot washing, he describes serving others as an act that changes the people who receive the gift.

Can you picture how that has worked in your life?

I’m thinking about the video of Francois Clemmons talking about being on Mr Rogers children’s show. He was the first African American to have a recurring role in a children’s TV show.

“He had his feet resting in a pool on a hot day and invited me to come over and rest my feet in the water. The icon Fred Rogers was not only showing my brown skin in the tub with his white skin, as two friends. But as I was getting out of that tub, he was helping me dry my feet. And so that scene touched me in a way that I was not prepared. I think he was making a very strong statement. That was his way. I still was not convinced that Officer Clemmons could have a positive influence, in the neighborhood, and in the real world neighborhood, but I think I was proven wrong.

One day I was watching him film a session, and at the end of the program, he takes his sneakers off and hangs up his sweater and he says, “You make every day a special day just by being you, and I like you just the way you are?” I was looking at him when he was saying that, and he walks over to where I was standing. And I said, “Fred were you talking to me?” And he said, “Yes, I have been talking to you for years. But you heard me today.” It was like telling me I’m OK as a human being. That was one of the most meaningful experiences I’d ever had.”

I’m always quick to claim Mr Rogers as my favorite Presbyterian. And he managed to show us Jesus without ever talking about Jesus. 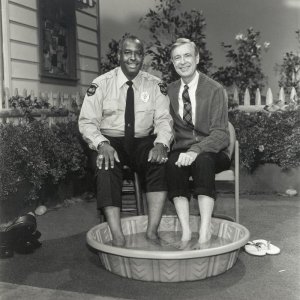 ‘Do you know what I have done to you?’

You also should do as I have done to you.

It is not always an immediate turn around, from being the recipient of grace to being the bearer of it to the world. As Mr Rogers said to Francois, “I’ve been talking to you for years. But you heard me today.”

God’s grace has been talking to us for years.  Are we ready to hear it today?

There are big implications for us, if we’re willing to acknowledge what God has done to us. If we become people who know we’ve been cared for, we’ve been the recipients of divine care and attention—then we’re instructed to go and do likewise. You also should do as I have done to you.

It’s easy to get confused about what our service is for, and about. It’s not to earn God’s love and favor. And it’s not because we deserve to be the people who help others.  Jesus washes their feet because that’s who Jesus is, not because they are more worthy of it than others. Jesus washes the feet of Judas, who will betray him. Jesus doesn’t put conditions on the grace he gives out. He doesn’t ask who has earned it, who has worked for it, who has passed a drug test, or put the most money in the offering plate.

You also should do as I have done to you.

Without conditions. Without exception.

Human nature is tricky. I heard a story on the radio yesterday that reminded me of the studies that show that once we behave in virtuous behavior—it can be as simple as taking a vitamin, taking our own bags to the grocery store, driving a hybrid car, or going to the gym—we are more likely to indulge in some unhealthy behavior or unvirtuous behavior.

“Sometimes after we behave in line with our goals or standards, it’s as if our action has earned ourselves some moral credit,” says psychologist Nina Mazar of the University of Toronto. “This credit can then subsequently be used to engage in self-indulgent or selfish behaviors without feeling bad about it.”

Tracking people at grocery stores, for example, they discovered that once someone had visited the organic produce aisle, their next destination was the alcohol aisle or the cookie aisle. Our virtuous purchase of kale leads us to reward ourselves with ice cream.

One of the things Jesus does to us is give us an example so we don’t fall into that trap of making it about us, instead of about the one who sends us out into the world.

For I have set you an example, that you also should do as I have done to you. Very truly, I tell you, servants are not greater than their master, nor are messengers greater than the one who sent them. If you know these things, you are blessed if you do them.”

Do we know these things?

I invite you to consider some acts of service for others as part of your Lenten preparation for Easter. You can come help clean up the church next Saturday. The week after that, the Community Health House Church will be volunteering at St Vincent dePaul’s food pantry and is starting a food drive. The refugee house church is collecting gently used clothing for people in Boise’s refugee community. You can volunteer at either Grace Jordan Elementary School or Borah High School, listening to new English speakers read books. There are lots of ways they can know we are Christian by our love.

God’s grace has been talking to us for years. Are we ready to hear it today?