The other characters don’t speak the same language as Groot, other than Rocket who helps with translation, which works some of the time. There are other times where Groot’s comprehension of English seems questionable at best. In the movie, hijinks ensue because of translation problems.

In our real lives, real problems arrive when we aren’t careful with our language, and when we don’t speak the same language.

When we use words in ways that are less than truthful, when we forbid words from use, when we refuse to ask people to clarify what particular words mean when they seem to be using them differently than we do —in those moments, we miss out on a chance to comprehend each other, to seek understanding, to find commonality.

Sometimes we are afraid of words that challenge and so we surround ourselves only with comforting words, as if we could protect ourselves from the power of their truths. The prophet Amos got in trouble for delivering God’s message to the people. They begged him to stop because “the land is not able to bear all his words”.

When we don’t speak the same language, our ability to communicate with each other is limited.

And we do not speak God’s language with any kind of fluency. It is not our native tongue.

John’s gospel says “He was in the world, and the world came into being through him; yet the world did not know him.”

We are not divine. We receive God’s words to us in translation. From Hebrew. From Greek. From the stories of scripture, translated in to many different English language versions of scripture.

Even as we read scripture, the language we use informs our experience and is informed by our experience. There are other churches who only use masculine language for humanity and for God. Is it a coincidence that religious traditions that only hear humanity described using male pronouns and words are less likely to have women clergy?

You might think I’m exaggerating the power of a few words. I promise I’m not. When people don’t recognize themselves in the stories they hear, how are they supposed to find their connection?

Our language matters. And our inability to speak God’s language has gotten us in trouble over the years. That trouble is reflected in the pages of scripture, in the annals of history.

Which brings us to John’s gospel. Since we can’t speak God’s language, God chose to speak ours.

In the beginning was the Word.

We heard Luke’s version of the Christmas story earlier, and it is quite different than the way John tells the story. John is less interested in Jesus as a helpless baby. For John, Jesus’ holiness didn’t begin in a stable, under a star. Or even at baptism. Jesus’ holiness began when the universe was chaos and God spoke things into being.

In the beginning was the Word.

By introducing us to Jesus as Word, or Logos in the Greek, John cues us in that his story about Jesus of Nazareth will be different than others you have read. It will be a cosmic tale—what is translated as “world” in English is actually “the cosmos”. The story of God is bigger than the chapters that are about us. The Word was in the beginning.

At the same time, the story of Jesus is exactly about us. “The Logos became flesh and pitched a tent among us” is a closer translation of the prettier English phrase, “The word became flesh and lived among us”.

When we were lost in translation, separated from God, unable to bear the weight of God’s words—the Word became flesh and moved into the neighborhood.
Jesus, the baby born in Bethlehem is the closest translation of the scriptures, and of God’s language, we’re going to get.

I confess we are still facing divine translation issues today, 2,000 years after Jesus’ birth. People still loudly argue about God’s intentions for the world, which usually is God’s intention judge other people.

“The word became flesh and lived among us”.

There are lots of situations in which we find ourselves today that Jesus never mentioned in the Sermon on the Mount. We don’t know what Jesus thinks about net neutrality, self driving cars, or same gender marriage. None of those situations were a part of his world in first century Palestine.

There are themes, however, in his life that may be instructive for us as we seek, with humility, some help with translation. Jesus’ life was a radical word of love. He welcomed people excluded by the powers of earthly governments and societal shame. He ate with tax collectors, touched and healed lepers, and treated women like actual human beings—with respect and appreciation. Later in John’s gospel Jesus says “Indeed, God did not send the Son into the world to condemn the world.” 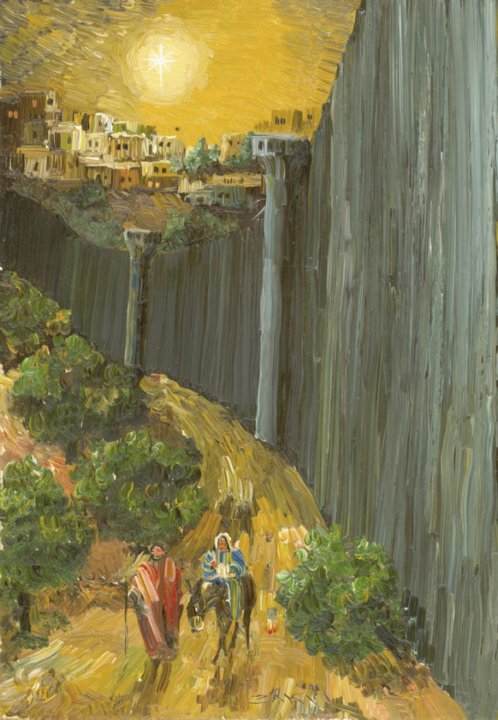 Jesus’ life was also a radical word of justice. At his birth, he was greeted by shepherds and threatened by kings. This preference for the poor and the outcast is visible throughout his life. He turned over the tables of people using the Temple in order to get rich off the poor. He condemned financial behavior that left poor widows hungry while the Temple was coated in gold. Jesus’ very life is God’s Word to us, reminding us to work for justice, feed the hungry, and care for the sick.

I think about the friends who have pulled me aside and kindly and quietly used words to lovingly guide me back to a better path, rather than publicly using words harshly to condemn me or shame me.

I think about the people whose words and lives have modeled vulnerability for me, so that I can better comprehend how Christ’s strength was modeled in weakness and humility, rather than from a position of worldly power.  We host 12 Step groups at this church and one of the gifts of 12 Step programs is the invitation for people to share their stories—the stories of brokenness and the stories of redemption. Are we giving space for people in our lives to share their whole story, so we can see Christ in one another?

I think about the people whose stories and lives have modeled courage for me, standing up to hate and responding with love.

If you’ve ever gone to the PRIDE Festival with us each June, you’ve seen Carolyn Blackhurst walking around the park, apologizing to people who have been hurt by religion because of their sexual orientation or gender identity. It is bold and sacred work that requires humility and vulnerability. When she does that, she’s translating her life into God’s language.

I studied other languages in high school and college. And there are things I understood about those languages intellectually, but they weren’t enough for me to become fluent in them. I’m not a person with many regrets, but I do wish I had studied abroad when I was in college, so I could have immersed myself in another culture, really experienced another language. I would have benefitted from “pitching a tent” and living in another culture. We can learn the grammar rules and memorize the verb endings to words, but the way each language gives structure and meaning to concepts and ideas is so different. It’s hard to learn everything from a book.

God’s word is like that too. Yes, there is value to reading and studying scripture. God has given us more than that. God pitched a tent and lived among us, in the person of Jesus, the child born at Christmas.

The Word that was there at the beginning of the world, and who was born in Bethlehem, is a Word still being born in our midst today. And our midst is a mess. Lord, hear our prayer.

Author Brian Doyle, when wondering why we go through the crazy traditions of this holiday season, as his family was putting lights on their tree, wrote:  “And then I remembered too that the ostensible reason for it all was the Love being bold and brave enough to assume a form that would bleed and break and despair and die; and I was again moved, and abashed; and I finished untangling the epic knot of lights, shivering yet again with happiness that we were given such a sweet terrible knot of a world to untangle, as best we can, with bumbling love.”

God’s Word to the world is ultimately a word that is with us and for us, in the midst of our mess, bold and brave enough to experience the joys, the pains, the mundane and the sublime, right alongside us. When we place ourselves right alongside of people who are suffering, people in need, people being persecuted, our lives begin to speak God’s language.

“There is no ending, ever, that is not also a beginning. The world will move forward. We may not be merry, but we will have our holy birth, and we will resist and grow and rise despite it all…..The night might be silent, but, let’s be loud come the morning. We will celebrate Jesus’ birth and be born, and re-born, and born again until each one of everyone and every species and every tree and rock and wave is known as sacred, precious, fierce, lovely, and shot through with Glory.”

What language do we want to speak in the world? As we remember the child born in Bethlehem so many years ago, may we speak the language of God, as shown in the life of the Word made flesh.

One thought on “Found in Translation”