Autumn has always been my favorite season. Crunching through the leaves as I walked to school. Making big piles of leaves into which we would jump with abandon. Even raking leaves, which at times feels like a sisyphian task as the leaves never seem to stop falling and the smell of leaf mold inflames my allergies—even that has gift in it.

photo of Harrison Blvd in Boise, taken by Marty Siebertz

I want the leaves in autumn to last forever, so the trees will hold their color all winter, so I can enjoy the views we’ve been graced with recently.

I’ll let you know how that turns out.

It’s had me thinking about permanence, though. And the lengths to which humans will go to pretend we can keep things from changing.

Solomon inherited the throne from his father King David. God’s golden boy, the favorite one. David—the guy who had Uriah the Hittite killed so he could marry his wife, Bathsheba—the woman who would become Solomon’s mom.

David may have had all of the steadfast love of the Lord, but it didn’t mean his life was simple or that he made good decisions. I think about the stories from David’s palace and wonder what it was like to be Solomon, David’s youngest son, his surviving son. What must it have been like for Solomon to survive a childhood as the son of the “other woman”, with an erratic father–—one minute on top of the world and the next minute disaster?

In this passage, it’s reported that David didn’t build the temple because he was too busy fighting wars and didn’t have time to meet with the architects.

David has a different reason in 1 Chronicles 22, which reports:

“David said to Solomon, ‘My son, I had planned to build a house to the name of the Lord my God. But the word of the Lord came to me, saying, “You have shed much blood and have waged great wars; you shall not build a house to my name, because you have shed so much blood in my sight on the earth. See, a son shall be born to you; he shall be a man of peace. I will give him peace from all his enemies on every side; for his name shall be Solomon, and I will give peace and quiet to Israel in his days. He shall build a house for my name. He shall be a son to me, and I will be a father to him, and I will establish his royal throne in Israel for ever.” Now, my son, said David, the Lord be with you, so that you may succeed in building the house of the Lord your God, as he has spoken concerning you.”

Usually the truth is somewhere in the middle of both accounts, and whatever the motivations, Solomon embarked on this huge public works project, taxing the people huge sums to have money to build the temple.

It took 7 years to build. He had to conscript labor in order to build it—this story is the only other place in Hebrew scripture where the same word they used in the Exodus story for slavery in Egypt is used again.

Pharaoh used slave labor to build pyramids to his own glory.
Solomon used it to build a temple to the glory of God.

I don’t know how that makes you feel, but the darker side to the biblical stories complicate things for me. It reminds me of the time I learned that slave labor was used to build the White House.
Is it still a beautiful building that is part of our history? Yes.
Does it sadden me to see the way slavery is built into the buildings that shape us and our national identity? Yes.

For all the ways we want the Biblical story, and even the stories of our own lives to be well behaved and well mannered ones, the truth is that they are often neither.

We wish we didn’t know stories about people who seek impossible goals, trying to please their parents, as Solomon did building the temple. We wish we didn’t hear stories of our heroes being flawed and participating in systems of oppression.
Wishing doesn’t make it so.

We know we are flawed people, even as we try to act as if we’ve got it all figured out . We even know, at least in our hearts we know, that most of the moments of grace, transformation, and connection that we have in our lives arise out of the messed up places. And yet we want to freeze our story in the few “perfect” moments, like autumn leaves on trees.

Spoiler alert—it won’t stand forever. It was already ruins by the time Jesus wandered through Jerusalem. It was likely already destroyed by the time 1 Kings was being compiled.

We know that human building projects will not last forever, no matter how much we wish they could.

When I traveled on my sabbatical, I toured a lot of ruins. I visited a graveyard in New Jersey where some of my colonial era ancestors are buried. All those names, so carefully etched in stone, have faded away, already lost to time, just a few hundred years on. 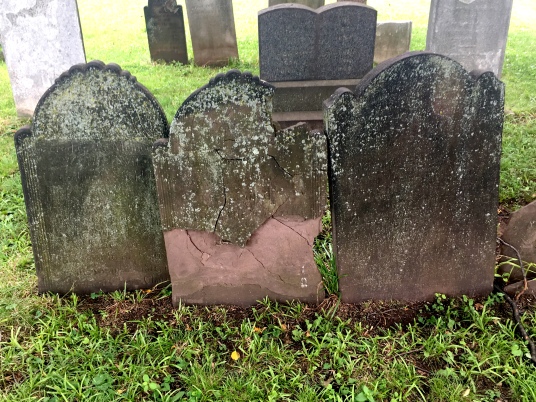 The church next to the graveyard, which one of my ancestors helped build in the 1600s is closing it’s doors because the neighborhood changed around it and the church never responded to the people who moved into the neighborhood. I don’t know what the future looks like for that church, but I’m confident there will be life in that place, even if it’s not the “forever” people imagined when they built it.

From Scotland, I visited Lindisfarne, an early monastic community off the coast of Northumbria in England. It hasn’t been an active site of worship since Henry VIII dissolved the monasteries in the mid 16th century, and many of the walls are tumbled down, yet there was beauty in the ruins. It felt sacred, even if the walls built to hold God are no longer standing. God is still there.

We hear stories of churches closing, or things ending, and we feel sadness, we see the destruction in the ruins.

Do we also see the beauty in the ruins?

Do we see the way God is not confined to our human building projects with the same emotions and expectations we are?

Solomon built the temple as a place for God to dwell forever. In the same sentence, he acknowledges God has stated a divine intention to dwell in “thick darkness”, presumably not requiring 4 walls and a gold roof.

Solomon builds the temple anyway and puts on an extravagant celebration—the biggest temple dedication ever—with an elaborate choreography of processions, priests, and pomp. And God interrupts the plan.

I love this image of God being poorly behaved and refusing to enter the drama on cue. I’m also terrified of this reminder that God is operating with a different script than the one I’m so carefully trying to write.

This week is when we mark the 500th anniversary of the Protestant reformation. October 31, 1517 is when Martin Luther nailed his 95 complaints on the door of the Wittenberg Cathedral. There were many other things happening at about the same time leading to change in the church, but from this point, we mark the beginning of the Reformation.

The medieval Roman church thought it’s foundation was solid. Luther, Zwingli, Calvin, Knox, and others surveyed the walls and said, “we need to fix some of this”.

At first, for Luther, it wasn’t about starting a new denomination. It was about course correcting the church he loved before it sailed off a cliff.

Luther and the other reformers’ stories and lives are as complicated as David or Solomon’s. And it is hard to “celebrate” any schism of the church, even as I recognize I can be your pastor because women’s ordination is a byproduct of the Reformation. While not all change is good, some of it I’m really grateful for. And some of it is well beyond our imagination. It would likely be quite shocking for many of the 16th century reformers to realize their work had led to women’s ordination, or the inclusion of people who are gay, lesbian, or trans in the leadership of the church.

God’s change will not be confined to our buildings or stick to our script.

“ecclesia reformata semper reformanda secundum verbum dei” is the fancy Latin way to sum up what we, as Presbyterian flavored protestants believe. We are “a church reformed, ever reforming, following the Word of God”.

What should be clear to us 500 years after the Reformation began, and a few thousand years after Solomon built a temple to last forever, is that while God does work through the organizational structures and the buildings we build, God is not contained or limited by them. The Spirit of God moves in and through our attempts at permanence and disrupts us, calling us to be ever reforming, ever following the Word of God.

We can’t keep change from coming, whether it’s the leaves abandoning their posts on the tree branches, or mighty temples of stone, turning to dust in the sand. My prayer is that when the glory of the Lord shows up and messes up our plans, we will have hearts open to trust that God is calling us to something new, even if the architecture and structure will look different.

The Reformation is not just a history lesson. As inheritors of the teachings of Martin Luther, John Calvin, John Knox, and others—we are people who believe God is always re-forming us and reforming the church.

What are we building? How are we being re-formed? In all the changes we’re seeing in church and culture, what is being built right now is very much up for debate. I pray our actions, our witness, our compassion in the world will build temples to God’s love, mercy, and peace, and not to our own greatness.

What will people see when they look back 500 years from now, and survey the ruins of 21st century Boise, the way we’re looking back at the Reformation’s beginnings or at Solomon’s Temple? This building may not still be standing. And if it is, I trust they will have replaced the carpet at least. The work you do in the community to share kindness, mercy, hope, and inclusion—I trust and pray God will continue to build something out of that witness of love. It may not be a physical building. God may be constructing scaffolding in people’s hearts that keeps hearts open and expanding, ready to welcome more and more people into their circle of care. Just think about what that might build.

2 thoughts on “What are we building?”