I acknowledge, this psalm is a bit of a bummer. How long, O Lord? Will you forget me forever?

It is quite a contrast, in most ways, to the one we heard last week, that was full of turning toward God in praise and joy. Here, we turn toward God in lament, despair, and fear.

As I said last week, the psalms are a collection of poems and liturgical songs. Which means that while individually, they may focus primarily on one emotion—as a collection, they speak to our experience in the world, encompassing the joy and the sadness, the hope and the despair.

And there is a lot of despair in this one. Worry that enemies will prevail. Anger about God’s silence, which feels like it will go on forever.

We see a lot of despair in the world too.

I want to offer a few ways that the psalmist handles despair differently than we often see in the world around us though. First, this is addressed to “the lead player”, a David psalm, which reminds us that it is intended to be sung in the act of corporate worship, where every voice joins in to sing what appears to be a singular experience of despair.

I understand our tendency to take our despair and go off alone, surrounded by our pain, sure that nobody else could understand, worried that nobody would care. We might feel the powerful truth of “How long, O Lord? Will you forget me forever?” and assume that we are alone in that feeling of isolation. We might assume that everyone else is singing “he walks with me, and he talks with me, and he tells me I am his own” and that we are the only ones facing the silence of God.

Imagine the power of hearing other voices sing your lament? The voices of your church family giving voice to your pain, making it their own, if only for the length of the song, so that you don’t have to carry it alone?

Despair and Lament need to be voiced by us all. On any given day, it may not be our despair, but we know that one day it will be. It is as much a part of our human experience as joy and celebration.

Another consequence of singing your lament publicly is that you are willing to be engaged by the congregation. If you sing your lament only by yourself, in a cave somewhere, nobody else will know.

When people know your lament, of course, you open yourself up to a response. People will offer to help you, which sounds great in the abstract, but can feel uncomfortable when people get all up in your business.

It can be hard to receive help. In my experience, I am much more comfortable offering to help someone else. Letting them help me—that’s an act of faith on my part, to overcome my independence and control issues. When I’ve let people in, of course, it’s been life giving and important. That barely makes it easier to do.

It’s been humbling too, requiring me to acknowledge my inability to pull myself up by my own cowboy bootstraps all the time.

This is a reminder to us all, as people who hear lament, that some answers are fine, and some should, quite frankly, remain unspoken. It is not for us to make claims that “God must have had a plan” that involve the grief and sadness in someone else’s life. If someone wants to make that claim for themselves, that’s one thing. It is not our job. We get to just hold space for people to feel what they are feeling.

It reminds us that the act of being community together is complicated and messy. Mostly we get it right, and offer care and presence. Occasionally, we mess it up. And so we keep coming back to each other with open hearts, with understanding, with prayers of confession, with hope for those moments where we might get it right.

The psalmist begins with 4 versions of the question “how long”.

How long, O Lord? Will you forget me forever?
How long will you hide your face from me?
How long must I bear pain in my soul, and have sorrow in my heart all day long?
How long shall my enemy be exalted over me?

How long is the question of someone who has the faith that there will be an answer, even as they don’t necessarily like the answer.

Often the despair in our world feels more like screaming into a void, from which no answer will arrive. The psalmist doesn’t say “God is going to hide from me forever and I will bear this sorrow forever.” The psalmist has faith there will be an answer.

My friend and bible study partner Ken, who will be preaching for you at July’s Sabbath service, pointed out in our study this week that this psalm reveals a posture of trust from a person in frustration. Trust and Frustration are not mutually exclusive experiences and feelings. They support each other. Our ability to be frustrated and despairing is what gives us the room to trust, and to hold space for the “how long” question to be answered.

If trust only accompanied joy and praise, what would we be trusting in? What need do we have to trust if it’s only possible companion is praise? When all is going well, trust subsides, slips to the back burner.

Robert Alter translates the end of this psalm this way.
“But I in Your kindness do trust,  my heart exults in your rescue”.

I like the present tense emphasis in trust in this translation. It isn’t only a statement of what has been done in the past. It is a claim that I have trusted, I am trusting right now, I will continue on in trusting in the future.

The psalmist is making a claim—even though he can’t hear God’s voice now, he trusts in God’s kindness and rescue.

I’ve been speaking about singular despair, the kind we feel individually about particular situations in our lives. This psalm is also a powerful song to sing about collective despair—about the things going wrong in our community, our nation.

As I was writing this sermon, the news came in that the police officer who shot Philando Castile was found “not guilty” of his murder.

Mr Castile, who was pulled over with a faulty brake light, was legally carrying a gun with a permit. The police officer fired 7 bullets into a car with a 4 year old girl in it. Mr Castile was shot by 5 of those bullets. He was one of over 900 people fatally shot by law enforcement in the US last year. 135 police officers were killed in 2016 too. Our fear, our violence, our internalized racism, and our easy and legal access to guns is killing us.

Wednesday in Arlington, VA a white man opened fire on Republican congress members who were practicing for a charity baseball game. It was the 155th mass shooting in the first 165 days of the calendar year. The shooting at the congressional baseball practice was the sixth such incident last week.

“On Tuesday, eight people were shot in two incidents in Baltimore. On Sunday, nine people were shot during an incident in Chicago, four were shot at a lounge in Tennessee, and four teenagers were shot at an apartment complex in Houston…. Later Wednesday, a UPS employee opened fire at a San Francisco package sorting facility, killing three people and wounding two others. The gunman then fatally shot himself.”

At least 30 people died, 70 are missing, when an apartment building in London was engulfed in flames Wednesday night.

People praying in a mosque in Kabul, Afghanistan were killed when terrorists bombed a Ramadan prayer service, reminding us that terror has no religion.

It is right for us to lift up those cries of lament and grief to the news of the world.

We don’t have to agree about the particulars of a situation to sing together in sadness about the violence and loss in our world.

And so we raise our voices in a psalm of “how long, o Lord, will my prayers be in vain”, as I prayed at the start of worship. That song is 779 in the hymnal, if you want to see the words. Notice the final verse.

Early and late will my tongue sing your praise.
You will uphold me the length of my days
You are a stronghold for all the oppressed.
Hear us, O God, let your people be blessed.

The song moves from the singular “my” to the plural “us”. In addition to the words, which are very different in this verse than they were at the start of the song, much like the psalm, did you hear the music of the final notes? What had been a minor keyed song resolved to a major key.

Our response to the pain and hurt of the world, as shown in the psalm and in the melody of that song, is to hold both the minor key sadness and the hope of the resolution to the major key at the same time. It’s a way of acknowledging the pain and difficulties in the world, without letting go of hope. 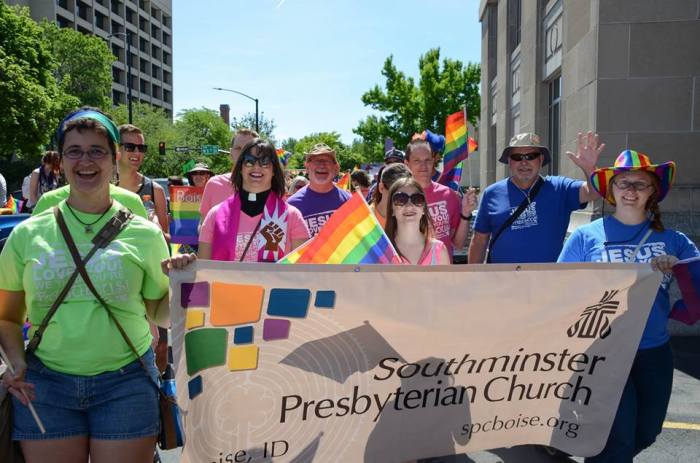 getting ready for the parade

This weekend marked Southminster’s 6th year of participating in Boise’s PRIDE Festival. PRIDE started as a response to a police raid on the Stonewall Inn in Greenwich, NY in June 1969. Starting the next year, PRIDE parades began, primarily in larger cities, like NY, San Francisco, and LA. Boise’s first Gay and Lesbian Freedom Parade and Festival, which was held on Saturday, June 23, 1990.

I suspect those first parades were psalms of lament, cries of sadness at injustice. At the same time, they were claims of hope, which over the years have added new expression, making it a celebration as much as a protest. 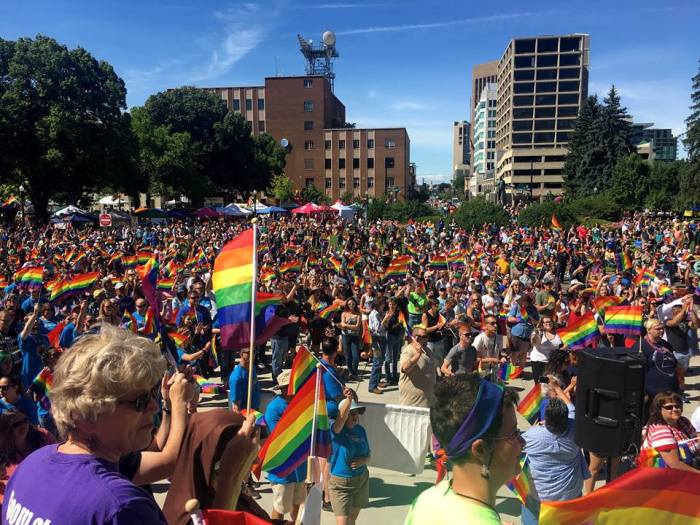 I invite you to sing the final verse with me.

Early and late will my tongue sing your praise.
You will uphold me the length of my days
You are a stronghold for all the oppressed.
Hear us, O God, let your people be blessed.

I am so grateful we do not have to sing our laments and sadness alone. Thank you for being a community that will sing them together.

One thought on “How Long?”