Martyrdom. Ahhh….nothing better than the good news about making people so angry that they kill you?

I confess. I’ve always been conflicted about martyrs—people who die for their beliefs. The root of the word actually means “witness”, so there is a sense that when you witness, when you testify, about your beliefs, and you don’t back down in the face of opposition, it can lead to your death. I’m thankful for the witness of martyrs like Stephen. They challenge me to consider how I am prepared to make a stand for the gospel—
Am I willing to lose my job by preaching the message I have from God and angering you?
Am I willing to be imprisoned?
Am I willing to die?

If I’m being totally honest, I often hear stories of martyrs and think, “but if they could have said what they needed to say with more finesse and compassion, perhaps they would not have been killed, and then they could have lived to preach another day.”

Am I a horrible sellout?

Let’s look at Stephen. The book of Acts tells us he was full of “grace and power”. He was full of “faith and the Holy Spirit”. For goodness sake, he even “had the face of an angel.“

Let’s be clear. The writer of the book of Acts LOVES Stephen. The face of an angel? Really?

And is that even a good thing? Every time people encounter angels in scripture, they have to be told “do not be afraid”. In any case, Stephen was a great leader in the early church. He and his angel face did “great wonders and signs among the people”.

From the report of his testimony before the high priest, I confess I wonder about Stephen. He may be full of grace and power but what about his wisdom? He starts by inclusive language—“our ancestors had the tent of meeting in the wilderness”. He transitions to divisive language—“you stiff necked people….”

He tells them “you are the ones who received the law as ordained by angels and you have not kept it”. Lots of finger pointing.

He’s a bit of a smart aleck in his remarks too. “Which of the prophets did your ancestors not persecute?”

I had an insight into that text from an unlikely place this week. The Brick Testament is a website I’ve shared before. They use Legos to tell the story of scripture. Look at this slide: 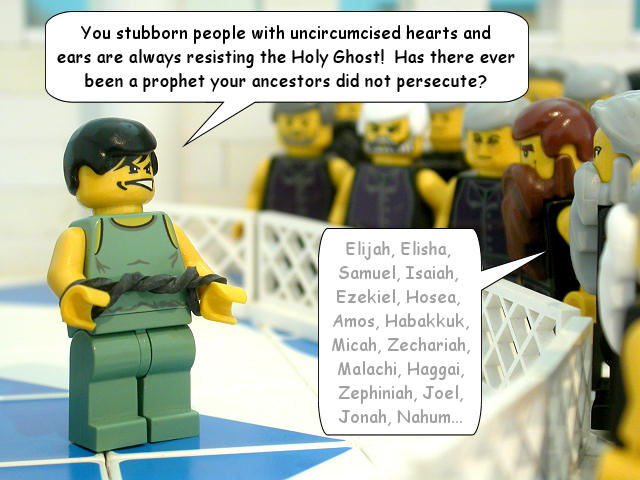 Yes, your pastor is confessing she had an epiphany while looking at Legos.

But the Lego guys are correct. There are plenty of prophets “your” ancestors didn’t persecute. I’d dispute a few of them, but the point remains.

Stephen is being provocative. His biblical interpretation was provocative. His accusations use scripture to be provocative. “You stiff necked people” is a line he steals from a conversation between God and Moses about the feckless Israelites wandering in the desert.

No wonder they “ground their teeth” at Stephen, causing all the dentists to grimace.

And all this makes me wonder if when I think I’m being “wise” by not offending people that I am, in fact, being a coward.

It makes me wonder if when I think I’m being compassionate, I am, in fact, using kindness as an excuse.

I also acknowledge that despite my best efforts, I know the words “not offending”, “compassionate”, and “kindness” are not be in the top 10 words used to describe me. I know I have offended. I know I have not always been kind and compassionate. I try. I promise. I do.

Of course, not all people who testify to their views are martyred.

And not all people who claim to suffer are martyrs.

Yesterday on NPR, I heard someone speak about being willing to go to jail for their beliefs:

“Phil Lyman cared so much about what he sees as his right to drive all-terrain vehicles into Recapture Canyon, he went to jail for it.
“Going into this, you know, I’ve said a number of times, I’m a foot soldier,” the San Juan County, Utah, commissioner says. “I’m not a captain. I’m not a general. I’m willing to die on a battlefield for a good cause.”

Yes. He’s willing to die to be able to drive his ATV in the canyons of his choice. Not all people who “suffer” are martyrs.

I have heard plenty of people speak about being persecuted for their beliefs, when it seems that they facing obstruction because their persecution of others is no longer tolerated by society.

When Christians in the US, for example, speak about persecution, it’s hard to figure. The vast majority of people elected to serve us in all branches of government profess to be Christian. We can all freely gather in this and so many other churches without the government interfering, let alone killing us, for our beliefs. There is a vast diversity of religious expression in the US that is tolerated and allowed.

In Idaho, we even have a faith healing exemption, so that people who claim their religious tradition precludes them from seeking medical help are allowed to let their children die of treatable causes. If there is persecution in this country, it is more likely to be persecution by religion, not of religion.

And maybe you grew up in a tradition that venerates martyrs and marks their feast days, etc. I appreciate the way the stories of the men and women who have died for the faith can inspire us to be bold for the gospel and lead us to courage and perseverance.

Martyrdom is not the only mark of a faithful life. Martyrs are rare in religious history. Many people live out their lives to a ripe old age without ever compromising their faith—think of Mother Teresa. She devoted herself to caring for the poor and was unflinching in the truth of the gospel as she experienced it, no matter how uncomfortable that made other people. She died at 87 years old without ever being burned at the stake. I don’t think any of us would suggest she compromised her faith because she died of old age in her bed.

I’m also grateful for people like Martin Luther King, jr who testified about how the sins of our racism were harming us all. Or Dietrich Bonhoeffer, who refused to collaborate with the Nazis and died at their hands. Or Archbishop Oscar Romero who was assassinated while leading mass for speaking out against poverty, social injustice, assassinations and torture.

One thing that occurs to me about these martyrs we lift up is that we are still talking about them years, centuries, and millennia after their deaths. The witness of their lives becomes something bigger than just the experience of their lives by those who knew them.

We all know the name Joan of Arc, even if we might not remember which particular war the French peasant girl died in, or when. (Hundred Years War, 1431) But she lives on, as an encouragement. We may even know some quotes allegedly uttered by her.

“One life is all we have and we live it as we believe in living it. But to sacrifice what you are and to live without belief, that is a fate more terrible than dying.”

I’m not sure how reliable quotes are of peasant girls from the 1400s that we find on the internet, but they still inspire me.

The stories of martyrs call us to something bigger than ourselves. They remind us that our own personal story is best understood in the service of something beyond our own private success.

And I think that is something we can lose sight of in the practice of American Christianity, where the practice of faith is often quite private and personal. People who are willing to live out their faith, even to the point of death, remind us to look beyond our own needs and wants to live out our faith in service of others.

There was a casual mention of a witness to Stephen’s blasphemous testimony and stoning. Saul, who in a few chapters, will have his own encounter with God and be renamed Paul. As Stephen dies by stoning, the text tells us Saul approved of it. And then Saul will encounter God and understand Stephen’s words and his death in different ways.

Paul will abandon everything to travel the known world, teaching and preaching the Good News of Jesus. He will be imprisoned, and run out of town, and persecuted. Much of our theology comes from this man who witnessed a martyrdom and then, with an encounter of God, lived a transformed life.

I noticed a line in Stephen’s speech that angered the authorities. He said “Yet the Most High does not dwell in houses made by human hands”.

In a letter to the church in Corinth, Paul will write one of my favorite passages of scripture. Listen for resonance to Stephen’s speech.
(2 Cor 4:7-12, 5:1)

“ But we have this treasure in clay jars, so that it may be made clear that this extraordinary power belongs to God and does not come from us. We are afflicted in every way, but not crushed; perplexed, but not driven to despair; persecuted, but not forsaken; struck down, but not destroyed; always carrying in the body the death of Jesus, so that the life of Jesus may also be made visible in our bodies.
For while we live, we are always being given up to death for Jesus’ sake, so that the life of Jesus may be made visible in our mortal flesh. So death is at work in us, but life in you.
For we know that if the earthly tent we live in is destroyed, we have a building from God, a house not made with hands, eternal in the heavens.”

Paul takes Stephen’s phrase about where God doesn’t dwell, and transforms it into an image of where we dwell, in houses not made with hands, eternal in the heavens. He connects the resurrection of Jesus to the death in our own lives.

I can’t help Paul thought of Stephen and the others who died in the faith as he wrote those words.

When we carry the awareness of Good Friday death of Jesus with us in our lives, and have our eyes open to the ways the world wounds, betrays, and harms people then we also make visible the Easter hope of resurrection, and we carry that out to a world in need of reminders of that hope. We return back to the meaning of the word martyr—witness. We become witnesses to life and point people to the life, death, and resurrection of Jesus.