The gospel writers don’t agree about every detail as they tell the story of Jesus. There are some big differences, in fact. And that doesn’t bother me too much.

Each of the gospel writers sees different things in the story of Jesus. And that’s okay. Honestly, it reminds us that we have our own stories to tell and our own experiences of God that need to be shared.

It is also a reminder not to discount other people’s viewpoints, because they might see something we miss. Just because we see things differently doesn’t mean they are wrong.

Someone shared a story about a young couple who moved into a new neighborhood. One morning while eating breakfast, the young woman saw her neighbor hanging the wash outside. “That laundry is not very clean; she doesn’t know how to wash correctly. Perhaps she needs better laundry soap.”

Her husband looks on, remaining silent. Every time her neighbor hangs her wash to dry, the young woman makes the same comments. A month later, the woman is surprised to see a nice clean wash on the line and says to her husband: “Look, she’s finally learned how to do her laundry. I wonder who taught her this? ”

The husband replies, “I got up early this morning and cleaned our windows.”

Our perspective changes how we see the story.

One thing all 4 gospel writers saw, however, despite their own perspectives, is that women were the first people to the tomb on Easter morning.

The women had been there all along, of course.
They followed the procession to the cross, ululating and keening as they went.
They stood and watched as Jesus died.
They accompanied Joseph of Arimathea as Jesus was buried, laid in the tomb.

But now they are there alone. They have gone to the tomb in the early morning hours to anoint his body, to extend the care and affection we show to our loved ones when they die.

And the women, with some trepidation, enter the tomb that should not be open but somehow is.

We know, of course, they won’t find tomb raiders. We know the tomb is empty.

But the women haven’t heard this part of the story before. They’ve never put on their Easter bonnets and sung “Jesus Christ is Risen today” as we do every spring.

They are standing there, burial spices and ointments in hand, wondering what kind of horrible people steal a body, when two men in dazzling clothes appear in their midst.

“Why do you look for the living among the dead?”, they ask the terrified women.

As if Jesus’ body being stolen isn’t bad enough. Now two dazzlingly attired men show up and seem to mansplain the wisdom of their burial rituals.

And this is reason 267 I wasn’t invited to the tomb on Easter morning, because I would have said, “We aren’t looking for the living. Are you daft? Maybe you did not see him die, Mr Fancy Shiny Clothes? But I did. I watched him suffer. And I couldn’t do anything about it. And then I saw his broken body put right here, in this very tomb. So, as soon as you tell me where you’ve put his body, you can take your bedazzled outfits and your ridiculous questions somewhere else.”

Truly, I want to believe one of the women said something like that. But Luke just didn’t write it down.

It wasn’t his perspective.

After Marci Magdalene had her little hissy fit, the men went on to tell the women,

“He is not here, but has risen. Remember how he told you, while he was still in Galilee, that the Son of Man must be handed over to sinners, and be crucified, and on the third day rise again.”

They aren’t instructed to go and tell the other disciples, as recorded in Matthew and Mark. They are just told to remember.

Remember what he taught them.

Remember who he was.

Remember how he loved them.

Remember how he included them.

Remember how he changed everything.

Because he’s really changing everything now. He is not here, but has risen.

And they do remember.

They remember when he disappeared as a teenager and they found him teaching in the temple, as if that were perfectly normal and what was the fuss about anyway?

They remember his baptism by John at the Jordan, when the heavens opened and the Spirit descended on him while the voice from heaven called him the beloved Son.

They remember what it was like to join his band of followers, to hear him teach and be so compelled by his vision for the world that they abandoned their work to follow him.

They remember the miracles, the healings, the nets full of fish, the time he ate at the home of a tax collector.

Mary Magdalene remembers her own healing, what it was like to be free of her demons after living with their voices in her head for so many years.

They remember the stories he told, those weird parables that left them wondering about the meaning, learning to live in mystery, without clear answers.

We weren’t there that morning. But we have our own stories.

Even if you have not been connected to a church, you have stories that you may not even know are inside you.

Of the time you received grace and mercy when we were expecting judgment.

Or of the time when a near stranger sent a card, or delivered a casserole, offering support or encouragement at the moment we needed it most.

Perhaps you remember the people who taught Sunday school classes, with their flannel board stories of Jesus; or the people who generously invested in your life when they weren’t required to (the way your family is).

We remember the feeling of presence in the quiet of a hospital room, giving us strength to sit vigil through the night at a loved one’s side.

Whatever our experiences may have been, we are called to remember them. And we share them with others, inviting them to listen for the divine presence in their own lives.

We are like the women at the tomb that morning, whose remembering compels them back to the disciples where they testify about what they have seen. 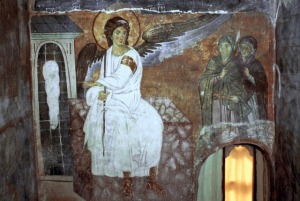 I don’t know about you, but I’m full up of men telling me to get in line and stop having a different opinion than they have. Patriarchal lairos.  I guarantee this is neither the first nor last time that women’s experience has been dismissed by people in a demeaning way.

I know this behavior happens regardless of gender identity.

But when a person starts telling me what I do or do not know, and dismisses my experience out of hand because it doesn’t square with what they think they know? Ooh boy, it does not go well. Fired up!

The women were not, as we know, full of lairos. We know they were reporting their experience back to the disciples who hadn’t been there. We know that without their idle tales, we wouldn’t have accounts of that early morning.

They didn’t tell strangers on the street. They told the other disciples, the one group of people who might possibly have been able to believe such a crazy story. And their story wasn’t believed.

And that is a risk we take, when we testify. We share our experiences, regardless of how they will be received, because the good news refuses to remain in the tomb.

And people may tell us we are full of lairos. And that’s okay. Because our job isn’t to convince anyone.

That is God’s job.

And it is okay when they tell us we are full of lairos because, in fact, it is a startling story when the dead don’t stay dead.  If it doesn’t startle us, are we really paying attention?

People may tell us we are full of lairos. And that’s okay.
Our job is to remember. And then to witness.

This week, Jim Wallis wrote: “Hope unbelieved is always considered nonsense. But hope believed is history in the process of being changed.”

The men may have told the women they were delusional, but as soon as the women went back to the kitchen to prepare breakfast, Peter took off to see for himself. He came home amazed at what he saw. Where’s the lairos now, Peter?

It became hope believed for Peter, who went on to be the rock upon which Jesus built the church.

Hope believed is our job, even as people consider it nonsense. Wallis writes:

And with this hope, sisters and brothers, we can know our sins forgiven, and our lives made whole. We can look into the faces of our children and believe there is a future for them.

So this morning we remember these women and their willingness to approach death and tombs to show their love.

We remember the way they encountered new life and remembered the stories of grace and mercy.

We remember how they testified to what they had experienced, willing to bear the accusations of men who told them they were nuts.

And we remember the men who accused them of telling idle tales but then went to see for themselves, so that hope unbelieved could be transformed into history being changed.

As you live into this Easter season, remember and witness, believe in hope. God will do the rest. Thanks be to God. Amen.