Today, the Narrative Lectionary drops us in the story of Elijah. Elijah is a pivotal figure in the history of Israel and is in the minds of many of our New Testament authors. It is to Elijah that John the Baptist and Jesus are often connected, so knowing the story of Elijah will help you understand how 1st Century Jews understood the person of Jesus of Nazareth. Additionally, the story of Elijah is just great storytelling.

As Elijah’s story begins, Ahab is king of Israel. So the united kingdom that David’s son Solomon had inherited has divided into the Northern Kindgom of Israel and the Southern Kingdom of Judah.

And Ahab, in the Northern Kingdom, is more evil than any king before him, which is saying something because many of the kings before him were about as evil as you could imagine. In addition to being a bad and evil king, Ahab also married Jezebel, who was Phoenician, from the city of Sidon, shown in blue at the top of the map. While there are plenty of biblical examples of foreigners being faithful and good members of society, Jezebel would not be one of them.

Jezebel and Ahab are the poster children of evil, idol worshipping, unfaithful, bad, bad leaders. And Jezebel gives a face to the Biblical campaign against intermarriage. “See—we told you what would happen when you married foreign women!”

And so Elijah appears on the scene to tell Ahab, “as the Lord, the God of Israel lives, there shall be neither dew nor rain these years, except by my word”. The punishment for Ahab’s evil is a drought.

And while the drought may come because of the Word of God, note that sustenance in the midst of drought come from God as well. God instructs Elijah to a wadi, or a riverbed or canyon, where there is water. And the ravens feed him in the morning and the evening. So before we move on to the rest of this story, remember that the life of faith is not a promise that you won’t go through a drought. The life of faith says that when you are in a proverbial drought, God will provide. It may just be water in a nearly dry riverbed and food provided by birds, but God does not leave us alone.

Eventually even the riverbed runs dry and the Word of the Lord sends Elijah to someone for help. He goes to Zarephath, a Phoenician town near Sidon, which today would be in Lebanon. 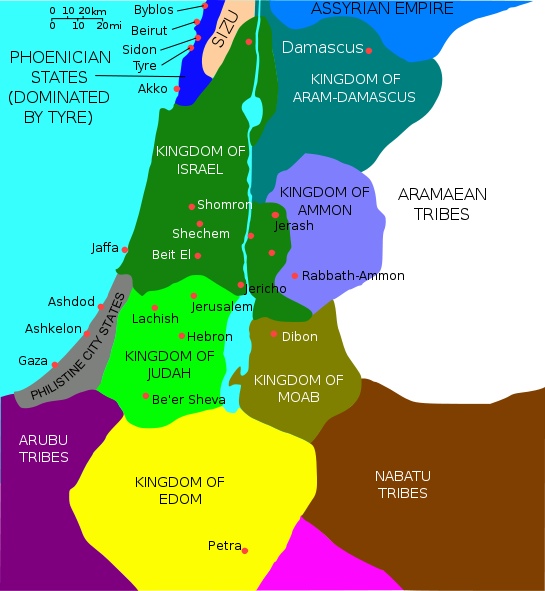 The Word of the Lord sends Elijah to one of these foreign women the rest of the Bible keeps warning us about. And a widow, at that. Women left their own families when they were married and became a part of their husband’s family. But her husband is dead. And a woman without a man to look out for her is in trouble in that culture. This widow, as it turns out, is preparing to make her own last supper. She’s out of food and resources. She and her son are about to die from lack of food.

And Elijah asks her to bring him some water and some bread.

I’m not sure how I would feel if I were about to die and some other God’s prophet came and asked for my last little bit of food. I suspect my answer would not have been nearly as nice as hers.

Elijah gives her an answer that we normally hear from angels when they encounter humans—“Do not be afraid.” What follows the Word of the Lord’s instructions to share her food is a blessing.

Do not be afraid. You may think you are about to die, but you’re not.

Do not be afraid. You may not think you have enough to share, but you do.

Do not be afraid. God doesn’t ask you to give your last food unless God is about to do something big.

Elijah goes on to tell the woman that her jar of meal will not run empty and her jug of oil will not fail. Until the rains fall again, she will have enough to eat.

Elijah is great and all. Don’t get me wrong. I’m a big fan. But this widow from Zarephath is my new hero. Perhaps her husband’s family would have taken care of her in normal times, but they are in a drought, the worst economic situation since the Great Depression. She’s on her own. Food stamps have been cut off.

And she’s not even an Israelite. Did you notice what she said to Elijah? “As the Lord, YOUR God, lives, I have nothing baked…” This isn’t even her God she’s helping out.

And then, in a great act of faith, she takes the last of her meal, scraping out the bottom of the jar with her spatula to get every last bit, and she takes the last of her oil, shaking the jug upside down over the pot until all of the oil has drip, drip dripped its way out of the jug, and she puts it in the oven. She didn’t have enough to sustain herself and her son, yet she trusts the word of Elijah’s God and offers that small loaf to sustain her, her son, and Elijah.

She does not say, as soon as God fills up my pantry, I’d be happy to make you some bread.

She does not say, I’d love to help you, but times are tight. Surely you understand why I can’t increase my pledge this year.

She does not say, I’d love to help you, but I don’t know you and I’m not sure what you did to end up hungry but it might be your fault.

She doesn’t ask Elijah to explain how he got himself in this situation. He’s hungry. She feeds him. Possibly at risk to herself and her child. She doesn’t wait for proof from God either. She hears the Word of someone else’s God and she responds in faith. At the very least, this text ought to remind us to be in conversation and relationship with people who worship God differently than we do.

We’re beginning our Stewardship Campaign and beginning to plan for the 2017 budget and the parallels are strong between this text and our lives. Our community has known drought.  Yet the Word of the Lord comes to us and says,

Do not be afraid. You may think you are out of resources, but you’re not.

Do not be afraid. You may not think you have enough to share, but you do.

Do not be afraid. God doesn’t ask you to give unless God is about to do something big.

Our task is similar to what the widow of Zarephath experienced. We listen for the Word of God to come to us, even if we’re in the midst of an economic drought. Then we trust the Word of God and go out on faith to do something important. Because Stewardship happens in that order too. We don’t wait for something great to get started and then say, “okay, I’ll support that”.

Stewardship is an act of faith, of saying, “Here’s what I’ll contribute to what God is dreaming to do with Southminster in our community”. And then, once your pledges are in, the Session can build the budget.

We have to bake our loaves even before God has filled the jars with meal and the jugs with oil.

By committing to pledge to Southminster, each year you are like the widow from Zaraphath, answering God’s call to be a witness of faith in this community.

If every person at Southminster pledged what they could pledge, do you know what we could do?

The act of taking out a mortgage in order to begin construction in the spring is a little big like scraping the jar clean to bake a loaf of bread before we know when the resupply truck will arrive. Additionally, ten percent of our budget currently goes to mission work in the church. This year we’d like to increase that to support more local agencies. Think about the people in our community who could be fed, and clothed, and supported as they get back on their feet and out of homelessness. Each of us, individually, may be able to just do a little. But when we respond to God’s call, our jars will never run empty and our jugs will always have oil.

But as we read the text, we realize that the feeding isn’t the real miracle. At least it isn’t the only one. What the work of nourishment does is set in place the chance for new life.

The widow’s son falls ill and dies. But Elijah cries out to God, using his own words to seek a miracle. And the Lord listens to Elijah and life returns to the widow’s son.

All of our work in stewardship, planning, and administering the work of the church is not just so we can say we have planned, budgeted and worked. It is so we can be a place of miracles. Who knows what God may do yet in this place!

When the widow invited Elijah into her home, her son wasn’t ill. She didn’t let him so he could heal her son. This miracle was something she couldn’t even imagine she would need.

This week, thinking about the widow, I’ve been thinking about the people in need of miracles, in need of the abundance of ‘enough’, in our community. It occurred to me that God’s heart was breaking for this widow before she even knew her son would need a miracle. One could say Elijah was sent to her house for his own provision. God saw the bigger picture. Maybe God sent Elijah to the widow because God’s heart was breaking for her.

We’ve been asking you this fall to think about what might be breaking God’s heart in our neighborhood. Who might God need to connect us with in order to heal a heartbreak? One topic the Outreach committee has started looking at is domestic violence and human trafficking.

(At this point in the service, I invited the Victim Witness Coordinator with the Boise Police Department to share with us about those topics. She was available after worship to give more information and answer questions for adults in the Genesis room, but we wanted everyone to hear about this, at least in broad strokes, and to know that it happens in our community, in our very neighborhood.)

The widow of Zarephath is not just a story of a vulnerable woman long ago and far away from here. It’s a story that plays out in our own neighborhood.

Let’s imagine that God is showing up on our doorstep, asking for us to trust that our resources will be an abundance of enough. Enough for us. Enough to help others. Enough to nurture miracles. Let us listen for the word of the Lord in the midst of our lives, so we may respond in faith. And may we be on the lookout for miracles that will result. Amen.

2 thoughts on “Abundance of Enough”