Thank you to everyone who has been following along this time of discovery. Ever since receiving my original birth certificate in August, I’ve been on quite the journey.

It’s all been good. I’m quite sure I have not  processed it all yet. And it is not only my story, so bear with me if the usual level of detail may be missing.

Forgive me, too, as available language fails to adequately explain my relationships these days. “Sister” seems such a simple word, right? But I have my sister, Annette, who has been my sister for the last 46 years and certainly deserves some medal for putting up with me as her sister. And I have my sister Carol, the daughter of my birth father, who didn’t know I existed until I called her up out of the blue last month. The same word doesn’t seem adequate to apply to both. Modifiers don’t work easily either. My “new” sister and “old’ sister? My “real” sister? My “birth” sister?

Same is true with “mom” and “dad”, who will always be George and Esther. Those names feel like titles they earned in the living out of the relationship as my parents. My birth parents are not mom and dad. They are my birth mother and birth father. Sophia and Ken. I’m grateful to them both for the gift of life. I look like them (more on that here) and share their genes.  But I will never have a relationship with either of them. Sophia doesn’t want a relationship with me, which is her right and I respect that. I will never fully know what she went through in 1968 to give me life. Ken died in 1996, so I will never know him either.

Last Sunday I flew to Seattle to meet Carol, my half-birth-sister. (My new sister? My sister? Carol.)

My parents and my sister Annette picked me up at the airport and we drove to Carol’s house. Walking into Carol’s house felt like coming back to a place I just hadn’t visited in a long time. It felt very comfortable. Like putting on a glove that was made for your hand.

I got to meet Carol’s son and his wife and their son. My new nephew is actually older than me by a few years. Meeting Carol’s daughter and her family will have to be for the next trip because of work and school schedules.

Carol had a brother Jim, and he passed away about 10 years ago. So I’ll never get to know him, but I did get to meet his wonderful daughter.

We had a great afternoon and a long and leisurely lunch. They were so kind and welcoming. It was really humbling to be on the receiving end of that kind of grace. 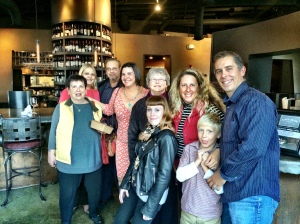 These are some quality people right there.

After everyone else had gone home and it was just Carol and I, she gave me a tour. I saw the house where she grew up, and the condo where her dad and mom moved when they downsized in retirement. We went to the cemetery where her mom, dad, and Jim are buried. I’m not normally a fan of cemeteries, but this was beautiful. On a hill in Bellevue, overlooking Lake Washington with Seattle in the distance.

Then we went to dinner with Jan, our second cousin (once removed), who has done all of the genealogical research. She and her husband were delightful people and it was great to have my “tribe” expand so much in one day.  Carol and Jan did not know each other either, so the three of us were all new to the relationship. 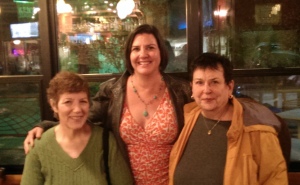 Jan’s mother is the woman I first saw the resemblance to. (Just look at the three of us together. We have the same left eyebrows! Clearly my height comes from somewhere else).

I found a picture of my birth mother online last week. I won’t share it here because she is still alive and doesn’t want to be revealed. Trust me-I look A LOT like her. Finding that picture was a very emotional moment for me. It is her senior yearbook picture from 1946 and the resemblance is startling.

So, there is lots still to be determined. Thanks for following along as this story plays out.