A sermon preached at Southminster Presbyterian Church on December 29, 2013 by Marci Auld Glass.

And our story today picks up after the visit of the magi, which we’ll read next week on Epiphany. But the magi go to Herod and ask him where they can find the king who was born, so they can come and pay him homage.

It is less clear why “all Jerusalem” was frightened with Herod. I wonder if people living under occupation ended up feeling thankful for stability, even if they wished for freedom. News of a new king born, a threat to Herod—would that just leave them wondering if they would be displaced in the civil war that would come? ‘All of Jerusalem’ would be the pawns lost in that chess game.

We’ll hear about the magi’s journey next week.

But today, we’re left with the aftermath.

The first one told him not to be afraid to marry a pregnant Mary.

This one tells him to flee to Egypt, for there is much to be afraid of if they stay.

And again, Joseph trusts the divine messenger and they hightail it out of Dodge that very night, grabbing whatever they can fit in a duffel bag, and flee in terror. Interestingly, I think these may be the only angelic proclamations in scripture that don’t involve the words “do not fear”.

Herod “sent his men and killed all the children in and around Bethlehem who were two years old or under, according to the time that he had learned from the wise men.”

I hate this story.

I know what Matthew is trying to do. He wants us to recognize a connection between Jesus’ story and that of Moses. Herod is just the actor starring as Pharaoh in this version of the tragedy, and Jesus is the inheritor of the role of Moses. Matthew doesn’t have them flee to Damascus or Athens. He sends them back to the stage where the Exodus plays out—Egypt.

I know what he’s trying to do, but that doesn’t make me like it.

I don’t like it in the Exodus narrative either. The slaughter of the innocents demands a re-write. Who writes a story where babies are slaughtered?

‘A voice was heard in Ramah,
wailing and loud lamentation,
Rachel weeping for her children;
she refused to be consoled, because they are no more.’

Rachel was one of Jacob’s wives, and in Jeremiah’s day, she was weeping for her descendants, pawns in another chess match between world powers.

She weeps for descendants further down the family tree when Herod kills them too.

And she weeps today.

Because the story I want to re-write is still being written, it is still playing out on bloody stages across the world.

We just marked the one year anniversary of the shooting at Newtown. Innocent children slaughtered so another kind of narrative can be told.

Palestinian children are still dying in the towns where this very story took place.

‘A voice was heard in Ramah,
wailing and loud lamentation,
Rachel weeping for her children;
she refused to be consoled, because they are no more.’

Children all over the world have had to flee their homes and head to refugee camps because of war, and disaster, and modern day Herods and Pharaohs.

When we hear stories on the news like this one Matthew tells, we need to remember the birth of Jesus.

God chose to be born a fragile human baby, to become flesh and move into the neighborhood, even a neighborhood subjected to the whims and terrors of Herod. When we experience the terrors of the world, when the darkness closes in, we remember God rushed headlong into that same kind of world, and he shined a light. Even when we’re in the midst of the worst tragedies we can imagine, God is there.

And the story in Matthew doesn’t end with slaughter and weeping.

It ends with a new beginning.

The family flees to Egypt. They join in with all of the other families throughout history who know what it is like to be displaced and on the road, as refugees. And they adapt and make do. They make friends and build a life in a foreign place.

And then they go home, but not to Bethlehem. They move to Nazareth.

Luke and Matthew do not agree on all details of Jesus’ birth. Luke’s account, which we hear on Christmas Eve each year, says the family was from Nazareth, went to Bethlehem for the census, and then returned home to Nazareth, with no mention of the exile in Egypt.

And Matthew’s account of the story has Jesus born in his hometown of Bethlehem. Then, after the exile in Egypt, they move to Nazareth and re-settle there to avoid having to deal with Herod’s son in Bethlehem, who inherited the throne upon Herod’s death.

And they begin anew. They find a house, Joseph finds work. Mary hangs out with the other women, gathering water at the well and buying garbanzo beans at the market. Jesus runs through the streets of Nazareth, playing with the other boys, herding the goats, and helping with chores.

Or at least we imagine it played out like that. Matthew doesn’t report any news of Jesus’ life from when they move to Nazareth until Jesus’ public ministry begins 30 or so years later.

And while part of me wants the full story with all of the details, the rest of me is thankful for those undocumented years.

Because part of the work of the gospels is to invite us in to the story. And perhaps it is easier to do that when a part of the story is left for us to imagine for ourselves. We may not know what it was like to live under Roman occupation, but we know what it is like to move to a new home, to build a new life, to start again.

The incarnation, God becoming flesh and moving into the neighborhood, still invites us to seek the light that shines—in the very bad news of infanticide, and in the mundane news of new neighbors. As we continue in this Christmas season, as we take down our trees and pack up the garlands for next year, we are invited into the work of incarnation—of being on the lookout for where God’s light is shining and helping reflect it for others to see. 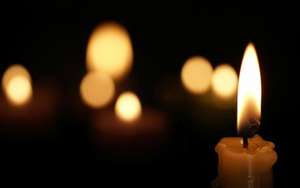 God’s incarnation calls us into those moments we’d just as soon ignore, speaking truth to the powers of the world when they neglect to care for the vulnerable among us, bringing love and comfort to those who weep and face devastation, and reaching out in friendship to people we meet in the neighborhood, at the market, or on the playground.

When we bring light in any of those situations, we continue to join the incarnational proclamation that God’s light shines in the darkness, and the darkness has not, can not, and will not, overcome it.

Thanks be to God.

One thought on “Incarnation in the Darkness”